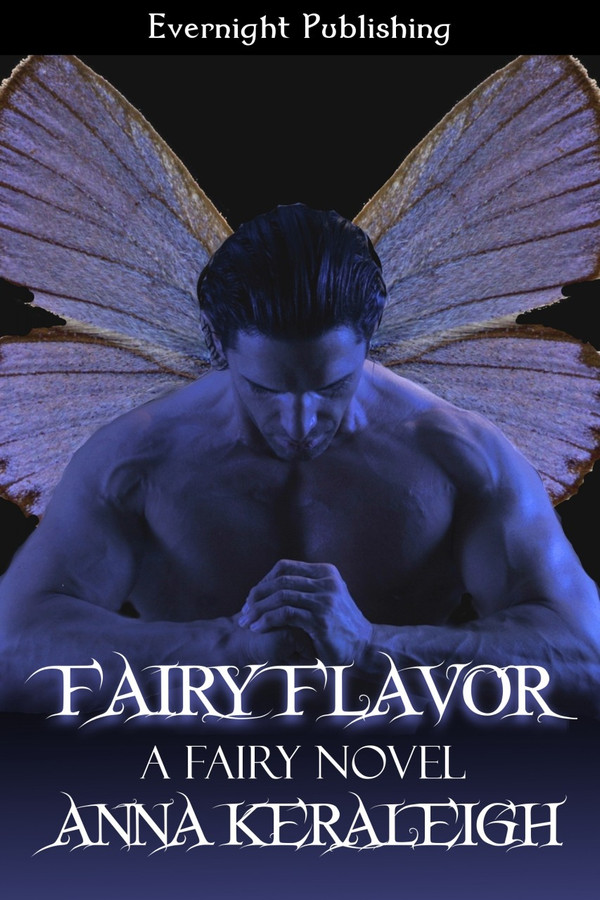 The fairies are going extinct. The trolls are trying to take the land for their own nefarious purposes and King Carrick, ruler of the fairy kingdom, has found a human mate. Now he just has to convince her to stay amidst the chaos.

Brook finds herself in love with a fairy, as if that isn’t strange enough, she’s kidnapped by the trolls and asked to be queen of this fantasy kingdom. Her heart screams approval but a man named Valen and some deadly trolls stand between them.

A sizzling hot read from start to finish! Fairy Flavor stars off with Brook, the heroine, having amazing sex with a mysterious man. She’s certain it’s all a dream that soon she’ll wake from but soon learns of the reality. Fairies exist and they need her help. King Carrick needs Brook to reproduce as the fairy race is dying. I loved Brook. She was a very strong, modern, and independent woman. The little glimmer of her past made me enjoy her ever more. She had some factors that made her very relatable. Carrick was sweet, always horny, and kind. I enjoyed him, although at times he came off as a little too soft. There were a lot of other fairy men like Whisper, who I really enjoyed. I would love to read a book with him as the lead. The introduction of Valen brought a great twist to the story. Valen was likable and hatable at the same time. On the one hand, he was very heroic, brave, and loving. Yet, there were some things he did that made him seem almost abusive. I loved the scene with him and Grace or was it Bridget, near the end. It really made me want to learn more about him. It did become confusing reading about all those fairies. Some of them had similar names so it was hard to remember who is who. I really enjoyed the entire book and all of the characters. The fairy kingdom was very original. I haven’t read anything like this before. I would read future works by this author. If you want a sexy erotic read with a plot, this is a winner!

Anna Keraleigh sends us into the world of the fairies with Fairy Flavor, a book of fantasy, romance and love that we all dream of. The characters make you feel as if the story is happening to you, by making you relate to what is going on. It is a wonderful story that I will be recommending to friends and family alike. Brook believes she is dreaming when a male fairy takes her in his arms and makes her feel beautiful in more way than one. But knowing it can’t last she tries to wake up but realizes that it is real when Carrick makes her realize it is not a dream. But how could a fairy like him want someone like her and why? Carrick explains to her they are going extinct because of the trolls and even more. What will happen to them, and why does he want her?

Looking to escape the bad memories of a painful marriage and divorce, thirty-five year old Brook leaves Los Angeles for the peaceful coast of Ireland. Out for a walk one afternoon, she meets a beautiful, six foot tall fairy man who whisks her away to his hidden kingdom. Brook learns that he is not just a fairy, but the king of the fairies named Carrick. Carrick is desperate to find a way to save his people. Infertility has plagued the fairies for many decades, and now only a handful remain. It is thought that fairies can successfully reproduce with certain humans who have the ability to see them. When he discovers Brook can see him, Carrick is certain that fate has brought him to his future queen. The fairy kingdom is unlike anything Brook has experienced before, and it&#039;s not long before she&#039;s fallen for King Carrick. His is a magical world full of sensual delights. However, there is darkness in their land as well. Not only are they faced with extinction, but they are also threatened by trolls who want to take their land. When the trolls learn of the potential new fairy queen, they kidnap Brook to use as leverage against Carrick. However, it turns out the biggest threat to Carrick and Brook&#039;s happily ever after may be a mysterious &quot;outsider&quot; fairy named Valen. I love stories set in Ireland and fairy lore, so I was excited to dive into the world created by Anna Keraleigh. If you like your books to start out hot and steamy, then you&#039;ll love FAIRY FLAVOR. Carrick, with a little help from his friend Wick, shows Brook the erotic talents that fairies are blessed with. The most important part of the story happens later in the book after Brook is kidnapped by the trolls. Carrick&#039;s quest to save her, and Brook&#039;s encounter with Valen really stir up the emotions of the characters. I must say that Valen stole my heart. I really enjoyed getting to know all of the fairies and learning about their whimsical and yet dangerous world. My one complaint would be that Brook who was a lawyer didn&#039;t act or speak the way I&#039;d think a lawyer would. She was a bit too quick to accept everything that Carrick told her and to fall head over heals for this fairy king. I would expect an attorney to be more pragmatic about this bizarre situation. FAIRY FLAVOR was a captivating fantasy erotic romance with plenty of action and heat. (Wait until you discover what the &quot;flavor&quot; is referring to!) The story ends with an exciting cliff hanger that will leave you wanting to know what happens next. If you&#039;ve never thought of fairies as particularly sexy, this book just might change your mind. I really liked it, so I&#039;m giving FAIRY FLAVOR 4 out of 5 stars.

The plot is definitely original, an entire kingdom of fairies that only some of us can see. They only decided to join us because of a population problem and the King finds a woman that may just be his mate. Ms. Keraleigh paints a vibrant fantasy world with her words. The characters are a wonderful treat. They unravel beautifully as the book progresses. Of course, I’ve quickly found my favorite fairy, I have a feeling everyone who reads this book will choose at least one hunky male for their fantasies. I could not decide on just one, it was a tie between the sweet, horny Wick and the mysterious Whisper. The dialogue was a bit choppy and Brook seemed to have serious issues choosing just one man. I can honestly say I understand her dilemma. Hot King, playful ‘licker’ or sexy wingless, What’s a girl to do? This is positively a recommended read. I can’t wait to read the next in the series.

Oh no, don&#039;t be shakin&#039; that head! I was skeptical at first, too. Fairies, with wings *chuckle* come on! It sounded silly to me, but once I started reading, these &quot;muscled models&quot; wearing loincloths had me hooked! Ms. Keraleigh has written a whimsical fairy world full of scrumptious fairy men and women. I want more Wick and Whisper! What happened to Thame?!? And, yes, dammit, Valen too!!! Look for our review with Ms. Keraleigh on April 16th!

After reading the little blurb I jumped at the chance to read this. I mean hunky sexy fairies, Fairy King and Kingdom, a choice between two drool worthy men. Yup, had to read it. I prayed when I opened it up on my Nook that this would be a good read, that I wouldn&#039;t be disappointed..well I wasn&#039;t. My engine was revved from almost the first page and didn&#039;t whine down till I hit the last page!! This book is a full force erotic paranormal dream put to paper!! I was sucked into the story and didn&#039;t want to leave! The relationships and emotions that Anna brings out with her words easily brought the story to life. I could almost see the steamy, hunky, love scenes through Brooke&#039;s eyes, feel it through her skin...Hot Hot Hot!! This book will get you worked up and wanting more more more! I could easily fantasize myself hopping in to become the &quot;love&quot; of any of the lonely, single male fairies of this world. (Anna feel free to write me in anytime!) I do have to admit when I hit that last page I wanted to scream...I have to know what happens next and sincerely hope to see another in this series soon! If you enjoy a good erotic story, if you love fairies,trolls,or any other fae, and diving into their world then you need to go get this book! Look for my interview with the Author soon! Until next time, take the time to escape reality, take the time to read.

Well now doesn&#039;t that sound cool? Fairies, trolls, a king... all the ingredients of something with a bit of... erm... flavor. So with a fabbo description, and having a bit of a thing myself for fairies, I was intrigued to click this book open and enter Keraleigh&#039;s world. I&#039;m going to say immediately that I did not like the beginning. A couple of pages in I was hmming and haaing--and my main reason for this is the fact that the dialogue was a bit choppaliscous and Brooke a bit too accepting of the whole shabboodle. Keraleigh could, imo, have started the thing with more of a wham. Fear not though readers, fear not! I implore you to race through these first pages and immerse yourself in the story proper, because oh what a world Keraleigh creates. You should know by now that I don&#039;t give away plots, but I can say that her imagination has created a whimsical world, where luscious fairies wander and things certainly get a lot of flavor. I was totally pulled into the whole thing, her descriptive prose is quite fantastic, and yeah ok, the dialogue chops it up now and then, comes across as a little stilted at time--but you know what, who gives a heck! I was captivated and titillated all at once, smiling as I navigated my way through the story. I liked Brooke, and Karrick was certainly kingly--they made a likeable and believable couple. The show stealer of the whole book for me though was Valen, poor wingless Valen. Send him my way Keraleigh! I will take him and mend his broken heart! I guess I should really give this a 4 heart review, because of the few issues I&#039;ve pointed out, but you know what I&#039;m not going to. I love the world so much, loved the whole concept, that Keraleigh&#039;s getting a 5 heart shout out. I warn though this will be removed immediately if the next story is not Valen&#039;s! Please, please Keraleigh I ask you now... in fact I demand... it better be Valen&#039;s story!!!!!!