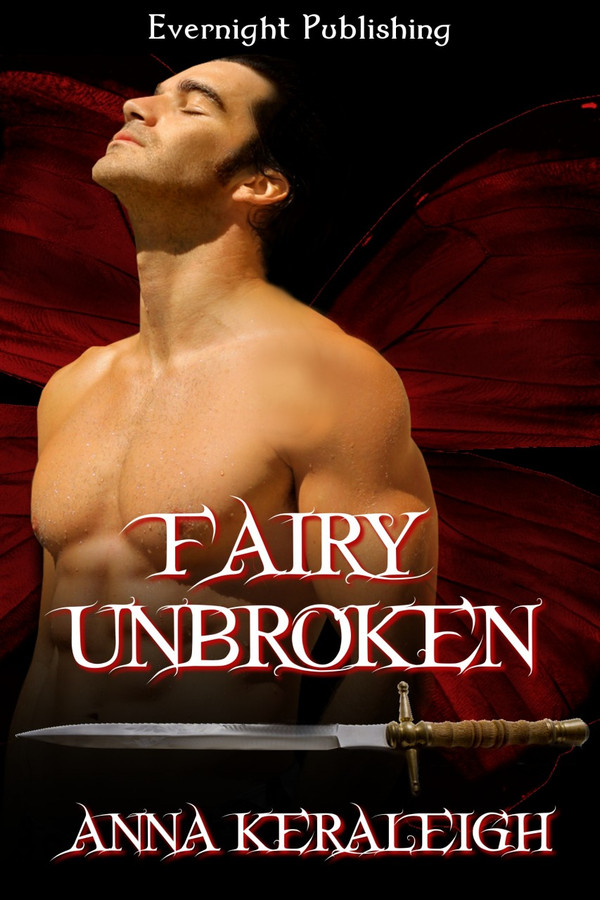 What happens when the human-hater finds his human mate?

When Keyn was a boy, he fell from the sky. Cruel human men found him and the child within ceased to exist. Now he lives for battle. His sole purpose in life is to protect the King and Queen from threats, but he has a secret. Every night when memories plague him, he wakes and flies to her. His mate. Found long ago and one he does not want to claim.

Trillian has enough on her plate with a dying brother. When creatures attack, she’s thrust in a mythical world turned real and confronted with attempts on her life. She wants nothing to do with the fairy kingdom until her brother takes a turn for the worst and a little fairy help may just save his life.

Can Keyn get past his hatred and let Trillian heal his broken soul?

“My poor, sweet fairy.” She held his head and pulled him up for a gentle, quick kiss. Trillian stepped back. She unbelted her jeans, and slid them down her hips. They pooled at her feet and she stepped out of them. There was determination in her movements. She was indomitable, ready to seduce and conquer Keyn. Trillian would heal his broken soul. At least, that was the plan.

She reached out and tugged at his loincloth. Two good pulls and it unraveled. She practically gasped as it fell at his feet. No wonder she felt so full. He was a very big boy. She licked her lips and went to her knees. “Sit on the edge of the tub.”

“Oh, this is going to be fun.” Trillian spread his knees so she could kneel between them. Then she gripped his hard shaft in her hands. He jumped up and jerked away. “Hey. Get back here.”

Well, hell. “You don’t want me to touch your penis. To wrap my lips around it and suck.”

“No, this was a bad idea.” His wings fluttered nervously.

“Keyn.” Trillian stood. “How did you get those scars?” She pointed at his cock, which pulsed and remained a battering ram between his legs.

“I cannot do this.” He turned away.

“Damn it, Keyn. I am trying to make this work. We can be lonely apart or we can work on this mating thing together. I’m sure as hell sick of making my own orgasms.”

He stopped. His voice sounded shaky and weak. “I don’t know if I can do this, Trillian.” His head hung. “The memories, your human smell, your human touches...they overwhelm me.”

She splashed loudly with her panties still on and landed with an ungraceful splat in the tub. The warm water flowed over body and temporarily cooled the lust between her legs. “Then come sit in here with me. It’s just water.”

His cock bobbed as he approached. When he lifted a leg to get in, she got a dazzling view of his heavy balls and couldn’t resist the lick of her lips. The water rose as he sat across from her, their legs touching ever so lightly. She turned the water off, and in silence, they sat. Trillian would wait. He’d saved Cameron. The least she could do was give him some time, maybe a second or third or fourth chance.

He cleared his throat.

“Keyn, what happened when you fell from the sky?”

He gasped and looked away. Finally, he said, “I landed bruised and injured but I wasn’t broken. Not yet. Not until they came.”

“Who?” She reached out, and under the water, her thumb rubbed against his ankle.

“The humans. The human men.”

Trillian stopped. Suddenly, she understood. Her lips parted but no sound emerged. Men in the woods found an injured fairy in a loincloth. “Oh, Keyn, they...” Tears were blurring her vision.

He glanced at her and nodded. “First they...touched it and...” He swallowed hard again. His chest was beginning to heave, his body shivering. Keyn surged to his feet, water cascading down his delicious body as he charged toward the window.

Trillian struggled to follow and nearly landed on her face. Keyn was there, catching her, helping her to stand.

“I am broken, beyond repair.”

I didn’t know how this book would go when I started reading it. I never knew it would go the way it did. Keyn distrusts humans and he has a really good reason for that. The fates have a bad sense of humor when they gave Keyn a human mate named Trillian. Every time he gets close to a human or smells one he goes into panic mode. Trillian never knew that other things existed until she was chased by trolls and saved by a man that had red and black wings. All she ever wanted was a way to save her brothers life. She never thought she would be a mate to a fairy. I could feel the pain that Keyn was feeling. I understand having to go through something as painful as he did and then having to live and try to face his demons. It is something that I had to do myself. I remember how sick I felt when I had to face the darkness. How anyone could do that to a defenseless person is beyond me. The author knows how to weave a story. You never think that a fairy would have to face things like Keyn did but you realize that life doesn’t care who or what you are. There is always someone there that will help you get through what life gives you and will help you see the light that is at the end of the tunnel. If you love stories with fairies and other mystical creatures then this is the book for you.

This is the third book in the fairy series. Keyn was abused as a child and learned to close his heart to others, which is easy to do when you’re a fairy. The problem is that he has already found his mate he just doesn’t want to claim her. Meanwhile, there are trolls attacking the fairies in attempt to destroy them. I felt so bad for Keyn. The nightmare and the memories of his abuse was hard to read without tearing up. I really wanted him to find his happy ending. Trillian is having her own issues with a sick brother. Together they’re the world’s worst couple but it made for great entertainment. Trillian was really great. I liked her attitude and then her vulnerability when her brother gets worse. The push and pull between the two is fantastic. The sex was freaking fabulous! The author does not skimp on details so prepare for some serious heat. Fairy Unbroken is a wonderful tale of two people meant to be together but refusing to go down without a fight.

This is the third book in the A Fairy Novel series. Yes, I&#039;ve read them all. I recommend reading them in order so you can learn about this world from the beginning. This story begins with Keyn having his regular nightmare and re-living some truly horrible things from his childhood. He&#039;s a fairy, also a warrior. Oh yeah, he also hates humans because of what a few of them did to him back then. He wakes up screaming, sweating and crying so the first thing he does when he gets hold of himself is fly off to see his mate. His human mate. So instead of trying to meet her or anything normal like that, he kind of stalks her. The mate turns out to be Trillian. She&#039;s in Ireland with her older brother Cameron, who had been a US Marine until his illness. No one had a clue what was wrong with him. This includes his doctors, the hospitals he goes to for testing...and all the fun stuff. What the worst (or best?) part of all this is Trillian would do anything to save her brother. While he&#039;s off at a hospital getting tests, she and her little home are attacked by trolls. Yes, I did say trolls. Because of the attack, Keyn flies her off to the Fairy palace, for protection. Really. So, hopefully you all have at least read Fairy Flavor, the first book of this series. That is where we first meet King Carrick and his human mate Queen Brook. We also meet all the rest of the small band of fairies too. So our girl, Trillian, regardless of the fact all the men have wings does not believe in fairies and trolls and all the other paranormal, fictional stuff in children&#039;s fairy tales. She does not believe her angry looking stalker is her mate. These two are quite a pair. She manages to leave the kingdom to get home to call about her brother. The hospital&#039;s response fills her with great panic and she speeds off to pick him up. He&#039;s on the brink of death. Sigh. Again, nobody has a clue why. She gets him into her house and is interrupted by her angry stalker. Keyn is trying to get her to return to the palace and she refuses to leave her brother. So he gets permission, and fairy warrior Thame, to bring both siblings back. So, in the big scheme of things we (Trillian and us) know despite his terrible baggage, Keyn is not a bad fairy. Because they are working to begin Cameron&#039;s healing, she&#039;s willing to attempt a relationship with her damaged fairy. The trolls are attacking since they want the fairy&#039;s land. So, the fairy warriors head to battle and the women either cower or fight. The human women all fight. So, after battles, healing, stress and tears, Keyn manages to tell Trillian the whole story of what happened to him. More tears, mine and theirs. She realized during the last battle she loved him. She wants to be with him, if he&#039;ll let her. My biggest question is this, what happened to Cameron? Ms. Keraleigh has given us an intense story! Just because they are fairies, don&#039;t think they are the stereotypical, tiny kind. They aren&#039;t, and that makes her stories pretty awesome. She gives us fantastic tales with at the least romantic if not just plain smexy time. I already have Ménage a Fairy, the fourth book in this series!

I have loved this series so far, getting wrapped up in the fantasy of being accepted into the fairy realm as a mate, yup slight fantasy of mine as well. I enjoyed this latest chapter and adventure in the Anna&#039;s world of fairy, though I will admit I felt it ended a bit short. There was more emotion in this book and more, well everything, but I wanted more at the end. I usually do, but even more so this time. That is the only reason I didn&#039;t give this one a 5 star rating! I can&#039;t wait to read the next in this series. If you haven&#039;t read the first two in the Fairy series, you need to go back and gobble them up as well. A great read for when that special something is missing. Grab one of Anna&#039;s books, a glass of wine, and a comfy reading spot. You won&#039;t put it down once you start!