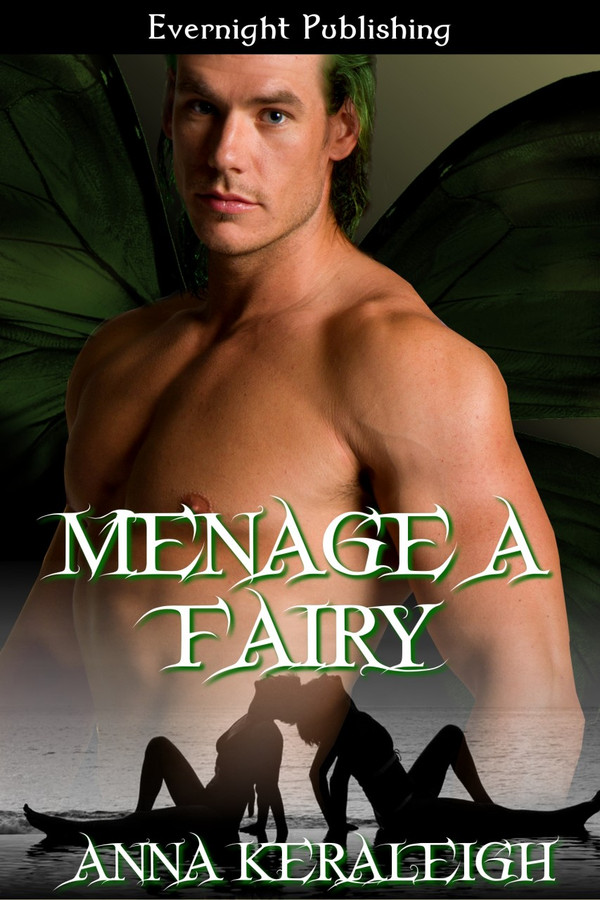 Annalise must choose between the woman she’s grown to love and the fairy who is her mate.

She has searched every inch of Ireland, looking for the green-haired fairy who saved her life as a child. When they finally meet it’s a dream come true until Wick kisses her and melts her heart.

Jayn is a man-hating lesbian who wants nothing to do with the fairy world. Too bad she has to work with Wick, the fairy who stole Annalise from her in order to survive. Down the Leprechaun hole they go and the only way out is to solve an ancient riddle. Together.

Wayward mates, troublesome leprechauns and on the verge of a war with the trolls—Wick is out of time. Just when hope seems within reach, a calamity strikes and one of the fairies will not survive...

The tunnel widened and then it opened to a massive chamber. “Wow.” That was all the speech Jayn was capable of. It was a waterfall. There was a big hole in the rock wall where water gushed. It cascaded nearly sixteen feet before splashing into a big pool. The sound was incredible. It seemed to echo in the chamber. A sandy shore hugged the water as it rippled over the small pebbles. The black sand led to red rock floor and a few dozen fireflies sat idly in the corner of the chamber. It was…magical. The water itself seemed to glow and the smell was like fresh rain in the summer.

Wick stepped forward into the chamber, taking her with him. He walked up the edge and let go of her hand.

Jayn watch as he smiled and knelt down. His hands dipped into the water and brought it cautiously to his mouth. He sipped slowly, then generously and leaned forward to get another handful. She could definitely use some water. Her mouth was parched and she was beginning to get a headache. Jayn stepped forward to join him but her eyes drifted. She caught sight of Wick’s thick powerful thighs. They were spread. The loincloth that covered him shifted higher as he went for more water. Jayn screamed at herself to look away but not a single muscle in her body would listen. She watched at the material slid higher and his rear peeked out. Wick’s round balls were tucked between his inner thighs. A few stray green hairs were spread across them. Jayn involuntarily licked her lips. The curves of his ass cheeks were now visible. They were pale white and looked hard to the touch. She was so used to Annalise’s small, soft rear that she suddenly wondered what it would be like to grab the hard orbs of his ass. Jayn hadn’t felt this desire for a man in so many years. The thoughts that were suddenly overwhelming her brain shocked her.

Jayn tried to drag her sight from his goods as fast as she could. The worst thing would be being caught ogling a cocky fairy’s equipment. By the lifted green brown and the slight upturn in his lips, she had a feeling it was too little too late. “Yes, thirsty,” she muttered.

“Were you checking out my ass?” Wick moved so he knelt on his knees and the loincloth once again covered him up.

“Just wondering if they were like kilts. You know, are the men naked underneath? It’s a big debate where I’m from.” It was kind of the truth.

“Nope.” She moved around him toward the water but he grabbed her arm and pulled her close. “Hey!” Jayn jerked away from him.

“You were checking out my ass. Just admit it.” His voice went lower. “See anything you like?”

“Unless you have wet lips between your legs, you are not my type,” she said with as much malice as she could gather in her voice.

“So you keep saying.” His grin was gone, his back was arched and he leaned into her personal space.

“Hello. I’m a lesbian!” she tried but he was so close. The musky smell of him and the way his thumb rubbed circles on her arm made her protest weak. “Damn it, Wick. Don’t make me kick your ass. Again.” Jayn gasped.

Wick gently placed his lips against hers. Every muscle in Jayn’s body tensed. Her brain seemed to shut down as the fairy she hated kissed her. The motions were sweet, romantic, and brought back memories of her first kiss with her high school boyfriend. Jayn glanced at his wings which fluttered behind his body and then at his beautiful eyes before she closed them. Wick’s lips parted hers and his tongue entered her mouth uninvited. He swiped at her tongue and their touch became more fluid. Jayn could hardly believe she was locking mouths with a man, a fairy. His hands were suddenly on her hips and he was pulling her toward him. His hard body pressed against her and she felt the evidence of his desire. The moment Wick’s cock pressed against her leg, her brain seemed to wake. Jayn pulled away, pushing him so their bodies stopped touching. The chamber was silent but for the waterfall and their panting lungs.

“Well, that was interesting,” Wick said with his cocky grin returning.

“Interesting?” Jayn balled her fists. “Don’t you ever do that again!”

“You were the one staring at my butt and you didn’t seem to be protesting when my tongue was in your mouth.”

Jayn punched him. Her fist landed square on his jaw and knocked his head sideways.

“You’re always hitting me!” he complained before grabbing her wrist and pulling her close. This kiss came out of nowhere. They seemed to be fighting with their mouths instead of their hands. Although his hands were busy. They roamed her back and slid down to cup her ass cheeks. Her half-hearted attempt to push him away only made her lose her balance and she leaned heavily into him. Jayn’s hand slithered into his green hair and tugged as their kiss turned into a frenzy of wet lips.

This is the fourth book in the A Fairy Novel series. Yes, I&#039;ve read them all. I recommend reading them in order so you can learn about this world from the beginning. This story begins with Annalise basically being saved from drowning by a green haired fairy. Yes, a fairy! Of course, no one believes her and this leads to her being taken for psychiatric evaluation. Then we go to our green haired fairy, Wick. He is one of several fairy warriors fighting the war against the trolls. There are only a few mated fairies, he not being one of them, so besides being lonely he sometimes doesn&#039;t want to be around the happy couples. Sigh. This brings us to an adult Annalise sailing the shores or Ireland looking for her fairy. Her partner in this quest is her lover Jayn, an ex New York cop. The two ladies are truly in love and while Jayn doesn&#039;t believe in fairies and the paranormal she does believe in Annalise. So, Annalise, on her daily hike to find a fairy falls and waits for rescue. Meanwhile Jayn is worried since Annalise is late and is hiking the woods calling out for her lover. Wick is walking the perimeter when he hears Jayn and finds out Annalise is missing. This leads to Wick kissing Annalise, Jayn becoming enraged at witnessing this and trolls sending a message to King Carrick saying they want peace now. Okay, even I am too cynical to believe that, but alright then. So, the Fairies are a little stressed from the peace offering they don&#039;t trust, from Queen Brook being very pregnant and because Annalise cannot decide between Jayn and Wick. Oy. Alright, it is unclear to me how old Annalise is at this point but I do know sheâ€™s young. At least she acts young. I thought it was very funny when Annalise was the one who was with Brook when her labor began. I almost expected Annalise to start quoting Prissy from Gone with the Wind about birthing babies when Brook goes into labor but I have the impression she&#039;s too young to have even have heard of the movie. Now, I must tell you all that I have been reading romance novels for at least twenty years and what makes them romantic for me is more than just the smexy time. The story has to have a happy ending! While Ms. Keraleigh has given us another good story, with twists as well as a shocking turn, in my opinion it doesn&#039;t have a happy ending. I was very upset and angry with her surprise and it was all I could do to not tear the story apart. It really is a great series. I loved the first story, Fairy Flavor, the most but this story just kind of took my enthusiasm away.

This is a continuation of the fairy series by Anna Keraleigh. This is all about a fairy man, Wick, and a lesbian, Jayn, going after the same woman, Annalise. There’s also a major war about to begin with the nasty trolls. The book was fabulous. I couldn’t put it down. From the hot sex to the explosive ending that had me on the edge of my seat. Yes, I got all misty eyed when a particular character died. He shall be missed! However, I liked that the author took a chance by killing off a beloved character. It made the story seem more real, more emotionally challenging rather than an average happy ending (Which there is for the three characters this story is about.) Does this mean Valen will be coming back into the mix? That man was hot! What about the baby princess? What about the prophecy from the first book? So many question I have and I&#039;m really excited to see how they get answered in the next book. The ending was so damn good! I really enjoyed this series. It has a lot of plot mixed with a hot sexy threesome. There is f/f action so if you’re not into that I suggest you skip those parts. Don’t miss this book though, really fabulous read. I liked the world building or destroying (hint, hint) and I’ve come to enjoy the relationship, as crazy as it is, between the fairy, the lesbian and Annalise. Very hot. Menage a Fairy is a wild, hot adventure with fairies, nakedness and explosion’s to keep you on the edge of your seat!