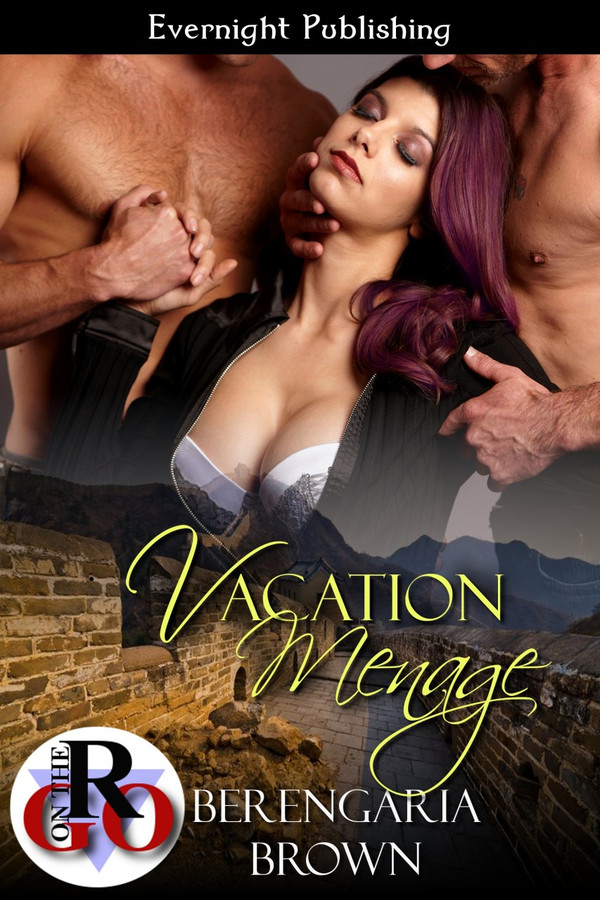 Eden’s ex constantly ridiculed her because of her size. Now she's a free woman and headed to China for her dream vacation. While waiting for her flight she meets two handsome men, only to lose sight of them as the plane boards.

Zeb and Bryce are best friends. When they meet Eden, both want her and hope she'll be interested in them, too. After a day of sightseeing the trio go back to the men's hotel room and Eden discovers a side of herself she's never before experienced.

Can this ever be more than a vacation romance?

No one paid any attention to Eden as she went up with the men to their room. Within seconds of the door closing, the men pounced on her and began peeling her clothes from her body.

“A bath first, I think,” Zeb said, as he disappeared into the bathroom to turn the water on, while Bryce rummaged in his luggage, emerging with a handful of condoms, a tube of lube, and a large, black butt plug.

She broke off, realising she’d never mentioned The Ratfink to the men.

“Anything you want to do is fine by me,” she replied.

“You didn’t actually answer the question,” Zeb said. “But I promise that when I fuck your ass, you’ll enjoy it very much. I’ll make sure of that.”

The look in his eyes made Eden feel hot, needy and breathless. She was ready to do anything they wanted.

The men laid her face-down on the bed and began playing, teasing her body everywhere. While one set of hands massaged her feet and legs, another ran up and down her spine, rubbing and pressing along the way, making her hotter and more needy.

Finally, a slippery finger pushed into her ass, twisting and turning, while smoothing cool gel around the hot walls of her rectum.

One mouth pressed sweet, sucking kisses along her arm and on the soft skin inside her elbow, then up to her shoulder, while the other mouth sucked and kissed around her lower spine as the finger in her ass became two, and then three.

Eden began to rock and moan, desperate for release by the time Zeb pressed the butt plug into her ass, then flipped her over as Bryce slid his latex-covered cock deep inside her pussy. Zeb moved beside her so his cock was poised at her mouth. Eagerly, Eden stretched forward to suck the head of Zeb’s cock, as Bryce pumped hard into her cunt.

Hands on her breasts tweaked her nipples, and another hand scraped a nail over her clit, as Eden’s orgasm burst over her in a tidal wave of feelings. She barely managed to keep control of her mouth to keep sucking Zeb. As her orgasm died down, she ran her tongue under the ridge of Zeb’s cock and gently scraped her teeth along the head.

Bryce thrust hard and deep inside her cunt and groaned, as Zeb whispered, “Hell, yes.”

Then both men climaxed.

The men moved off her but their hands continued to gently pat, stroke, and soothe her skin so she felt cherished as they all lay on the bed, recovering.

“Shit! The water.” Zeb bounced off the bed and raced into the bathroom. “Just in time,” he called out, as they climbed off the bed to follow him.