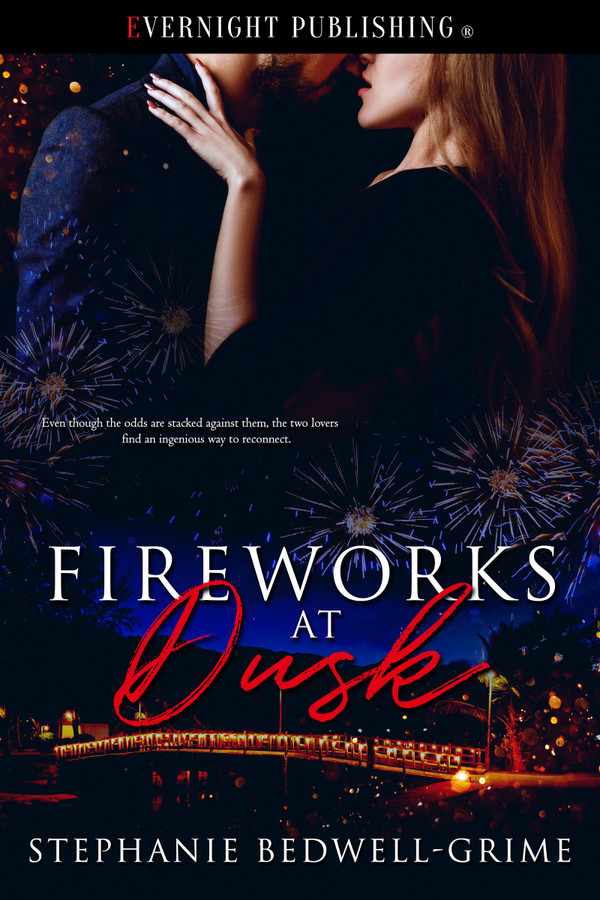 In a city divided by a deep river valley, one side is stricken with a deadly outbreak. In order to protect themselves, the citizens on the other side of the valley destroy the connecting bridges and sever all transportation and communications links.

Brielle lives on the western side of the city in the epicenter of the outbreak. Rayden is a native of the east side. On the eve of the outbreak, he’s on his way to see Brielle when the two sides of the city are separated. With little information getting out, and no way to contact her, he’s desperate to know if Brielle is safe.

Even though the odds are stacked against them, the two lovers find an ingenious way to reconnect.

It was truly late by the time she arrived on his doorstep. For a moment, she wondered if he’d still be awake to let her in. Luckily, another tenant was coming out the main door as she arrived. Grasping the door before it closed, she entered the building and took the stairs to his floor.

A couple of knocks later with no response and she was worrying that she’d made a big mistake. Rayden had gone to bed. He’d never hear her. She’d end up taking the night bus home.

She knocked again and tried not to wake the neighbors. The peephole darkened momentarily and then she heard the locks disengaging on the other side.

Rayden had cracked the door open and peered out, as if he couldn’t believe what he was seeing.

Brielle offered him a hesitant smile.

The smile he gave her back was like the sun coming out. He threw open the door.

“I did all that for you so you could stay inside and get some sleep.” He’d obviously been asleep himself. His hair stood out in all directions. He was wearing a pair of faded black sweats and nothing else.

She stepped into his embrace. “I know, but after that, I couldn’t sleep. I had to see you. I had to tell you I love you in person.”

“You came all this way.” She could hear the wonder in his voice.

“And you made the most romantic gesture ever.”

He tightened his arms around her and she reveled in his sleepy warmth.

“Are you taking off your jacket?” he asked after a minute.

Brielle pulled out of his arms long enough to toss her coat on a hook by the door and put her shoes on the mat.

“I have bubbly wine in the fridge,” Rayden offered. “Or we could just…”

Still entwined, they made their way down the narrow hall to his bedroom. He’d obviously heaved off the covers when he’d heard her knock at the door. Seeing his bedroom in such disarray, he broke away long enough to throw the comforter back on the bed. It didn’t change that the sheets beneath were tangled, but it did give the room a neater look. His gesture made her chuckle.

Rayden swept an arm toward the bed. Together, they moved to sit on the side.

She was sleepy now, the adrenaline she’d used getting across the city dissipating. Sleepy, but not ready to go to sleep just yet.

Rayden wrapped his arms around her. “We could just go to sleep, you know.”

She was grateful for the offer, but it wasn’t what she needed. Her mouth closed over his, showing him her true intentions.

“Or not,” he said when they surfaced.

Brielle is a young professional woman living on her own in a city. She has recently started a relationship with the love of her life. Rayden is Brielle’s boyfriend and lives on the other side of the river. He is determined to let her know that he loves her, even though they are separated. A terrible virus has suddenly separated the two halves of a large city. A bridge connects the two halves and only one half is affected by the epidemic. Brielle lives on one side of the river and Rayden on the other. Suddenly they are separated, and all communication between the two sides is severed. This is a compelling and engrossing story. The parallels to the current situation are obvious, though much more extreme. Brielle and Rayden’s story is told through a series of flashbacks and scenes from the present. The author does an excellent job of telling each character’s story and the contrast from the virus ridden side of the river and the healthy one is very stark. Brielle is in more than just quarantine, power and supplies are only sporadic and they have been cut off from communication with the outside world. Rayden is healthy and has resources, but is terribly worried about Brielle. There is quite a lot of story packed into just a few pages.

Brielle and Rayden had slowly but surely built a lovely relationship even though they lived on opposite sides of the city. When a strange virus strikes the entire city is thrown into chaos and communications are down along with the bridge that joins the two ends. Brielle and Rayden are separated – but their love for each other helps guide them to a new way to communicate and be together while they’re apart. Considering these current times I haven’t been reading too many of the “plague kills everyone” or “post-apocalypse” style of stories because it’s not really “paranormal” or “dystopian” fiction anymore rather than another day checking out our global news. The plot of this one, however, really captured my interest. I was relieved and really pleased to find it hopeful and sweet – which is I feel is totally what we all need right now – and I loved how Brielle and Rayden were both determined to reconnect and be together even when they were physically divided. I wasn’t too keen on the jumping around in the timeline – from the present back into the past of Rayden and Brielle starting their courtship, back and forth, but I admit I did enjoy seeing more of these two main characters interacting together and watching their story on how they fell in love and came to be together. I’m not sure the bouncing around will suit every readers tastes, but overall I felt the gain from getting more of an insight into Brielle and Rayden’s relationship was worth the headache of the jumping around. Readers looking for an intensely erotic story won’t find that here. While Brielle and Rayden are in a relationship their physical separation means there isn’t much sex really to speak of in the story – just one flashback scene. The story focuses more around the steaminess and emotional connection between them. I found this different perspective refreshing and quite enjoyed it, though I would understand readers wanting and expecting an explicit and sexy story might not be satisfied with this aspect to the story. I was nervous that the story mightn’t have a happy ending but I was delighted to be proven wrong. This story has a satisfying and very happy finish and I feel readers will be really pleased with this. Overall I thoroughly enjoyed this story even though it hit a bit close to home. I really feel readers can give this a chance and they shouldn’t find themselves disappointed.