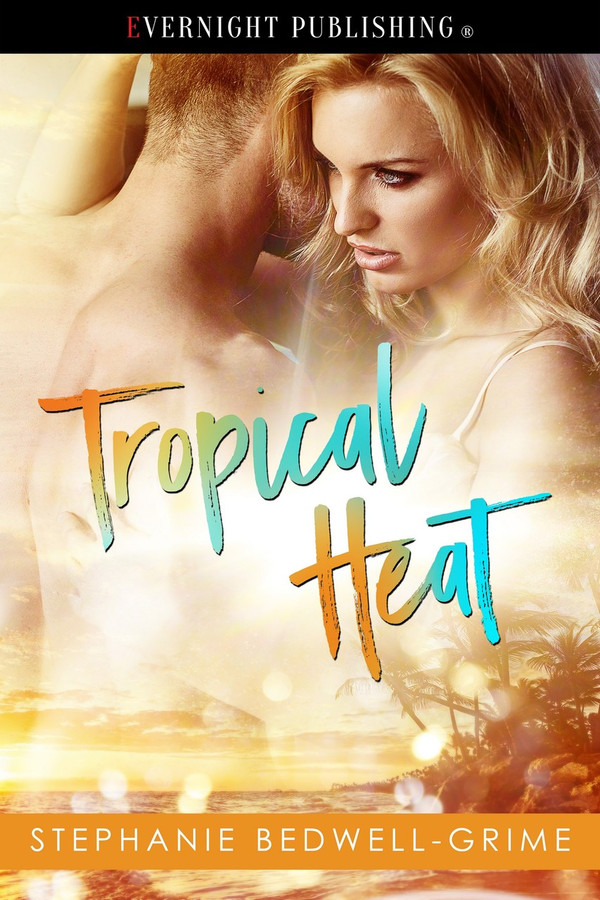 Sydney thinks she’s found the perfect solution to her stalled love life: a Singles Week at a tropical resort. The resort turns out to be everything Sydney had hoped for, except for the accommodations. Due to a hotel mix-up, she’s been assigned a male roommate, Jesse.

Jesse has come to the island to celebrate his buddy’s bachelor party. Problem is: his friend is marrying Jesse’s ex-fiancée.

Deciding there’s still a week of fun in the sun to be had, Sydney and Jesse agree to make the best of it. What neither of them is expecting is chemistry between them as hot as the weather outside.

Will Sydney and Jesse’s relationship survive or will it wither under the tropical sun?

The sun lay squashed against the horizon now, becoming redder and bathing everything in a rosy glow. Its warmth diminished slightly, the air becoming slightly chillier. Jesse drew her closer. She leaned into his warmth, letting his larger body block the cool air blowing in off the water. She took another sip of champagne. She lowered her glass, and when she glanced back up, his face was lit by the setting sun, giving him that burnished glow as well. He smiled before lowering his head to kiss her.

He’d had a sip of champagne as well. She could tell by the bubbles still dissipating on his tongue. He kissed her softly at first, a feather-light brush of his lips. Then the kiss deepened, becoming something more. Something yearning, something searching, as if he intended to discover all of her secrets in one kiss.

She kissed him back, intent on discovering his secrets as well. Their tongues tangled together, mingling with the bite of champagne. His warm mouth contrasted with the cool air, a rush of sensation more potent than the wine. She’d been kissed before, but never like this. It was as if he could put all his sensuality into one act. There wasn’t much else they could do here on the boat in front of the captain and crew, but that kiss promised so much more. Images of the two of them tangled in sweaty sheets raced through her mind.

A crew member surfaced to top off their champagne. He gave a short chuckle and disappeared with the bottle. They drew apart long enough to laugh.

Sydney looked back at the crew member’s departing back. “I think we’ve scandalized the crew.”

“Really, do you think people—”

The sun had sunk below the horizon, but the sky was still alight with crimson rays. The catamaran’s deck lay in shadow now, giving them a blanket of privacy.

“Anyway”—Jesse brushed her mouth again, teasing her lower lip—“it’s starting to get dark. They won’t be able to see anything.”

His mouth covered hers before she could object.

Their tongues tangled together. She ringed her arms around his neck, pulling him even closer together. She felt the warmth of his hand as it traveled up under her tank top until it met the lacy barrier of her bra. Not to be deterred, his long fingers slid beneath the material to brush her nipple. She moaned against his mouth and he pulled away long enough to give her a sly smile. As if he’d been caught doing something naughty and had no intention of stopping. His eyes gleamed in the darkness as he waited for her to say something, perhaps to say no. But she didn’t want to say no. She didn’t want him to stop. She glanced behind her, finding the deck empty. The boat still sailed. Nothing but ocean lay between them and the dying rays of the sun. No one to see. They couldn’t really do what she thought he intended for them to do here, could they?