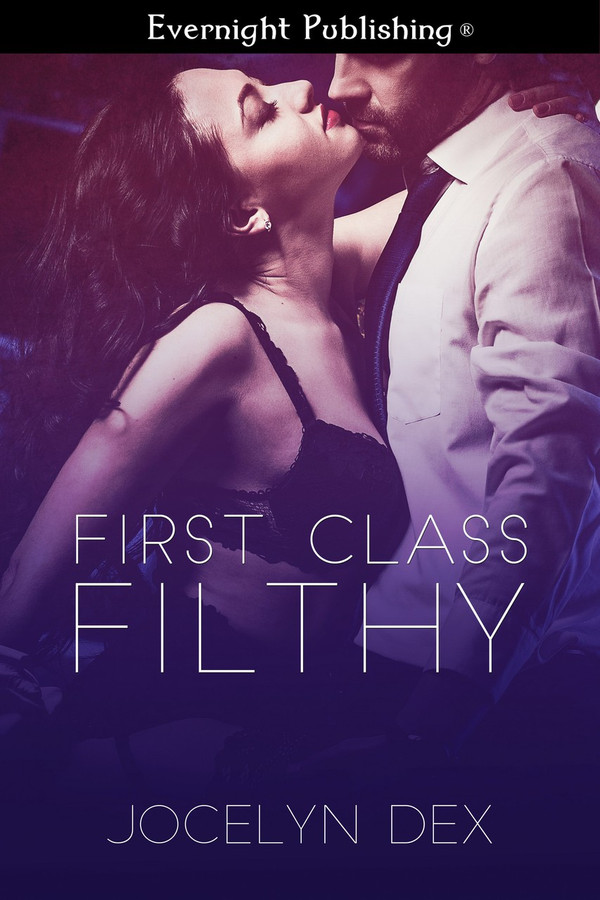 Shay is terrified to fly, but when Max, a sexy-as-sin man, sits next to her in first class, he provides a distraction that changes her outlook on flying and leaves her longing for more.

Back home, Shay is shocked to learn Max’s true identity and worries she’ll be fired for her brazen behavior. Instead, Max demands a meeting with her. His sexual dominance and dirty talk drive her to heights she’s never known, but when she begins feeling like a prostitute instead of a sexually progressive woman, she decides to put a stop to the sexcapades.

When Max turns on the charm, will Shay stand her ground or bend to his will?

“So what do you do, Shay?” As she was about to answer, he waved a finger in front of her. “No, wait. Let me guess.” He tapped the long, thick finger against those kissable lips. “Supemodel?”

Shay snorted. She couldn’t help it. Really? Anyone looking at her could tell she was no freaking supermodel. Her shoulder-length brown hair was boring. Her breasts were small, and her ass and thighs were out of proportion to the rest of her body. She was comfortable with herself, but supermodel she was not.

“Riiight,” she said, sarcasm dripping from the word.

He eyed her up and down again. “Looks right to me.” He tapped the finger against his lips again. “Sexy librarian?”

Well, she might not be a beauty queen, but he obviously liked what he saw, or he was one of those that flirted with anything that had a vagina. She’d prefer to go with the former, and her stomach flip-flopped at the knowledge. She laughed and said, “You’re not very good at this game.”

He shrugged. “Maybe not. Tell me.”

“I’m a receptionist. Not very exciting, but it pays the bills.”

“Sexy receptionist,” he corrected. “Where?”

Her heart fluttered at his praise. “Steel Solutions.”

He coughed, his eyes widening. “Really? I frequent Steel when in Houston. I’ve never seen you there. Which department?”

He frowned. “No wonder. I don’t get down there much. I’d think they’d want someone with your looks up front, greeting visitors.”

She couldn’t hold back the smile his statement induced if she’d tried. She shrugged and asked, “What’s your business at Steel?”

She sized him up as he’d done her. “Um…lawyer. Handsome lawyer.”

He scrunched up his face. “I can work with the handsome part. But not a lawyer, no.”

The plane bounced, lurched, dropped. Shay clutched the seat. Max reached over and laid his strong hand on her thigh. The desire that burned inside her for the stranger sitting next to her almost made her forget her anxiety. Almost.

“Just a little turbulence. I have you,” he said, giving her thigh a totally inappropriate but moisture-inducing squeeze.

How was it that a look, a simple touch from him had her mind racing with all sorts of carnal thoughts? She shivered from desire and totally forgot what they’d been talking about. “Th-thanks,” she said breathlessly.

She nodded, figuring it better he think her cold than he know how much he affected her. He removed his suit jacket and laid it over her thighs, tucking it around her waist. Such a gentleman. Well, gentleman might be a stretch.

The captain’s voice came over the intercom announcing more turbulence ahead. Just as he clicked off, Shay gasped as the plane bounced and shuddered again. God, please no more, but God wasn’t listening, because the plane continued jerking around in the air. Even the flight attendants were strapped into their seats, a look of forced calm on their faces.

“You need a distraction,” Max said as he leaned closer to her.

Shay gave him a doubtful look. “Not much could distract me from imminent death.”

He chuckled. “Let’s put that to the test.”

After switching off the overhead light, his hand snaked under the jacket covering her lap and caressed her thigh seductively. The guy was unbelievable. Where the hell did he get that kind of confidence? She should push him away, slap him, or something, but it felt good. Too good, and she wanted him baaad. If they weren’t on a plane, she’d jump him in a second.

His strong hand alternated between kneading and light stroking, her body melting under his touch. Her mind responded, anxiety drifting away. Her body responded, heating, yearning.

His caresses intensified, crawling higher up her leg. Her heart pounded, her pussy going wet, burning for more. The situation was crazy, and she vaguely wondered if she was dreaming.

She opened her mouth to speak, but he said, “Lean back. Close your eyes and relax. Enjoy.”

She gazed at him incredulously for a long moment, her mind warring with her body as to what to do. Eventually, her body won and she obeyed.

“Good girl,” he said as he tugged the hem of her dress up.

Loved this hot, short story. I read it in one sitting, which is just as well, because the author had me hooked from the first page. The heroine is very likeable and the hero... *swoons* Dominant, dirty talking, yet also considerate and downright yummy. Well worth a read, just make sure you have a glass of iced water to hand. You&#039;re going to need it ;-)

The First Moon by Sam Crescent