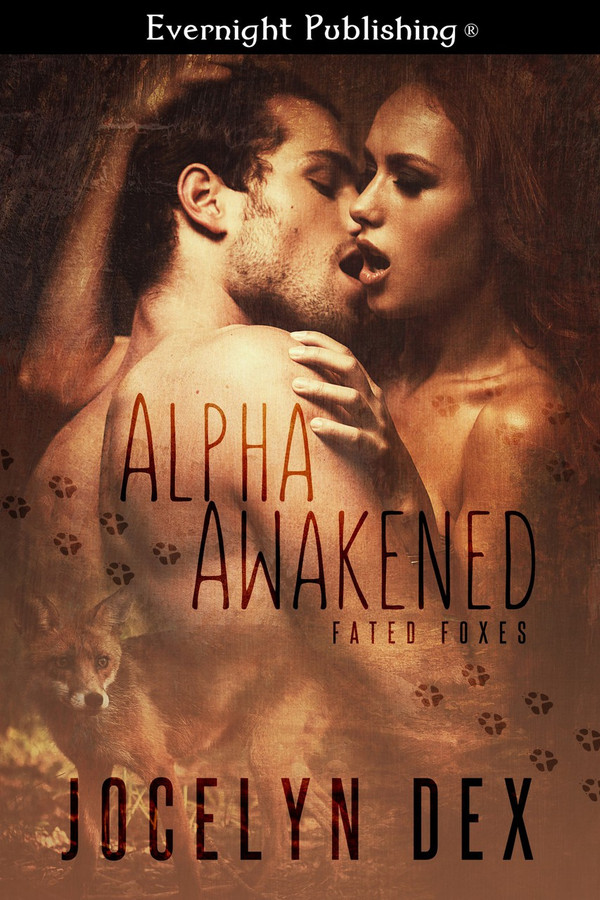 Hale, a fox shifter, hates everyone and everything—especially himself. He’s an angry, bitter, mentally unstable drunk who blames himself for his mate’s death. Not being able to tolerate being in the presence of female fox shifters, uncontrollable rage erupts when he meets Hope, and he’s torn between killing her and kissing her.

Hope knows she has to have Hale the second he steps inside her shop. The fox inside her comes to life and demands to be claimed. Even though Hale is vulgar, volatile, and threatens her at every turn, she wants to ease his pain, bring joy back into his life, and make him hers.

Can Hope break through Hale’s walls and awaken the alpha within, or will Hale finally scare her away for good?

He gulped, his gut clenching, his entire body going rigid as he spotted a female on tiptoes, reaching up to place a candle on the top tier of the display. Her long, red hair cascaded to the small of her back. She wore light green cropped pants that hugged the most luscious ass he’d ever seen. He grunted when his dick twitched and he realized he was semi-hard. He hadn’t been hard for a female since…

“Oh!” She spun around. “I didn’t know anyone had walked in.”

Her face. Oh fuck, her perfect face. Her eyes were the color of a golden sunrise, her lips a perfect, pink cupid’s bow.

When he only stared, she smiled uncertainly. “Um, we’re not officially open for business yet, but if you smell something you like—”

He normally didn’t worry about what anyone thought of him, but standing in front of her, like an idiot unable to find words, was somehow unacceptable. He pointed to the candle burning on the counter, the fragrance that had drawn him in.

Her gaze followed his finger. “Oh, that’s my favorite. It’s a combination of jasmine, lavender, and rose. It’s my special blend. Great for relieving stress, grief, anger, depression, and even if you don’t believe in any of that stuff, it just plain smells wonderful.”

No, he’d have never believed it until now. He should turn around and leave. Why did he keep standing there? He didn’t deserve any relief, no matter how small. And he wasn’t exactly a fancy candle guy.

She walked behind the counter and pulled out a small gold-colored bag. “Tell you what. Since you’re my first walk-in,” she said and hurried over to the wall of candles, bent over at the waist, and he thought he’d die from the delectable sight. “Take this. Sample size.”

She dropped the small candle into the bag and walked it over to him. “Oh. You’re hurt,” she said and gently grasped his bloodied hand.

His skin prickled, hair standing on end. Her scent. The candle fragrance had overpowered it, but with her standing so close, touching him, it was unmistakable. She was a fucking female fox. A snarl escaped him as he jerked away from her. In her obvious surprise, she dropped the bag and the glass container crashed on the hardwood floor.

“What happened?” His sister, Sylvie, popped out from the back room. “Hale? What the hell are you doing here?”

His body shook, rage at being in the presence of a female fox filling his head with violent thoughts. Why should she live when his Grace couldn’t? Couldn’t save her.

“Oh shit,” his sister said as she ran up and punched him hard in the gut.

Air whooshed out of his lungs. He leaned over, hands on knees, trying to pull in some air. When he straightened up, he glowered at Sylvie, but he knew why she’d done it.

“Come on,” she said as she locked her arm with his and pulled him out the door and to his truck. “I was going to warn you about her. Didn’t think there was a rush considering you hardly ever show your face around here.”

He scrubbed a hand through his still damp hair. “Fuck me.”

He felt a hint of a smile tugging at his lips. His sister was the only female fox he could tolerate being around, and she was the only one who’d pulled so much as a half smirk out of him in eight years.

“And what the hell were you doing in there anyway?” she asked. “Not really your kind of store.”

She smirked. “How manly of you.”

I loved this story between Hale and Hope. He was a lost and lonely soul after his mate passed 8 years prior. Hope brought love and light back into him. I also loved Sylvie, I cannot wait to read about her.

I received Alpha Awakened as a review copy. The gifting did not determine the review/rating, which reflects my honest opinion. A really deep story line, focused on the grief of a fox shifter who lost his mate eight years ago. The guilt anger, drinking, and even the weight loss made Hale all the more real in his sense of loss... truly heartbreaking. Hope was just the perfect foil for the grouchy fox, her optimism and need to help him work through his mourning was an unwanted, but sorely needed balm to his pain. Some of the scenes stretched the bounds of belief, but this is paranormal romance, after all-- so sit back and enjoy the read.

My first story from Jocelyn Dex and it is not going to be my last. Hope is feisty and quirky and defintely interested in Hale, who has withdrawn from life due to his wife&#039;s death. She does everything to get him involved back in life. This is a story of &quot;against all odds&quot; - overcoming grief, anger and guilt. Looking forward to reading more about this small town. Voluntarily reviewed

I was given an opportunity to read the work of Jocelyn Dex . She is a new author to me yet the genre is not . It&#039;s one of my favorites too read I believe she did it justice. The story is not long but is full of enough information for those whom , have a good imagary can build the book around them. A heartbreaking tale of which one of the main is slowly killing themselves ; till the twist in the web of fate has sent them . A strong determined mate . I&#039;m sorry I don&#039;t do spoilers Read The BOOK. It&#039;s a quick one as I stated before but hmm the sex scenes are worth it.

I was given a free copy in exchange for an honest review. It’s sort of twisted for “insta-love” since he is so full of self-loathing that she has to do all the work of pursuing him. Hale is a sad bastard, and Hope is so perky &amp; determined. This is the kind of love story that works well with &quot;were-mating&quot; because Hope is able to &quot;know&quot; this guy, who is trying to drink himself to death, is worth pursuing despite all evidence to the contrary. If they were humans you&#039;d feel sorry for her as she relentlessly pursues this guy desperately in need of therapy, but since they have intuitive were-fox knowledge --we know that she is sensing the &quot;heart of gold&quot; he has buried so deep.

This is my honest review of an ARC of Alpha Awakened. I was not sure what to expect by the tag of this story but it was a wonderful read of love, acceptance, and overcoming the pain of a haunted and broken heart. Hale is a fox shifter who, 8 years ago, lost his mate Grace. He crawled into a bottle and became violent towards any and all female foxes - why should they live when his Grace died. His pain, anger, dispair at not being able to save her drives him to push everyone away from him. The only person still brave enough to endure his wrath, his sister Sylvie. Sylvie and new friend Hope, are working at opening a candle and Aromatherapy shop in town when Hale comes face to face with the red headed beauty. Much to his confusion and dismay, he realizes she&#039;s a fox as well. Somehow he is drawn to her though...despite trying to keep his distance, Hope keeps invading his walls. Sending snacks, breakfast, lunches, dinner...the woman doesn&#039;t have a regard for her safety. Hope is determined to help Hale, to heal his broken heart and bring the man back from the brink of dispair. With her friend Sylvie&#039;s help she slowly and patiently wears Hale down a little at a time. The insta love element was present, but so was the struggle of trying to love after such a horrific event on Hale&#039;s part, and acceptance on Hope&#039;s.

Hale, a fox shifter, raced back and forth continuously, but the painful thoughts of his mate’s death, killed brutally by hunters, would not stop. He hadn’t been able to save her and it was killing him inside. After 8 years of constant pain, he knew he was almost crazy. The grief would never end. Sylvie was helping Hope get set up in her new healing aromatherapy candle shop. Hope needed to look for a place to stay and Sylvie offered her brother’s cabin since he had not used it in years. She finally agreed to stay there until she found her own place. Hale woke hungry, lying in the dirt of the front yard, and had no food to eat, so he drove into town. In the store, he glared at a mated couple. He especially hated female foxes because they reminded him of his terrible loss. He left the store and smelled a calming fragrance that drew him in to a new shop. And he saw a redhead who took his breath away – until he caught her fox scent and went into a rage. This was a good story of overcoming intense pain and loss. Hope’s loving heart, strength and courage, made her reach out to try to heal the hurting man. He had been suffering for a long, long time. Would she be able to get through to him? I definitely recommend this book. The story line is well developed and will take the reader along on a journey of possibilities.