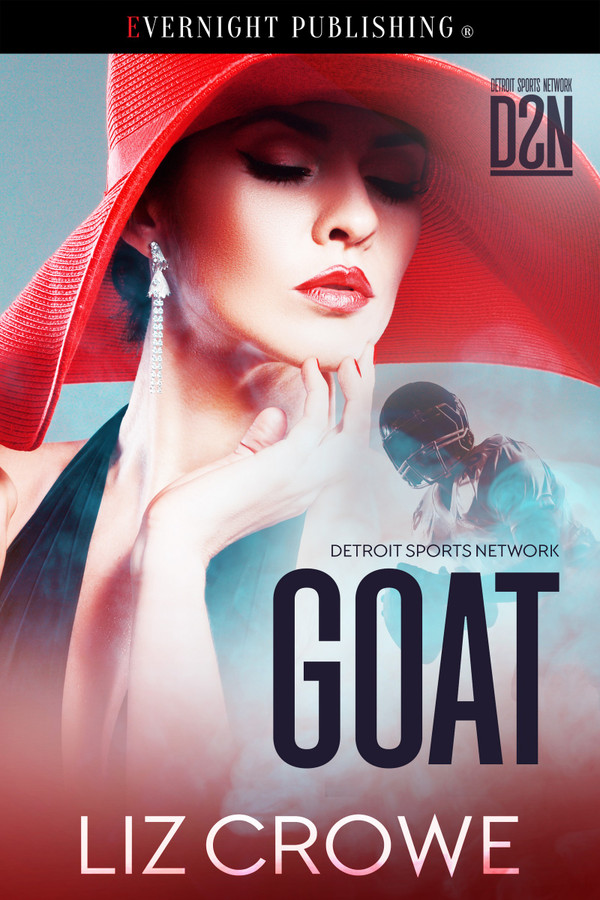 Lust and love don’t stop after forty—just ask the G.O.A.T.

When lives are changed and plans are altered after one seriously hot weekend at a premiere horse racing event, Roz and Sean have to face the fact of the matter—that their first meeting may have been pure coincidence but now it’s pure heat.

Sean got up, needing to move around, to dispel nervous energy.

“Oh, sit down, for heaven’s sake.” She smacked the ottoman in front of her. He took it as an invitation but reminded himself that he had to go slow, to let her lead. He sat, keeping his distance. But still so close he could smell her, her skin, her lotion, her very essence. It was intoxicating. He clenched his jaw against it. “You are so … cute.” She bent one knee and pressed the toe of her other foot into his thigh.

Okay, so this was torture. Sean channeled his inner big boy and smiled at her, got up, and sat on the couch. He needed space. “I am cute,” he said, sipping his water. “You’re beautiful. But surely you know that.”

She snorted and looked up at the ceiling. “You really do know how to bring out the worst in a girl, don’t you, mister man?”

She glared at him long enough to make him uncomfortable. “I’ve had way too much to drink. Again.” She got up, swaying a bit before she righted herself and headed for the bathroom. Sean waited, taking deep, calming breaths. She returned, looking flushed, her hair tumbling in soft curls around her face. Sean had to clench his fists tight enough for it to hurt to stop himself from grabbing her, dragging her onto the couch, showing her how a real man treated a woman as magnificent as her.

She walked up to where he was sitting, slouched down into the too-soft leather, and sat in front of him on the ottoman. “I like you,” she said, putting her hands on his knees. “I like you a lot. But I’m not … I mean, we should be friends. We’d be really great friends.”

He took her hands and pulled, gently, so she rose and shifted forward, ending up on his lap. Once there, she curled into him, knees up, arms around his neck. “I would love to be your friend,” he said, stroking her hair. “But I’d also like to be more.”

She was shaking all over, which made him doubt himself and this whole damn scene. Closing his eyes, he pressed his nose into her hair, sucking in deep breaths of her. “I want to be more for you, Roz. So much more.”

“Tell you what,” he said, keeping his arms around her, holding her, like he sensed she wanted him to. “Let’s eat, watch a mindless movie, get a good night’s sleep, and go to a horse race tomorrow. I hear there is one. And it’s kind of a big deal.”

She nodded. He held on to her a little longer, hoping she wouldn’t get up anytime soon but knowing this was the extent of things for now. Which was fine with him. Going slow was his superpower. All the better to enjoy the final result, which, he told himself, would be a mind-bender for both of them. He grinned and pressed his lips to her temple, keeping it soft, non-committal.

The speed at which she flipped around, straddled him, and had her lips locked on his left him paralyzed with shock for a few seconds—but only a few. He met her halfway after the initial surprise wore off. Their lips smashed together, teeth clicked in an inexperienced way. Her full breasts mashed against his chest left him breathless in a way that should embarrass him but didn’t. The whole thing was surreal. He wasn’t sure where to put his hands. Her desperation was palpable, he could almost taste it.

As soon as he identified it as that—an attempt to prove to him that she could do “this,” whatever “this” was—he broke the kiss. “Hold on a second,” he said.

He was struck dumb for a moment, admitting that it was very much what he wanted. And that she was so damn stunning right then, lips full, face flushed, curls framing her face. He took a deep breath and put his hand alongside her cheek. She clutched it, and that desperate aura slowly began to fade. “Breathe,” he said. “Just take a minute and breathe.”

She blinked fast, then sucked in a breath and exhaled, never taking her gaze from his. “You must think I’m some kind of a…”

“Fascinating woman who worked hard to help her husband become successful, but was denied the most basic of spousal privileges—that of being told you’re perfect and beautiful multiple times a day. And being made love to in a way that you deserve, also multiple times a day.”

She made a sound of disbelief and raised an eyebrow at him.

He grinned back. “Well, you know, there was a time when I could’ve done that. And while those days are behind me, I make up for quantity by ensuring top quality, if you know what I mean.” He was spellbound by her, unable to take his gaze off her even as his body was painfully ready to scoop her up and take her into a bedroom, or this couch, or the floor and prove his qualifications. Although he knew it was soon. He shifted underneath her, trying to get comfortable but not wanting her to remove the lovely warmth of her body from his.

“You’re a charmer, I’ll give you that.” She got to her feet, keeping her hands on his shoulders, which put her boobs at his eye level, which made everything worse and better at the same time. He gave himself a mental pat on the back for keeping his hands off them, took her hands, pushed her up and away from him.