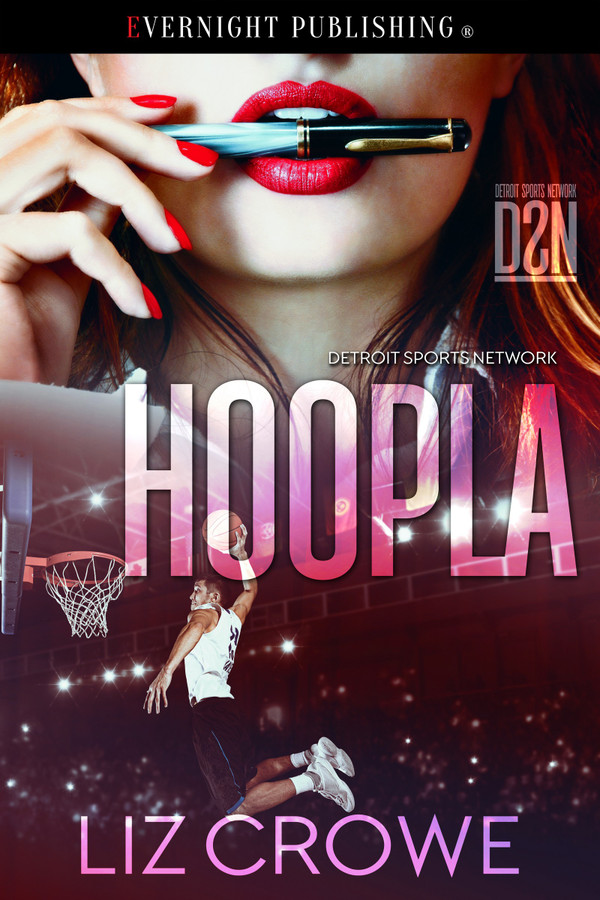 LeeAnn is living her best life. She’s got her dream job as VP of Production at DSN, a solid friend group, her own fancy car, and a great condo.

But when she steps in to interview Detroit’s hot new basketball sensation, she’s shocked to realize that her carefully curated world could stand some serious improvement.

Jax Hoople is a total unicorn. He’s talented, hot AF, but also sweet and sincere, plus he loves to cook for her. What is a woman to do—especially when he’s determined to be a lot more than a boy toy.

Jax sighed and closed his eyes, willing his body down off the ledge. Or at least willing it to stop producing so much sweat. He felt like a high school kid about to pick up his prom date, carnation in hand, condoms at the ready tucked into his wallet.

“Hey, you coming in here or what?”

The sound of her voice, with its sexy, soft Southern drawl, forced him away from the wall while his body disobeyed his direct, mental orders to calm down. He swiped his hand across his forehead, muttering under his breath at the still-damp sensation. He was already beginning to absorb and respond to the beating he’d taken on the floor above their heads. He wished he could run back to the locker room and not face…

He must look like the world’s biggest fool, standing here speechless, staring at the woman in front of him. The drop-dead, drop-everything gorgeous woman towered in her spiky shoes but must be tall without them, he figured as he made his way toward her, smile fixed in place. She had one hand on her hip and was eyeballing him like he was week-old roadkill. His long-ingrained and well-trained sense of chivalry kicked in and he hustled faster, holding a chair out for her. She looked at it, then up at him, and took a seat at the table.

“LeeAnn,” she snapped while fiddling with her phone.

She looked up at him. “Just LeeAnn,” she said before putting the phone down on the table between them. “No reason to be sorry.”

He watched as she took a long breath, shut her eyes for a split second, then pulled her hair back and fastened it with something. He wanted to ask her to take it out, because the thick auburn-colored curtain made his heart beat fast and his skin prickle.

Stop acting like you’ve never seen a beautiful woman before, he berated himself and cleared his throat.

“So, Jax,” she said, propping her elbows on the table. Which was handy so he could see for himself that she wasn’t wearing any wedding ring. “Welcome to Detroit.”

He chuckled and ran a hand around the back of his neck. His abused body was starting to sing out from various points, reminding him that he should’ve spent more time in the ice bath.

“Thanks,” he said, alarmed when the word came out with a squeak, like a cartoon squirrel or something. He ahemed a few times as his face got hot and sweat dripped down his back under his dress shirt. She waited, her face neutral, the only clue to her amusement in her snapping green eyes.

“I hear that you got put through your paces up there,” she said, pointing upward, indicating the gym.

He nodded, swiped the back of his neck again, then pressed his palms onto the top of his thighs which were covered in wool trousers that were making him sweat even more.

Get a hold of yourself, man. Sometime before you convince this lovely woman that you’re an inept, too-young-to-be-so-famous idiot.

She glanced at her phone again. He swallowed hard, wishing Mason were here to handle this for him. She’d told him that she’d only given permission to a couple of news outlets to talk with him this early. One of them was “something hot and cool at the same time,” she’d said in her strange way.

He frowned, realizing this was that outlet, represented by the lovely LeeAnn. “Tell me about DSN,” he said, proud of himself for recalling the name of the place. “All women? That’s cool.” He blushed again but kept his gaze on hers, determined to overcome his sudden need to further prove his dorkiness.

She sighed and tilted her head to one side. A small line appeared between her eyes, and it took everything he had not to leap across the table the smooth it out with his fingertip. “I mean, if you don’t mind,” he amended, worried that he’d made her angry.

“I don’t mind,” she said, touching the phone screen to stop recording. She leaned back in her chair, which caused her white blouse under the severe black blazer to shift and allow him a breathtaking view of the top of one breast. He shook his head, partly to clear it, partly to give himself a mental slap across the face when he realized she had lovely, large breasts to go with her full, sexy hips.