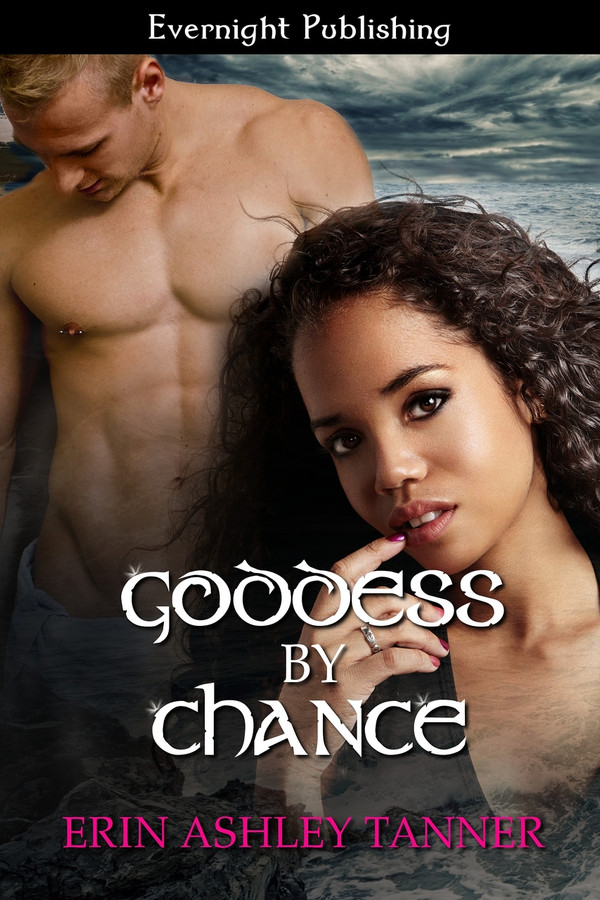 Arienne Marcos is a librarian with a secret. She has superhuman strength, a genius level IQ, and a goddess mother who is never satisfied. When Arienne lands on the radar of a god determined to use her for revenge, she has no idea what she is in for.

In time, Arienne will discover that her new lover harbors secrets of his own, secrets that could be deadly. Along the way she will find herself caught in the center of an eons old grudge between gods with a thirst for revenge. Arienne is a … Goddess by Chance.

Triton’s eyes opened in the darkness as a soft hand wrapped around his cock. He didn’t move as Arienne continued to fondle him in the dark. Her innocent fascination with the part of him he was so proud of made him bite back a chuckle. As her thumb rubbed over the head, he couldn’t help the way his breath hissed through his teeth. Her hand left him immediately.

“Arienne,” he said in a soft tone.

She remained silent. His hand moved to lie between her breasts where he could feel the frantic pace of her heart beating.

“You know you can tell me anything. Just say it.”

“I want to make love again.”

In the dark, Triton smiled. He shifted her in his arms until her head was on the pillow next to him. Even in the dark, he could see the expectant look on her face.

She kissed him then, her lips soft and eager against his, and he pulled her close, wrapping his arms around her. Arienne’s erect nipples brushed against his chest and he grew harder. Her tongue slipped inside his mouth, making him groan. The sweetness of her kisses was nearly enough to undo him. Easing Arienne onto her back as her kisses became feverish, his hand reached between her legs where the evidence of her readiness couldn’t be denied.

Nudging her legs apart, he slowly he thrust inside of her and her tight, wet channel gripped him like a vise, stroking him. His hips pumped into hers at a languid pace, enjoying the velvety softness of her. She moaned against his mouth before her tongue slipped to tango with his. Every slide into the welcoming warmth of her body made him pulse with increased desire.

Arienne Marcos is a demigod who did not meet her mother Athena until she was sixteen years old. Her father, Raymond took care of Arienne all her life. Athena has earned the reputation for her virginity and has made several enemies. However, when it is no longer a secret she has a daughter, Arienne becomes vulnerable to a plot for revenge. Triton partners up with his ex-wife Cerceis to infiltrate Arienne’s life to seek revenge on Athena. This is my first time reading a book by Erin Ashley Tanner and all I can say is that I am well pleased. I enjoyed Arienne’s character the most. She showed both strength and kindness. While she should have been cowering, she always stood with bravery. The plot showed originality and depth while building up to a pleasant romance. I liked how several of the characters with sordid traits find redemption. The fantasy and paranormal elements added a touch of magic to the story and assisted in enchanting me.

She did it again!! Another keeper for me! The characters are strong and the flow is wonderful. I read book 1 and 2 this weekend. I can&#039;t wait for the third installment

LOVE Erin Ashley Tanner&#039;s twist on Greek Mythology! Triton is deliciously sexy, Arienne is vulnerable but strong, and they are explosive together. I loved the first book, loved this book, and I can&#039;t wait for the next installment of the Demi-God Daughters Series.

Book 2 of this series introduces us to the daughter of Athena, goddess of wisdom and purity. Arienne, her daughter, is very close to her mortal father, but loves/hates her mother. She becomes a pawn to get revenge against Athena for a past indiscretion. I am loving this unique spin on Greek mythology. The author makes each god and goddess very human and fallible. It does help to read the first book in the series as there are many changes on Mt. Olympus.

The Fixer by Erin M. Leaf