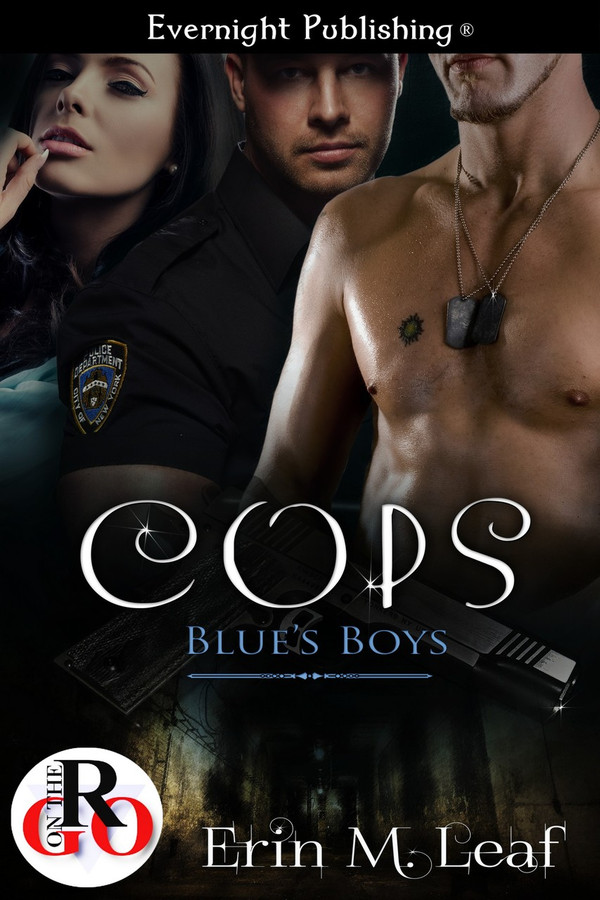 Blue is falling for her two new boyfriends, but they’re having trouble finding time to be together. Being a thief is crazy. And a cop’s work is never done. When you don’t have time to date, you steal any kind of alone time that you can. So what if Liam and Matt are tied up in the middle of a murder investigation?

Matt and Liam never expected to find themselves bound together in a basement. When Blue stumbles over them, she offers them something much more risky than freedom: herself. Because she’s not a saint. She’s a very, very naughty thief, and when her boys neglect her, they must pay her price if they want to win her heart.

“Here are your drinks,” Matt said, coming up behind them.

Blue glanced at him. His indigo shirt highlighted the intense blue of his eyes. His jeans were worn soft at the edges. Her fingers twitched. She wanted to run her hands all over him. “Thanks,” she said, taking the wine glass he offered. She sipped, then made a face. “What is this?”

He shrugged. “Seltzer with lemon.”

“Ugh, you’re trying to poison me,” she complained, smiling crookedly so he would know she wasn’t really upset.

“Can’t have you getting tipsy,” he said, leaning on the railing near the corner of the room. “You’re our camouflage.”

She snorted. “You still look like a cop. Standing next to me isn’t going to change that.”

He mock frowned at her. “Bite your tongue. We’re in disguise.” He waved an arm out, indicating their position. “We’re in the corner of the balcony, in the dark. No one will even see us here.”

“I’d rather bite your tongue,” she retorted. He had a point, though. The way the balcony was angled, they were in a semi-private alcove formed of two walls and the front railing. No one on this level would be able to see them.

He grinned. “That can be arranged.”

Blue turned and looked around the club’s dance floor. “The guy in the light suit?”

Liam nodded. “That’s the one.”

“He’s staring at us.” Even from here, she could tell that the man knew they didn’t belong in his club. A trickle of foreboding slid down her spine. Suddenly, Matt grabbed her and pressed her against his body. She opened her mouth, but before she could protest his manhandling, he kissed her. Whoa, she thought, when he slipped his hands down to her ass. Heat burst through her as she grabbed onto his arms. Zero to sixty in one and half seconds.

Matt slowly released her lips. Blue stared at him. His eyes had gone dark. Sexy, her thought, dazed.

“Kiss her,” Matt told his partner, moving his mouth down to her collarbone. He nibbled on her skin. Blue struggled to control her breathing, but his mouth pushed her arousal through the roof.

“What? While you’re still making out with her?” Liam sounded shocked. “We’re in public here.”

“Kiss her,” Matt ordered his partner. “Cops don’t do public indecency. No one will believe we’re here to work.”

“Jesus,” Liam muttered, but then he moved closer.

Blue turned slightly in Matt’s arms. For some reason, the thought of necking with them both, in full view of all the other people in the club, had her pussy tingling. She smiled at Liam and held out her hand.

He took her fingers and kissed them one by one while Matt wound his arms around her waist. Her dress was thin enough for the heat of his arms to radiate through the soft fabric. She tottered in her heels, but his body steadied her.

“Come on, Liam,” he muttered, hiding his lips in Blue’s hair. She licked her lips. Matt’s erection nudged her lower back. Clearly he wasn’t as shy as his partner.

Blue clung to him, all thoughts of the club forgotten. He and Matt pressed against her, surrounding her with their strength. For the first time in her life, she felt as though she could let go and trust in someone else to take care of her. The strangeness of that thought had her pulling back from him. She never let anyone take care of her. Ever. You’re falling for these cops way too fast, she told herself.

Liam didn’t seem to mind her leaning away. Instead of following her lips, he sucked a kiss into her neck while Matt held her up.

“Is he still looking at us?” she asked, trying to wrench her brain into gear.

“Johnson. Your mark,” she said, looking down into the club. She couldn’t see anything except flashing lights. What’s wrong with me? she wondered as her heart tripped against her ribs. Matt slid a hand between her legs and she cried out. His fingers knew exactly where to go and her silk panties didn’t do a damn thing to hide exactly how aroused she was. He murmured something into her nape, but she couldn’t understand what he said. Heat shot through her bones. “God,” she said thickly. She wouldn’t protest if he took her right now, she was that hot for them.

“I don’t see him,” Liam told her, not moving back an inch. He didn’t seem to realize he was pressing his front against Matt’s arm. “And we don’t call them marks. He’s a suspect in a murder investigation.”

Blue bit her lip and tipped her head back. “Matt.”

“Maybe we should go downstairs.”

“Fuck,” Liam said, pressing closer. His erection slotted up against her hip. “I don’t know if I can walk at this point.”

She laughed under her breath. “Yeah, me neither.”

Matt dropped his forehead down onto her shoulder. “Sorry. I guess I got a little carried away.” His hand was still against her mound.

“Don’t apologize,” she breathed, running her hands through his hair.

“What do you want me to do, then?” he murmured.

She looked around. No one was paying any attention to them in this back corner. “Undo Liam’s pants,” she whispered.

He sucked in a harsh breath. “Do you realize what you’re asking?”

Liam had gone completely still. “Blue, this is crazy,” he muttered.

She noticed he didn’t move away.

“You can say no,” she told him as Matt slid his free hand up her hip.

He laughed under his breath. “Yeah, that’s not going to happen.” He hissed when Matt’s fingers undid his button.

GAAH! Why isn&#039;t this delicious book longer!?! When first we met thief Blue and cops Matt and Liam, the three were gettin&#039; hot and heavy in a closet after they all happened to break into the same pawn shop at the same time. For different reasons, natch. Now, Blue&#039;s back at it again, and so are her boys...the hint of attraction that the men experienced with each other leaving them all dazed and wanting more. But between Blue&#039;s ex and a nasty murder suspect, the thief and the cops will have to work together to make it out alive. COPS is the second book in the Blue&#039;s Boys series and it was just as hot as the first one! I love the juxtaposition of a couple of sexy cops hooked up with a thief, even if her particular brand of thievery is kinda sorta not so terrible. The real star of this show is the WOAH BABY sex, like seriously incredibly erotic and beyond yummy! First of all, I adore that as 30 and 40 somethings, they all knew what they wanted and didn&#039;t mind being playful and experimenting. Between Blue&#039;s bound and blindfolded boys to Matt and Liam&#039;s hesitant but heated hand jobs, every erotic word was decadent and so soooo good. I adore Ms. Leaf&#039;s writing, and COPS was a hot ass follow up to Thief. I can&#039;t wait for Beloved, the next story in this series. Bottom Line: Pick up this series ASAP if you need a down and dirty quickie and are a fan of tentative yet tenacious MMF action! - See more at: http://erotic.theromancereviews.com/viewbooksreview.php?bookid=16133#sthash.KHSjBHGp.dpuf

In Cops, the characters Matt and Liam had my understanding, they&#039;re in their forties and questioning their sexuality. And, having Blue around brings them to new highs. Cops was fast paced from beginning to end, and even though there are only four chapters, the plot was clear and to the point. Who doesn&#039;t love a little danger with their sex? Blue is on a job when she comes across her two guys tied up and blindfolded in somebody’s basement. Seeing them like that turns her on to the extreme, so she takes advantage of the situation and makes them all happy. When it&#039;s all said and done, she leaves them there and goes out a window only to be saved by them two days later.

Without realizing this was the second in a series of books, I jumped right in reading. My first recommendation is that you read them in the proper order – imagine my shock at the speed at which events rolled on! Ms. Leaf made me adore her characters immediately (I really like that in an author), even in such a fast paced read. You are dropped right into the middle of Blue (our heroine) in mid-heist, running into her two (yep, not one, but TWO) boyfriends, Liam and Matt. To further complicate things, these guys are cops……..so we’re off and running! The story came at me fast – there are, after all, only 41 pages for everything to get done, and, believe-you-me, lots gets done! Naturally I slowed waaaaayyyy down to read the naughty hot sex bits, which to me were the best parts of this book. Apparently the three are just exploring sexually, and a little of everything happens…..the guys even discover that man-on-man action is actually quite nice. Hats off to Ms. Leaf for making me like that, too, as it is not usually my interest – but, she made it all tasteful, yet extremely hot. Aw-right, aw-right, aw-right. There would be a five star rating were I not disappointed at the brevity – because this is a story I wanted more and more of! Guess I’ll just have to read everything in the series, and I suggest that you do that, too….then maybe I can come back up and add that last star…. Happy reading!

Oh my goodness! Erin Leaf&#039;s second addition in the &quot;Blue&#039;s Boys&quot; series is so cool!! No flowery words or descriptions. It&#039;s just plain cool. I enjoyed it very much. Blue, Matt, and Liam are back, and they&#039;ve gotten themselves into another little &quot;situation&quot;. Once again, there is humor, action, witty banter, and SEX!! These three are so hot! They smolder. They radiate nuclear energy. The sun is jealous of their heat. Can I be more descriptive? Probably, but I don&#039;t want to waste your time while you should be going out and getting this book. TWo words...club scene. Like the first in the series (&quot;Thief&quot;), the story is short, not even 13,000 words, but it&#039;s so good that it&#039;s not necessary to prolong it. It may get boring if it were a loooooong novel. Blue and her men have fantastic chemistry. It&#039;s obvious that they belong together, even though she&#039;s a thief, and they&#039;re cops. Of course, when their careers cross again, there&#039;s some fallout they&#039;ll have to deal with. This book had a bit of mystery to it along with the action, and it held my attention all the way to the end. Ms. Leaf writes a villain as well as she writes a hero. As I mentioned, this is the second in the series. I suppose it could be read as a stand alone, but I recommend that you start at the beginning so that you can see how everything started. Trust me on this one. If you like your menage stories to be exciting and extremely sexy, this one is for you. Reviewed by Kenna for Cocktails and Books