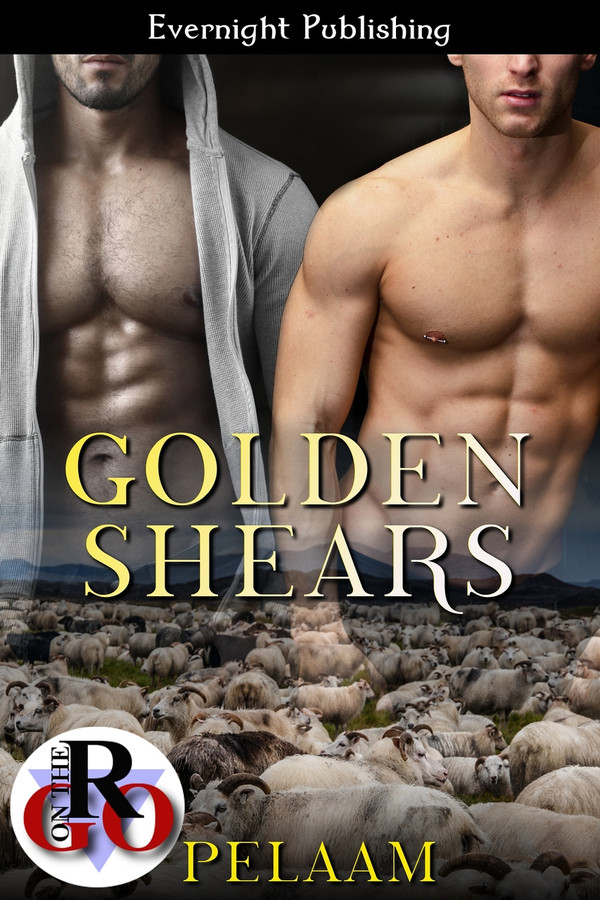 Eric is stunned when the night before his first heats in the ‘Golden Shears’ competition, his ex-boyfriend turns up on the door. Even more so when he finds Justin isn’t alone, and, thanks to a booking error by the motel, will be sharing his motel accommodation.

Eric tries to focus on shearing, and reaching the finals, but he never really got Justin out of his heart. When he thinks things between Justin and his boyfriend Pita aren’t right, he finds it impossible to ignore the younger man.

Can he and Justin find the happy ending they both seek?

“Just a little on the back foot here. Never expected to bump into you.”

“Again?” Justin asked. His face hardened a little, and his brows drew into a slight frown. “Last time we saw each other, you almost shoved me out of your house. I thought we had something. Something special.”

Eric shook his head, and turned away, unable to speak if he continued to look at Justin. “You were fresh from college, with big ideas. You were going to throw away your OE to stay with me.” He shook his head. “You needed to go. See the world. That’s what an Overseas Experience is all about. You were too young.”

“Really.” Justin’s voice was flat. “And was I too young to make up my own mind? You suddenly stopped being my lover and decided to be my father? Except my dad never made any of my decisions for me after I hit puberty. At least he and I discussed things.”

“Maybe you were too young. Maybe I’m just too old.” Eric snapped the words as he rounded on Justin. But his building anger was derailed by the warm look in Justin’s clear blue eyes.

“Fifteen years older. It’s not that much. Look at you. Buzzed haircut, dark tan, solid muscles, and I know how much fur you have under that T-shirt even without the tuft that peeks over. Don’t run yourself down. I never did. I never will. I was angry you threw me out. I’m over that.” Justin continued to make the tea as if it was the most natural thing in the world.

Eric can’t believe his bad luck. The motel he’s staying in has been double booked, and he finds himself sharing a room with his former lover, Justin and Justin’s new boyfriend, Pita. All three men are in the small town for the Golden Shears competition – but Eric can’t help the jealousy raking him over far more than the pressure of the shearing competition. Many years Justin’s senior, Eric had turned Justin away, determined to let the younger man enjoy his youth and freedom. But having that loss now rubbed in his face, Eric is resigned to a hard time over the next few days. But Eric will soon find out that Justin has grown up in a number of ways, and will no longer take no for an answer. This is a steamy short story worked really well for me. Eric and Justin are macho men, both proud and strong willed. There’s no metrosexuals here, or campy sweetness. Only well-muscled farming men who know exactly what they want. I really enjoyed the background of the shearing competition – something I found very fresh and totally different. I also greatly appreciated how Eric and Justin didn’t just fall immediately back into each other’s arms and bed. The author did an amazing job building the sexual tension and drawing out the culmination of the make-up sex. This gave the whole story not only an authentic feel to me, but also greatly increased my enjoyment when that satisfaction of them coming together finally unfolded. With wonderful pacing and what I found to be deeply interesting, multi-layered characters this is an awesome short story. Perfect for a quick fix or a read-on-the-run, this M/M is definitely one I want to reread and an author I plan to search for more of. Recommended.

Eric is attending a sheep shearing competition when his ex-boyfriend turns up at his door. Eric allows his ex and his current boyfriend the ability to use his spare room. Eric was sure he was over his ex but seeing him has changed his mind. Justin is Eric’s ex and after a couple of years apart seems to keep turning up everywhere Eric is. Justin brings what Eric assumes is his boyfriend but Eric has doubts The chemistry between Justin and Eric is blistering even after all the years apart. It’s apparent that there was still feelings on both sides that they needed to address. The sex scenes was hot and steamy. While I would have loved if this book was longer to see how Justin and Eric turn out in the future. I found this book is very well written with a very believable plot. The main and secondary characters were fascinating and enthralling. At twenty-nine pages long, this story had a well-defined beginning, middle and end. The ending of the story was a bit predictable but it was more the ride to the end that was more important. Overall, this was a great book.

Book Review Sometimes letting a lover go, especially if he is a lot younger and not yet established in life, may be the best thing for his future. But when said lover comes back a couple of years later and both are confronted with the reality of their feelings, it can either go well or horrendously wrong. This is the story of one such reunion, as unexpected as it is initially tense. Eric, a sheep farmer and the narrator of this story, has done his best to let Justin go so the fifteen year younger man can get the experience he’ll need to get a good job, but he has never really stopped loving him. So when he turns up at a sheep shearing competition, with what looks like a boyfriend in tow, Eric has no idea what to do. He knows he should not be jealous, but he cannot help himself. I was grateful he ended up confronting Justin, or they might have never figured out the truth. Justin may be the younger of the two men, but he is determined to make Eric understand that this is irrelevant where their love for each other is concerned. He may (grudgingly) be grateful that he went away when Eric told him to get on with his life, since this mean he now has a better job. But that in no way means he doesn’t want to pick up where they left off two years ago. And if he has to resort to a little subterfuge to get there—so be it. If you like stories set in New Zealand, if you enjoy reading about men with an age different between them, and if you’re looking for an entertaining read about two guys finding love against the odds, then you will probably like this short story.

First off, kudos to this book for being the first one I’ve ever read that incorporated sheep shearing competition into it! That being said, Eric is a shearer attending the competition. The motel where he’s staying has overbooked and who shows up at his door but his ex-boyfriend, Justin, who has a gorgeous man, Pita, in tow with no where to stay but Eric’s room. Let’s get it out there that Justin is younger than Eric and this was a huge reason Eric pushed him away. He may not have gotten over Justin but it was his decision that they break up. It’s been two years and Justin is just more beautiful than ever. Serves Eric right to have to watch him with Pita! There is one edit issue that made me laugh. “He rubbed the growing bugle at Justin’s groin.” Hmm, bugle, well then! Eric’s treatment of Justin two years ago was harsh and thought it was a “for your own good” type of thing, I wish he had groveled more. Justin is a sweet person, intelligent and knows what he wants.