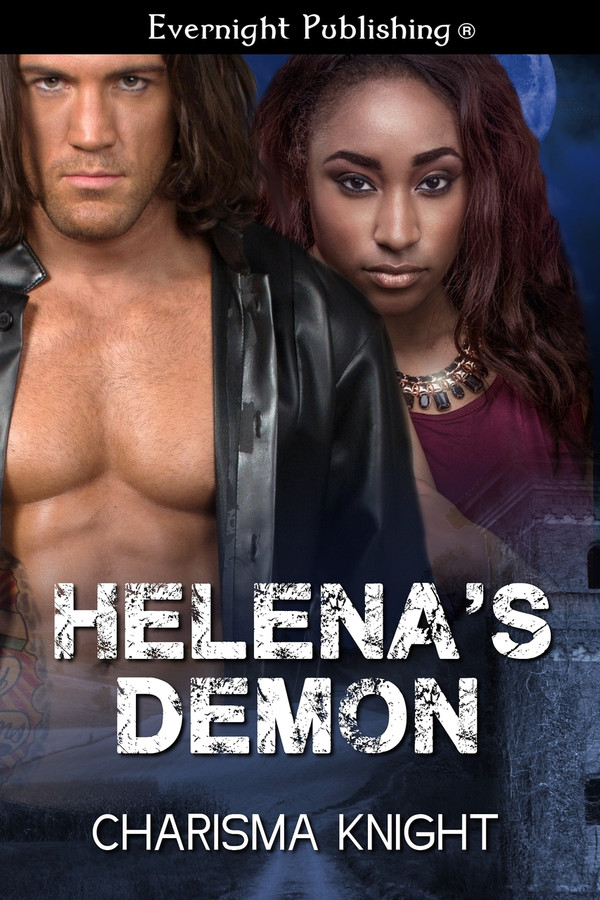 Helena never considered the consequences of striking a bargain with her personal demon, Cyn. The entire Pearsall line was cursed, so what did she have to lose? She would have done damn near anything to stave off bill collectors and ensure her aunt received the best medical treatment possible. When her luck turned around and it was time to make good on that bargain, Helena discovers she's giving up more than her soul. Is it possible to fall in love with a demon?

After sealing the deal with Helena's blood, Cyn is determined to keep the mocha-skinned beauty by his side. The curse had claimed the majority of her family and now he must work extra hard to ensure her safety. However, there's more to Helena than meets the eye. He soon discovers she is the key to ending the Pearsall curse and an instrument for unleashing Hell on earth.

After carefully constructing the circle, Helena had cut the palm of her hand, allowing the blood to drip into the chalice. Quickly she added a few roots and herbs.

The skin on the back of her neck tightened and prickled. Soon after, ice-cold fingers crept up her spine. Helena winced and closed her eyes. Her demon was toying with her, she could tell.

The cold fingers pinched her already hardened nipples, and she sucked in a breath. A strong presence enveloped her as an eerie growl made her heart race in fear. Its breath was hot on her skin, and she yelped when he gripped the delicate flesh between razor sharp teeth.

“Why have you summoned me?”

A wicked baritone sounded to the right of her, making her shiver. This was definitely a bad idea! The demon was supposed to be on the outside of the circle, yet he sat right next to her. Damned Pearsall family magic!

“You know why?” She shivered again when she felt a clawed hand grip her curly tresses. The demon jerked her head back so that she was staring into its gold eyes. It was in true demonic form, yet, she was still attracted to it.

“Don’t play games with me!” the beast grated out. “What do you desire?” A sly grin forged itself on its porcelain features. His face was adorned with intricate tribal markings that seemed to glow in her presence. The fiery pattern wove itself down his neck and covered half his chest, eventually spiraling down his arm. Black hair dusted across his wickedly good-looking features, falling well past his collarbone.

“I need help with the bills. I’ve been working my fingers to the bones, and I always come out on the bottom.”

“I’ll do anything.” Helena wanted to believe those words. She concentrated on Aunt Mimi. It was the only way she could survive this. Out of nowhere, a scroll unfolded itself and fell to the floor in front of her. Beside it, an althame appeared.

“You will do any and everything I desire,” he murmured in her ear as he stripped her bare. “Here is our contract. Read it over, sign your name in blood.”

“What are you? Deaf?” The creature frowned, making himself appear more sinister. “Signing your name in blood allows me to give you all that you desire. Instantly. After a year, we will meet, and you must live with me, until the debt is paid in full.”

With shaky fingers, Helena picked the scroll up and read. It was almost difficult as the demon played with her body. His hot tongue teased the tender spot on her neck. House, car, and unlimited funds caught her attention. Right now, that was more than she had. The money would be more than enough to stave off the wolves at her front door. She mouthed through the part about living with Cyn. Hell, it was only until the debt was repaid. She could deal. She sucked in a sharp breath at the impending orgasm.

With a grunt, she picked up the althame and cut herself. A soft curse and a wince later, she signed her name with the tip of the althame.

“Good girl.” The demon grinned, bowed his head, licking her wound clean. “You belong to me now.”

Helena gasped. “Now?” The demon wanted to screw her right here and now in his true form? Her stomach twisted and her pussy clenched several times. To someone other than a Pearsall, this was totally taboo. Hell, it was bad enough she summoned him. Having sex with him would surely send her soul to hell in a handbasket.

“I just want…” he whispered seductively in her ear as his fingers slipped beneath her silken panties, “to taste your sweetness. I have what you call, an oral fixation. I love the taste of a woman when she’s wet and wanting. You’re all that and more, Helena.”

“Unh!” Helena gasped as the demon ripped her panties and toyed with her clit. The forbidden pleasure was so intense, she bit her own lip as she squirmed in pleasure at the demon’s touch.

She gushed as her demon touched the opening of her pussy, her body burning with hot promises of sinful delight throughout the night. She cried out when he gently entered a digit inside her, spreading her hot juices around her swollen clit.

The demon bit her neck, nibbling her heated flesh as Helena’s body rode the first few intense waves of her release.

“Oh, fuck!” She squealed in a high-pitched voice as the waves of pleasure encased her for what seemed like an eternity. She shuddered when the demon sucked on its digits. The deep, animalistic growl he created made her want to beg for more. “Please,” she gasped.

“Don’t,” he warned as he licked her cream off his fingers. “If I fuck you now, the deal is off and I’ll drag you to Hell with me.” He thrust his face close to hers. “Is that what you want?”

“No, no, no!” Helena panicked, and she thought of Aunt Mimi.

“Relax,” he said quickly. “We’ll have more than our share of time together a year from now. In my long existence, I’ve learned that patience is a virtue. Just don’t fuck me over, Helena. As your personal demon, I’m giving you the benefit of the doubt.”

With that he quickly disappeared, leaving Helena struggling for breath she was sure she wouldn’t achieve. Her chest heaved, and her body burned in the areas he’d touched. Unsure about standing, she remained in the circle almost an hour after the meeting with her demon.

Silas Taylor might have made a grave mistake when he took on the dark forces to justify his own means. Will the sacrifice of his generation’s future be worth it or is he making the biggest mistake of his life? Helena Pearsall was in league with a demon but considering her family’s past, she didn’t have much choice. Fortunately for her, he was one of the most picture perfect, solid-structured creatures she ever laid eyes on. If she had to make this sacrifice, then her heart and her loins were in total agreement. As much as the demon seemed abrasive towards her, he longed for her essence and her hidden enticing darkness. I love the concept of this story. As much as there are other demonic type stories, Helena’s Demon seems to put a twist to it. The character not only summons the demon but believes she of all people can tame his exotic, sexual darkness and that in itself is a hot feature to the story. Her family’s curse keeps her from living a normal life and for that, she has Silas to blame, but all she can do now is to try to change her future. Charisma Knight knows how to keep you enticed with strong characters and a hard core storyline. You are going to enjoy this demonic tale.

There was simply too much going on for this to be the spectacular read it could have been. I liked Helena and Cyn. Cyn, for a demon, really wasn’t that bad. Helena was devoted to her family which is always good. Still, I just wish it had been longer so I could have fully invested in their struggle.

I LOVE CHARISMA KNIGHT AND THIS BOOK WAS NO DIFFERENT. I HOPE THAT THERE WILL BE MORE BOOKS IN THE SERIES.

When Worlds Collide by Charisma Knight