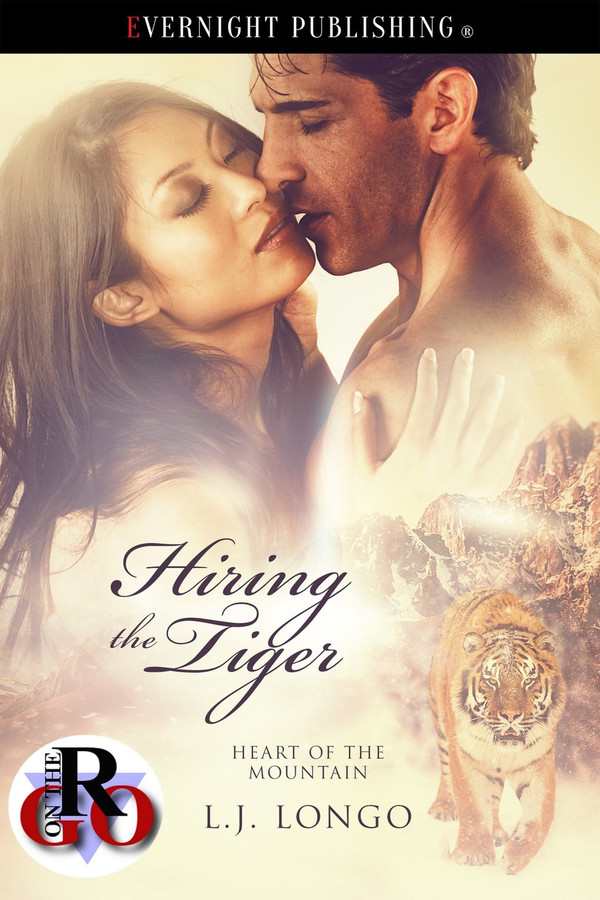 Heart of the Mountain, 1

A tiger shouldn’t be picking tea-leaves and carrying luggage, but that’s the only job Navarro sees in his future. He’s learned to be humble since he and his friends, a wolf pack, exchanged their former careers as highway robbers for prison.

Then Lady Jasprite Doughton, a merchant with all the grace of the far East and the wealth of the West, whirls through the village on the back of a dragon and reminds Navarro what it means to want something. With her dominating sexual tastes and her powerful personality, Jasprite challenges his body, his lust, his loyalty to his friends, and his own worth.

After all, is gold enough to buy a tiger?

Fuck the bet, he’d take for her free. Now, he wanted her.

Now she was here.

He smelled her in the hallway, potent and sexual. She walked with quick long strides and opened the door before he could decide if he ought to be found in the balcony or on the bed.

Jasprite locked the door after she entered, then dropped the key into her front vest pocket. She grinned at him, the kind of leer men give the village girls washing their clothing at the river. It made him feel curiously misplaced.

“So, the captain was wrong. The chest was delivered safe and whole. You didn’t even open it.”

“I didn’t have the key.” He’d resisted the desire to pick it. “Ramsay also said you ought to hire a soldier to do this work.”

“A miscreant will do the job more thoroughly.” She pulled off her suit jacket and hung it on a wall hook, never taking her eyes from him. “Though, I’ll be honest, I don’t like animals. Especially large ones. They don’t take direction well. Your witch said—”

“Yenna’s not like that.” He wasn’t some creature who belonged to another woman and had been cast aside. It was vitally important that she know. “She never—”

Nav’s lip curled before he could control his face.

The lady’s eyebrow rose with annoyance. He wasn’t playing properly. He tried to be timid again. “Did you want proof, Lady Doughton?”

“Never had a tiger for hire.” She grinned at her name then pulled the string of jewels out of her bun, plucked something from the string, and tossed something over to him. He caught a key. “Open the chest.”

He knelt and opened the red chest with a game smile.

Under the layers of cotton were shackles, collars, whips. Long thick phallic statues of carved and polished wood, glass, and shining metal molded for a very specific purpose. Gags, hoods, dozens of other toys he’d never seen even in the most wicked books.

She chuckled, not a pleasant sound. “I knew you wouldn’t be ready.”

“Uh…” He looked from the box to her. He wanted her strong thighs, those tempting breasts, her cruel smile. But the box … men were supposed to use toys like that, not women.

She hummed, unimpressed with his answer. She sauntered over and peered with him into her box of deviance. Her thighs were level with his face, and he inhaled the rich fresh wetness between her legs. He wanted her so much.

“Yes, this is exactly my problem with large animals. Especially ones that belong to other women.” She gripped his chin.

She grinned. “I know who you belong to.”

Nav shivered a little at the ownership in her confidence.

Jasprite let him go. “I do like a pretty face though. So, I’ll make an exception for you, tiger.”

She could still tell him no? He wasn’t sure he had the option himself.

The woman unbuttoned her vest. “Pick out what you’ll let me use on you and I’ll tell you what you’re worth.”

Masks of a Tiger by Doris O'Connor

The Dishonest Lover by L.J. Longo

Freeing the Witch by L.J. Longo