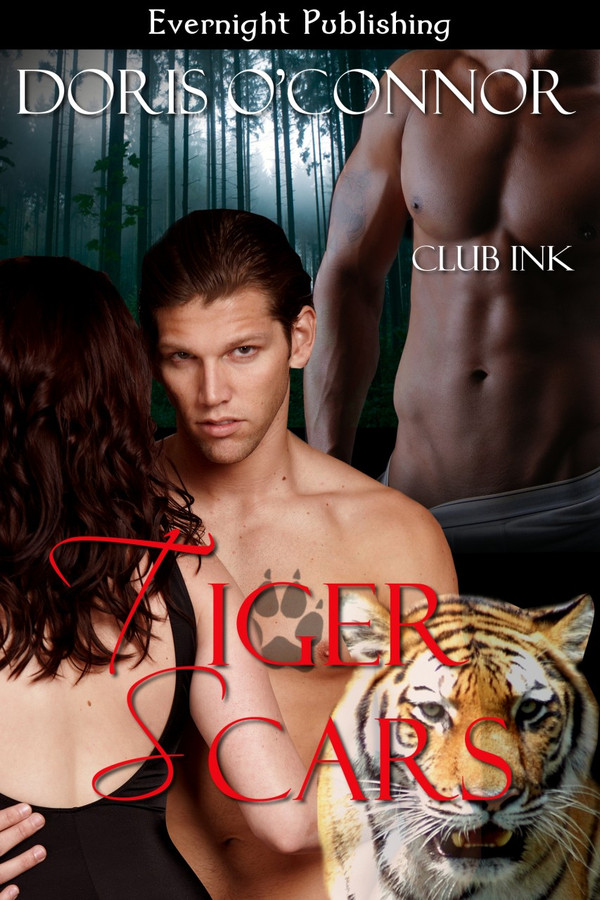 Can some scars ever truly heal?

Cherie ran away from Ink once. She is not going to get the chance to do so again. But helping her heal will take all of Ink's skills as a Dom. Using Shibari, knife play, and ménage sex, he shows her that pleasure can be found in the things that haunt her.

Emotionally and physically scarred, Cherie has sought refuge at Club Ink, where she keeps everyone at arm's length. When Ink forces her to face her demons, does her submission hold the key to her future happiness? Or will their shared past destroy them once and for all?

"Stop fidgeting." He delivered the words with a quick openhanded swat to her mound, and Cherie's hips bucked off the bed. She bit her lips, and he smiled at her moan when he trailed his index finger through her wet pussy lips and up towards her anus. Her increased scent and the renewed gush of moisture coating his hand told him all he needed to know, and he breathed a sigh of relief. Thought of punishment went out of his head, and instead he followed his tiger's instincts and lowered his head. He inhaled the sweet scent calling him, his fingers digging into Cherie's thighs to spread her wider still. Her nether lips opened beautifully, so all of her quivering, glistening cunt was there for him to feast over. He had to taste her, to bring her to the brink of orgasm again and again. His smile turned wicked, and he blew against her wet folds. Cherie bucked underneath him, her long drawn out hiss of pleasure music to his ears. He allowed himself one long, slow, lick along her slit, and then bit down on her clit.

Every muscle in Cherie's body tensed; her breath hitched; her thighs trembled and clenched around his head, and his smile deepened. Nothing used to bring her to the brink faster. He blew against the engorged bud again and allowed his claws to run out. He dug them into her thighs just hard enough to break the skin, to remind her who was in charge.

"Do you need help keeping these open for me?" He growled the words into her pussy, allowing himself another slow lick of her sweet juices, before he raised his head to look at her.

Eyes wide as saucers, her skin flushed, Cherie shook her head, and Ink withdrew his claws and sank his thumb into her nether hole.

His tiger roared at the mark of his possession, Cherie's whimper of submission making Ink's cock harden in record time again.

He trailed the fingers of his other hand along the lips of her cunt, swirling it slowly around her pearl, and Cherie panted her answer.

He flicked her clit once, twice, and inserted another finger into her sphincter, all the while keeping up the circling motion around her clit, designed to drive her higher and higher. His balls grew tight, and his tiger growled at the soft feminine moans filling the air.

He'd played with plenty of willing and experienced subs, and trained lots of new ones, but nothing beat the sweet responsiveness of this woman. That she would give herself so trustingly to him after everything that had happened to her, blew him away. The tell-tale tightening of her quivering muscles under his fingers told him how close she was, and he stepped up his assault.

His warning just seemed to excite her further, and he groaned watching her body climb. His cock throbbed, and he tortured himself by rubbing it along the velvet skin of her hip, leaving a wet trail of his pre-cum behind. It took every ounce of his self-control to not just allow himself to slide deep into her welcoming heat. She'd fit him like a glove the first time round, so tight and hot, it had been a miracle he'd had managed to pull out and not spill his seed inside her, like his tiger had urged him to do. He'd only ever lost control with Cherie. From the minute his tiger had scented her all those years ago, he'd known she was his, and she always would be. But he was older and wiser now, and they had a lot of ground to cover still, until they could even think of moving on. The reminder how much was at stake here focused his sole attention on the woman writhing underneath him. Her body tensed, her skin flushed all over, and just as she was about to fly off into ecstasy he withdrew.

Her eyes flew open, and she tried to tense her thighs around him to stop him from leaving. Silly little tigress played right into his hands. He bit down on the soft skin of her inner thigh and slapped the globes of her ass. The red imprint of his hand stood out against the pale skin, and Cherie froze the minute she realized her mistake.

"I'm, sorry, Sir. I didn't mean to." Her husky whisper had him harden to the point of pain, and he slapped her ass again, satisfied to see the shudder going through her. A few more slaps followed, each one making her wetter until she twisted onto her side of her own accord, grinding her thighs together to get herself off. He put considerable more force behind his last slap to her now red hot ass and then pulled her down the bed as far as he could, stretching her legs wide and turning her on her front.

"Such pretty words, but you don't mean them, do you?" He stood back perusing her, and he chuckled at the mutinous look she threw at him over her shoulder.

Much better, baby. Show me some of your sass.

He had to look away to hide his smile, but oh it felt good to have her goading him whilst she was completely at his mercy.

Other Books in the CLUB INK series:
Riding Her Tiger

Masks of a Tiger

I have fallen in love with this series. the author is wonderful. she creates a world that&#039;s believable and hot hot hot. great characters and a good plot

This is the second in the series so I was a little worried I’d be lost and despite a few small things, I was pretty much pulled into the story from the first scene. BDSM is big right now and I think Doris O’Connor is an author to look out for. This is what I craved reading. A book that wasn’t a book, but a new world I could sink into for a while. Cherie is bruised and broken inside. She rejects her mate, Ink, Which is a badass name for a character. Anyway, He is running on his last thread but blames himself for her emotion breakdown. The connection between Cherie and Ink is so deep and almost real in a way. I really felt their love and Cherie’s fear with Ink’s frustration. The characters shined in this book and then there’s the plot. It gave this book another notch on the fantastic scale. Tiger Scars is a book you should not pass up, heart wrenching, sexy and utterly satisfying.

Jordan “Ink” Fielding is an alpha Dom and co-owner of Club Ink, a BDSM club that caters to the paranormal crowd. Known for his hard-core BDSM play and uncanny way of getting into his sub’s minds, Ink is as respected and desired as he is feared. Seeing his twin brother happy with his new wife and expecting their first child has Ink deciding that it’s long past time for him to claim his own mate who’s been refusing him for years. Cherie works at the club but doesn’t sub in any scenes or themed rooms since fate intervened and made her fear what she once craved. Now at an impasse she needs to finally conquer her fears or leave the club, and Ink, forever. This is a really good BDSM themed erotica book that included some extreme elements and shibari. Having read book 1 of this series I was able to get right in and understand and enjoy the character dynamics of the characters but if you haven’t read book 1 I’m not sure you would feel the same. For the most part ‘Tiger Scars’ is a stand alone book but to get the full flavor I would recommend reading book 1 first. That being said I was one happy girl. HAWT steamy scenes including one juicy m/f/m scene knocked my socks off. The D/s play stayed true to core principles but had the luxury of including paranormal shape-shifting tiger aspects. Good stuff. The actual story line isn’t too in-depth or complicated. There are mysteries to uncover and a suspense twist to this book that had the potential to make this a well rounded complete story but the gaps and unanswered questions were problematic for me. For example, the source of Cherie’s demons were technically answered but didn’t make sense. More of a back story or explanation of this would have been appreciated. And the timing of events and way Ink found out about Cherie’s problems were too convenient and gave the appearance of addressing it in a short efficient manner. But. The final story twist that lead up to the HEA ending was terrific and satisfying to the point I am looking forward to the next book which I think will be about Grisha. This is a book for the BDSM lovers who like a paranormal slanted theme. It has some delicious D/s play that gets pretty involved and steamy. Definitely a recommend read from me.

Both of O&#039;Connor&#039;s Club Ink books are erotically delicious. What could be hotter? She has all the elements... sexy shape shifting alpha hero Doms... holy hell! Then add in the women who fall for them. The heroines have backbones, strength to overcome obstacles but that tender need to submit to their men. Some of the scenes made my toes curl and I may have even blushed once or twice. If the characters aren&#039;t enough, the plots in each book draw you in so readers actually care what happens. Nothing is necessarily what it first seems to be at Club Ink. Grab a copy and see what I mean!

Ink is the baddest of the bad boy doms. He is a tiger shifter who runs Club Ink with an iron will. He is tough but fair…and he hides behind his Ink persona so that no one knows his emotional state is terribly disheveled. Cherie was in love with Jordan once. Before that terrible instance when his possessiveness and suffocation drove her to make a terrible decision to leave him behind. Now they have both changed. Jordan is now known only as Ink, and he has frozen his emotions to the point that she may never be able to thaw him out. Tiger Scars is sexy and arousing with BDSM elements, but nothing too over the top. There is a very mild menage scene, too. The characters are charismatic and the plot is intriguing. There were several typos in the book, and this surprised me since Ms. O’Connor’s books are usually fairly well edited, but it was nothing that deterred from my overall enjoyment of the book. I am anxiously anticipating Grisha’s book… He needs someone to love!

Masks of a Tiger by Doris O'Connor