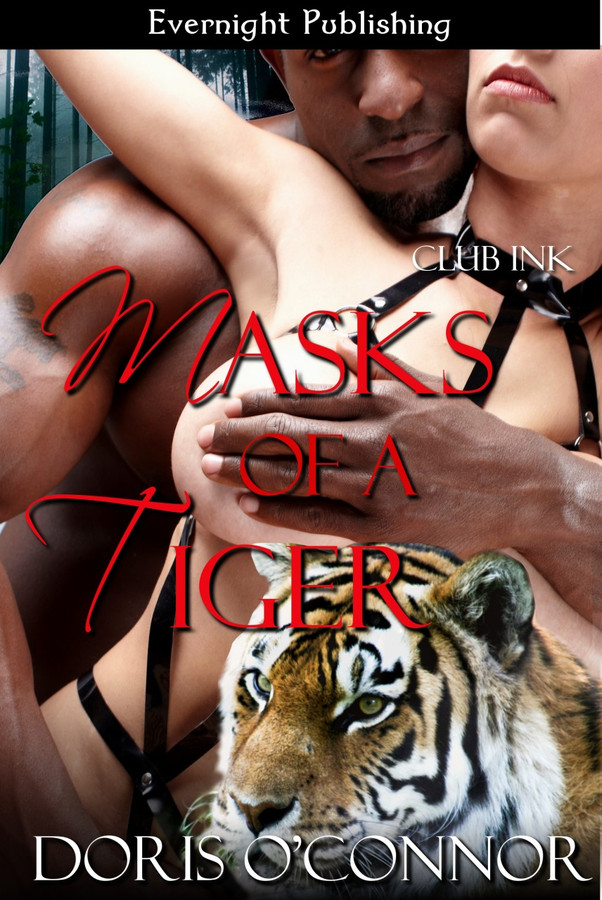 Neeve doesn't understand why any normal person would choose to wear a collar like a common house pet. So, the collaring ceremony of her best friend's sister-in-law is the last place she wants to be, even if the hot men watching her send her insides aflame.

Never one for missing the opportunity to teach a bratty sub manners, Grisha intends to show the fiery little redhead the error of her ways. He doesn't expect to see her drawn to the flame like the proverbial moth. When she hurts herself in ways that even a Dom of his experience finds hard to witness, he knows he needs to help her.

Will their sexual chemistry be enough to chase away their demons and burn away their masks? Or is the submission Grisha demands too much for Neeve to accept?

The deep, animalistic growl erupting from his chest caused more of her juices to flood her pussy, and she hastily followed his order of, "Hang on to me, sweetheart. We need to take this to the dungeon."

The way he said the word dungeon sent a shiver down her body, as images of him in another dungeon filled her mind. The barely functioning rational side of her brain screamed at her what the fuck she was doing, but her body just wasn't listening. Being this close to him, the need to stay in his arms consumed her. Her empty pussy ached to be possessed by this man. The heat of his thick, rock hard cock burned her through his jeans, and when he placed her on the huge bed dominating one side of the room, she didn't want to lose the contact. He chuckled into her neck and licked the sensitive skin. The curiously rough texture of his tongue sent her nerve endings tingling, and she locked her ankles behind his butt, and ground her clit against him again.

God, she was so close, so damn close, if only…

Her eyes flew open, and the world tilted when he disentangled himself from her in one easy move. Before she knew what happened he had her lying over his knees, her dress pulled up to her hips, thong pulled down to her knees pinning them together. One of his arms over her back held her down.

"Don't move, sweetheart, or this will hurt." She froze. Surely he wouldn't spank her? And why did the thought of that make more of her juices leak out of her? Why was she not screaming no, or red, or whatever the hell one screamed in such circumstances? Instead, she was in danger of staining his jeans with her arousal.

"Don't you dare spank me. I'm not five years old!" Even to her own ears the protest sounded feeble, and Grisha swatted her ass several times in quick succession. The force behind those swats pushed her further into his lap, and tears sprang to her eyes. He massaged her ass cheeks, and the hot burn eased and spread in tingles of awareness. Her pussy clamped, and she felt the wetness on the top of her thighs.

Grisha's amused chuckle vibrated through her, as he trailed something cold and smooth along her slit repeatedly. He followed the object with his fingers, the heat of those digits burning a path of awareness along her labia. She jumped when he circled her clit, and he murmured his approval at her panted reaction. She tried to push herself against that hand, and she screamed in surprise when he pinched her clit.

"That's not the way this works, sweetheart. You'll come when I let you, not before, and not until you tell me the truth."

Again he traced her slit with the object, and Neeve bucked when it started vibrating. He pushed the toy slightly into her channel, and her cunt clamped around the barely there invasion, her internal muscles desperately trying to pull it in further to no avail. Grisha kept it there on the edge, driving her insane with the need to come. The orgasm hovered just out of her reach, and she groaned her frustration to the floor, pummeling his legs in the process.

Another swat to the ass was her reward. Her tender flesh stung and burned, the slight pain adding to the assault on her senses.

"So, what will it be, Neeve? Are you going to tell me the truth, or do I carry on with your punishment?"

"P-punishment?" Neeve panted the words as her body climbed again. "You call this punishment? Is that all you've got?"

Why she felt the need to goad him she couldn't say, but by God, her body might be betraying her, but that didn't mean that she would give in that easily.

"No, sweetheart, I call this torture, and I can keep this up for hours." She heard the smile in his voice, but there was an unmistakable edge of command in those words, and her stomach clenched in excitement.

"You're so fucking wet for me, and your ass is so pink—it’s a beautiful sight, sweetheart. So tell me if you’re not a sub, then why is your essence staining my jeans? Why is that sweet cunt of yours quivering and weeping? It's just waiting for my thick cock to fill you, isn't it?"

The swat to her ass stung, and his voice could have cut glass.

"Let you what my sweet, Neeve? Let you come? Do you need to come?" His husky words in her ear grounded her, as he molded his naked chest against her back and pulled her hair until she looked sideways and up into his eyes. Glittering, golden orbs of intensity they pulled her into his will, and she couldn’t have looked away if her life depended on it.

"Yes," she whispered, and he smiled.

"Then what do you call me?"

His brilliant answering smile of approval spread through her and left darts of heat along her skin.

"And you'll answer my questions?" he asked.

"Then come, sweetheart. Come for me now."

Other Books in the CLUB INK series:
Riding Her Tiger

Masks of a Tiger

Neeve has a whole bag of issues to sort through. At first meeting her I could see she is hurting and a very angry young woman. She covers up her feelings with snarky and rude comments and walks around with a personality like a shield maiden. Little does she know she will be meeting her match. The reason I really enjoyed this short read? It’s because of Grisha, his personality, the way he was able to read Neeve and be there for her, giving her the gift of being able to unwrap herself from her demons. Grisha showed his Dom style by taking the sub’s needs and putting them foremost. As always because of the lifestyle, any book that shows checking the restraints, asking about safe-words and mentioning aftercare will always be on the top of my A-list. The scenes were both hot and I could tell the writer didn’t just put words down. This is book three so for readers who jump into the middle of the series, a bit of Grisha’s reasons why he is like he is might be missed. But it really didn’t take from the actual story, so it may be able to be read as a stand alone. I picked up this book, because of the fire play, which turned out to only be a small scene but the content of the story made up for the small bit of fire. Readers who look for some variety in their BDSM but also want the love and erotic romance should give this novella a try. Share this:

In this third installment of Doris O&#039;Connor&#039;s Club Ink series, it is Grisha&#039;s turn to find his happily-ever-after. In both of the earlier books, Grisha was a part of the storyline and then stood back and watched as his friends walked away with their soul mates. In this BDSM club that caters to shifters, a bratty sub just might have found her match. Neeve insists that she is not submissive and that she cannot understand why her friend wants to be collared, but there is a lot going on under the surface. Watching Grisha and Neeve interact was really fun - she was automatically attracted to him, but kept trying to run away. Grisha, however, had a tiger under the surface driving him to claim and protect that he had to keep reining in so that he did not scare her away for good. Both characters had difficult pasts and seemed to be drawn to that similarity. I really felt for both of them as they opened up to each other about the past and the damage done to them. This entire series is fun in a ‘BDSM light’ way and creative in that humans and shifters mix in the club, some unknowingly.