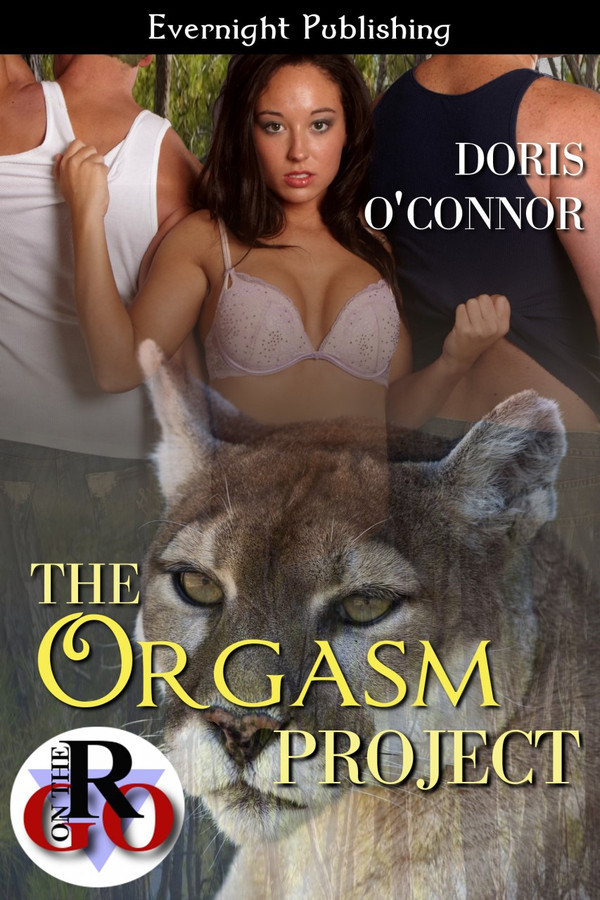 What's a girl to do when her best friend confides her inability to orgasm? Set up the Orgasm Project of course, and Maria knows just the guys to do it. Her hot as Hades brothers might be full of themselves, but at least they're safe. What can possibly go wrong?Anastasia wants the ground to swallow her whole when she meets the twins. How embarrassing can this be, even if the gorgeous hunks set her knickers aflame with just one look? Jake and Carter know their mate when they see her, and nothing is going to stop these cougar shifters from claiming her. Their night of passion leads to discoveries neither one of them is prepared for.Has their bite awakened a monster or their destiny?

She opened her eyes to find Jake smiling down at her. Carter's gaze, too, sought hers through the rear view mirror, and a shiver of unease went down her spine at the disapproval she read in his eyes—eyes that bled from blue to golden and back again as she watched in stunned fascination.

"What are you?" The question left her lips before she could stop herself, and she inwardly groaned at her stupidity.

"You know what we are." Jake said, his hot breath a whisper's breadth away from her neck as he sniffed her again. "Look into yourself and tell me that you don't feel this connection. I know you do. Your body gives you away as surely as your sweet scent. You're wet for us just thinking about what we might do to you, and that's not fear I can smell, but arousal. You want us as much as we want you, have wanted you from the first moment we caught your scent all those months ago."

Anastasia shook her head and pushed against his chest. His heartbeat thundered under her fingertips in tune with her own galloping rhythm. The fact that he seemed as affected as her by whatever was happening between them gave her a heady rush of feminine power. Liquid arousal pooled between her thighs and slicked the top of her legs. She put up no resistance to Jake's questing digits trailing up her inner thigh. Underneath the skimpy dress she had worn at Maria's insistence, his hand inched ever upwards until his knuckles brushed against the damp fabric covering her slit, and she bit back a moan when his thumb found her clit. That normally shy little bundle of nerves contracted under that slight touch and seemed to swell in need. Jake caught her groan in his mouth, and Anastasia forgot any objections she might have had at the first swipe of his tongue inside her mouth.

If she thought he smelled good, then he tasted even better. His musk exploded on her tongue, and she opened to his gentle insistence. He swooped in and took possession of the kiss. One hand fisted in her hair while the other still showed homage to her little nubbin, and she gasped into the ever more passionate kiss, when one of his incredibly long fingers slid under the elastic of her thong. She was so wet that he slipped right into the tight clasp of her body, and her internal muscles contracted around that digit. He growled low in his throat, and she ground herself against his hand as his thumb settled on her clit.

He added another finger and then a third, thrusting in and out of her needy pussy in tune with his tongue's thrusts inside her mouth, and Anastasia gave herself up to the ever more urgent demands of her body.  Her hands fisted in his shirt, as the tingles started deep inside her core. Like a tidal wave of sensation they grew and tumbled forth, retreating a bit with every thrust, only to double in force with every faster pump of his fingers inside her channel.

The car lurched round a corner and then came to an abrupt stop. Cool air rushed into the heated interior, and Anastasia moaned her denial when Jake withdrew his fingers. In the blink of an eye she was freed out of her seat belt, and Jake broke the kiss to shift her body backwards. Carter's strong hands gripped her thighs, and she caught a glimpse of his glowing eyes, before he buried his head between her thighs. Her underwear gave way with an audible rip, and then his hot breath on her swollen folds robbed her of any coherent thoughts.

"My turn to taste her, brother." The growled words vibrated against her slit, seconds before his tongue delved into her quivering channel. Anastasia arched her back in desperate need to get closer to the hot mouth he used to such devastating effect on her clit. Jake chuckled in her ear, and she saw him lick his fingers, slick with her arousal. The sight was incredibly erotic, and she could taste herself in the kiss he gave her. Carter chose that moment to bite down on her clit, and she screamed. The barely functioning side of her brain marveled at that need-filled scream, muffled as it was by Jake's kiss, and she clamped her thighs around Carter's head, as she started to tumble over that elusive edge no man had ever managed to help her over.

Unlike the weak orgasms she had managed by her own hand, this one took her breath away. All sense of time and reason disappeared as her body convulsed under the hands of her lovers. Carter pushed her over that edge again, and again, and again, whilst Jake's hands played with her breasts and nipples. He rolled each hard nub between his thumb and forefinger, pinching hard, and the sharp pain zinged straight to her clit.

Jake finally broke the kiss and nibbled his way down her neck as her body shook in delicious aftershocks.

"All ours," the men grumbled in unison.

I was gifted a copy of this book in exchange for my honest opinion and a review. This is the first book I have ever read by Doris O&#039;Connor and for sure I was excited especially when I seen the title it caught my eye smile emoticon and then some I just new I had to read this book. What&#039;s a girl to do when her very best friend confides her biggest secret to her that she has an inability to orgasm? She sets up the Orgasm Project but of course, and Maria she knows just the guys to help. Her hot as Hell stubborn full of themselves brothers, but at least these two are safe right? Could anything really go wrong? Anastasia really wants the ground to swallow her up whole, when she meets the most mouth watering hunky twins. How embarrassing is this, even though these gorgeous sexy hunks set her panties on-fire with just one simmering look that&#039;s all it really takes for her. Jake and Carter know that with just one look that this is there mate, they owe it all to there sister. know nothing at all is going to stop these two cougar shifters from claiming her once and for all. Their night of pure passion leads them to discoveries that neither one of them could ever truly be prepared for. Will there bite be awaken their monster or there destiny of a Happily Ever After. Three words to describes this book Hot, Smouldering, Sexy. each of these words are apt for this smouldering short story. I loved everything about it yes it is a quick read but none the less just as satisfying actually I would say its a pantie dropper. Anastasia is a great character and my favourite she goes with her gut instincts and goes with Carter and Jake even though deep inside of her something is saying what the hell are you doing with these men you don&#039;t even really no, but luckily she doesn&#039;t listen and goes with her gut feelings. Carter and Jake wowza these are two fine specimen of manliness and shifters as well.... Bonus me thinks. They are both such strong men with hearts of gold and a protective streak that runs so deep, these are just the right types of men that Ana needs to gain the passion she truly needs. I have to mention Maria she is full of spunk and sass I just loved her id love to see her get the happily ever after she deserves. I cannot wait for the next instalment of this super hot series 5 Out Of 5 Hearts From Cariad Books

Yes, yes, YES! A quick hot read. Loved it. I really enjoy this line from Evernight Publishing. The stories read fast and hit my sweet spot, hot and spicy. You can&#039;t go wrong with Doris O&#039;Connor, she delivers and she gives you a sweet ride with The Orgasm Project. I definitely recommend this one.

The Orgasm Project is a short read by Doris O&#039;Connor that has one major flaw...It&#039;s too short! Anastasia confides in her best friend Maria that she is unable to have an orgasm. So Maria comes up with the perfect solution, her brothers, Carter and Jake, two hotties that have been lusting after Anastasia for a while, but they have a secret. They are shifters, and the action starts as soon as they take Anastasia out of the bar. This book is hot, hot, hot, and as I said above, the only flaw is that it is way too short which doesn&#039;t allow the reader to get into character backgrounds. But all in all I thoroughly enjoyed this short erotica.

The Bear Project by Doris O'Connor

The Mating Project by Doris O'Connor