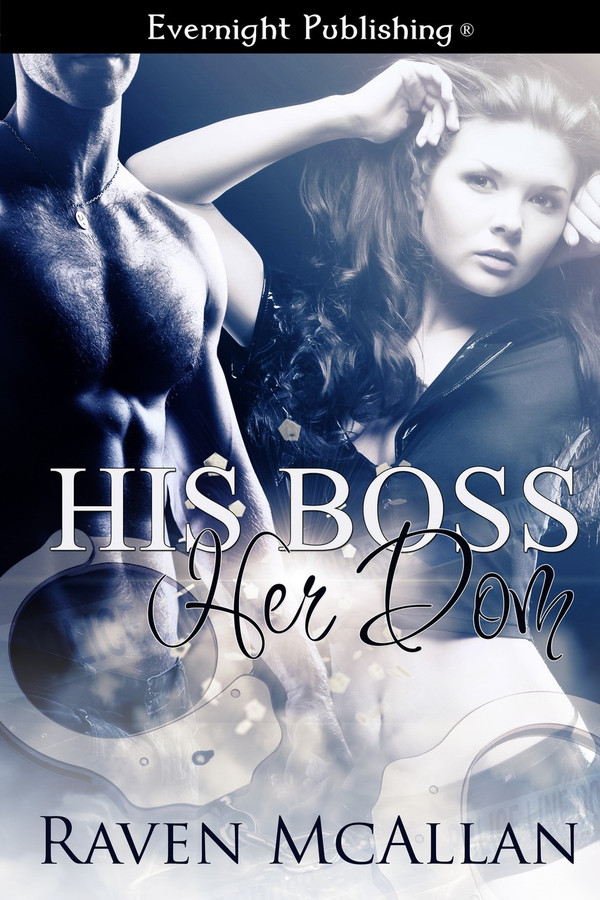 Having a relationship with your boss is never easy, especially when it involves kink. Jamie might need to salute Eva and call her Ma'am at work, but when it's just the two of them, he is Master to his puss.

They are determined to make their unusual situation work, but, first they have to solve the case of the shady next door neighbors.

Eva moved her head and her hair pulled and stung her scalp. The pain was perfect. She'd no idea exactly what Jamie had done, but guessed he'd snagged her hair, probably on purpose when he blindfolded her.

"Green, Sir." They'd used the conventional safe words before, and she had no reason to think they'd want to change them. And she was happy, even if the thought of someone looking through the window and seeing her ass upwards and bare, worried her a bit. It also, if she were honest, excited her, and increased her arousal.

"Good. Stretch you arms out and grasp each wooden pole at the corner." Eva did as she was told and something which felt remarkably like the tie-backs for her kitchen curtains fastened her arms out wide to the corner of her Knole sofa. Was that why she'd been so sure she wanted that kind of seating? Whatever, it worked well. Her heart was beating faster than usual, and her mouth was dry as she waited to see what would happen next. The mantelpiece clock ticked off each second, and outside a pheasant called to its mate. Apart from that all she could hear was her own breathing.

Jamie, she had to assume it was him, and not A. N. Other, kicked her legs apart and then something cold touched each ankle, before her scarred ankle was wrapped in toweling and whatever it was fastened tightly with cord or some such thing to both ankles. Eva wriggled her toes and flexed her legs as best she could and discovered her feet were held about eighteen inches apart. What on earth had he used? Then she thought about the shape of whatever it was on her unbroken ankle. Her overlong fire irons?

"Such handy, everyday items you can find when you look," Jamie said, and stroked each globe of her ass. He pulled the back of her thong hard and up into the crack and did a seesaw movement with it. It really did feel like the proverbial cheese grater. Luckily he stopped before she decided it was sawing her in half.

His Boss, Her Dom, by Raven McAllan, is one of those short, sexy reads that leaves you with a smile on your face. I&#039;ll be the first to admit, Raven is one of my very favorite authors. I have a list, and remind me to share it with you. But Raven makes it right at the top. (Though sometimes I have to figure out what some of that Scottish slang is, luckily, I do so pretty well.) Evie, or Evita, is Jamie&#039;s boss. At work that is, but at Dommissima, all bets are off. When Jamie shows up as an undercover mail carrier at Evie&#039;s, she wonders if he recognizes her as the sub he played with. But for now it&#039;s all business as they have a car theif ring to catch. When Jamie returns from his route, Evie realizes that, yes, he does recognize his &quot;puss&quot;. What follows is a fast read with a hot, steamy, scene between the two of them and a satisfying wrap-up to the job, with a little help from a friend. I totally loved this book and can see myself reading it time and again. A keeper for sure!

Jamie and Eva work together where Eva is Jamie’s boss. However when they are alone Jamie is in charge and Eva is his submissive. They want to make their relationship work. The beginning of the story leaves you wanting to know more. By the end of the first chapter, I could not wait to finish the book. The author did a good job of drawing the reader in to her world. The world she created is very realistic. The pace of the story was very fast almost too fast. I kept feeling like I was missing something or this book was connected to a different book or part of a series. The main characters and the secondary characters were interesting and true to life. It was hard to get a good feel for the characters when the book is only 41 pages long. The point of view alternated between Eva and James, giving the reader a glimpse inside both characters. The main conflict of the story is the relationship between Eva and Jamie however there was another storyline about an investigation that was not real clear. The dialogue between the characters was genuine and distinctive. The characters voice matched not only the setting but fit their overall personality. The ending was a bit predictable but the author takes the reader on a wonderful journey. I hope we get to see these characters again in the future.

This was a great short story about Eva and Jamie. This is a must read!

What a fun read!! I do wish that there was more backstory on the characters, but for a short story, the author did a wonderful job creating a fun world

This was a wonderful short story! Sexy, steaming and oh so hot!!! Ms. McAllen is a fairly new author for me but every book of her&#039;s I&#039;ve read is awesome!! I will buy more of her books in the future.