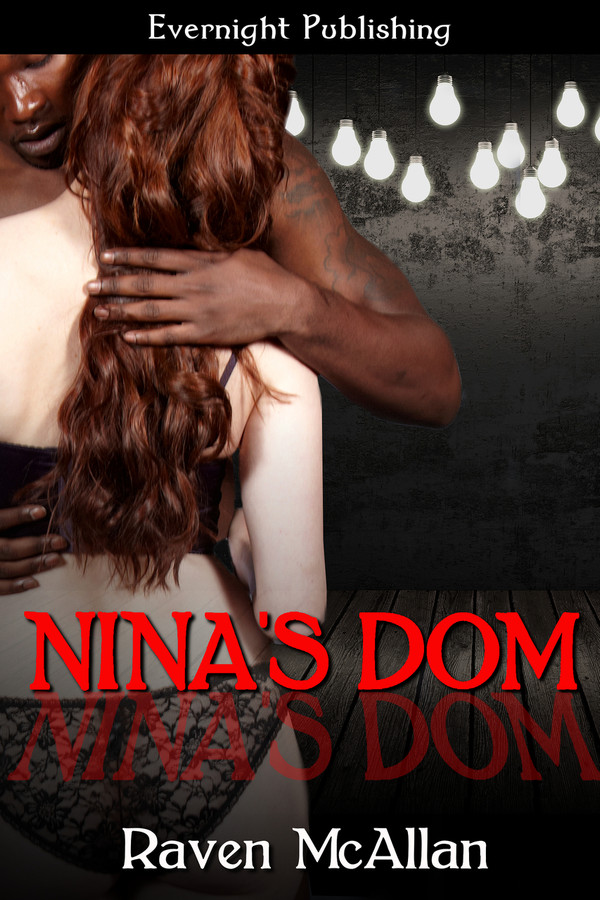 Nina Mack is no sub. So why then do all her senses scream at her to submit to the enigmatic Dominic Christopher?

When the two meet at her friend's hen party at Dommissimma, sparks fly. Their attraction is immediate and explosive, but how can Nina ever allow herself to enter into a relationship with a Dom?

Time will tell if these two can find their own Dom/sub relationship and reclaim happiness.

"Breathe, anima mia, watch the wax, see how it comes to caress you. Take the sting, let it into you, let it flow."

That was the only warning she had. Nina opened her eyes, and looked upward to see Nic, wax candle in one hand, tilt it so the flame stood at an angle from the candle. Then like a raindrop on a windowpane, a tiny teardrop gathered and slid towards her.

Nina couldn't take her eyes off it. For what seemed an aeon the wax dropped through the air, and then it kissed her skin.

She hissed as the kiss turned into a pain so intense she wanted to scream. How the hell could anyone say it was pleasure? She bit her lip to stop the cuss words spilling out. If it hadn't been the look of total absorption on Nic's face as he twisted his hand to increase the speed of the droplets and create a cobwebby pattern over her shoulders and the swell of her breasts, Nina knew damned well she'd have cried red. She held her breath to stop the pain spreading.

"Breathe, anima mia, let it fill you. Now." The last word was harsh. It broke into her panic, and Nina let out the breath she hadn't realized she was holding. The candle flame wavered as the whoosh of air she expelled reached it, and she looked at it in dismay. It couldn't go out, not now, not when…

When there was no pain. Just a radiant heat that spread over her skin, and dipped deep inside her. She smiled, licked her lips and cleared her throat, as Nic steadied the candle flame and stared down at her, his eyes watchful, his expression showing a tiny hint of vulnerability, and, she decided, pleading.

He smiled. "Topping from the bottom, anima mia?"

"In that case." He tilted the candle again.

She flew. Every sting, every tap of pain became pleasure. Nina had no idea when Nic ceased his twist and drip act with the candle, until she felt the ties on her arms and legs removed, and she was snuggled in a blanket on Nic's lap.

He stroked her hair as she sighed, and blinked a few times. The room was still in shadow, and silent. Any watchers had either left or were being very quiet.

Nina considered. Was good the right word? It seemed too mild for what she'd just experienced. Her body buzzed with tiny darts of pleasure, and her brain was fuzzy, as if she'd eaten too much, and drunk one glass too many. But in a perfect sated, complete way. As a sub when she had played before, she'd never ever felt so deeply. Never lost her sense of surroundings or what was happening. This time had been oh so different.

"I don't know that good is the right word, Sir." She yawned and put her hand over her mouth. She could sleep for a week if she had the chance. "Good is too weak. I've never felt like that. I floated, I felt, and I just let myself be." She hesitated, unsure of how to express that feeling of rightness. "Be part of the pleasure that the pain gave me. Nothing mattered except knowing you were giving me the experience. That my Sir wanted me to gain all of it and more. That I pleased my Sir."

Nic's arms tightened around her.

"Oh you pleased me, anima mia. More than that. You gave your all. What more could a Dom want but to see his pet, his partner, his anima mia fly?"

I’ve read several books by Raven McAllan and I have enjoyed every single one of them. So it was no surprise that I was totally satisfied after reading Nina’s Dom. The book had everything I could hope for in a romance – interesting characters and intriguing storyline to capture my mind and compelling emotions to grab my heart. Nina Mack believes that she is not a sub. She’s been there and done that and there isn’t a submissive bone in her body. Yet when she meets Dominic Christopher, she is immediately attracted to the Dom. Dominic hasn’t been interested in a D/s relationship ever since the death of his beloved wife. But there is something about bratty Nina that calls to him. Can he convince her that a relationship between them will work? My favorite part of Nina’s Dom was the characters. Both Nina and Dom came across as believable characters with realistic issues that can come up in the beginning of a new relationship. Nina was a confident woman but it was so normal for her to be insecure about how a relationship between Dom and her would compare to the one he had with his wife. Add into that concern, she wasn’t sure that she was even submissive enough to please him. I completely understood her thought process and didn’t find that her worries detracted from her independent nature. Watching Dom came to life for the first time since his wife’s death was so sweet. I got teary-eyed at his realization that he was actually interested in Nina. Then I was able to laugh, sometimes out loud, as Dom tried to convince Nina that she was submissive. Their interactions as they negotiated underwear were some of the funniest things I had read in a while. Ms. McAllan is always able to transport me from the mundane aspects of reality to a world in which hot, sex Doms exist. I find myself so engrossed in the story that I lose track of the dishes which have piled up or the bickering between kids. It’s one of the many reasons that I keep coming back to her stories. Her stories are pure escapism for me which I appreciate after a hectic day. Nina’s Dom is the fourth book in the Dommissimma series. I had not read the other books in the series and had no difficulty in understanding this book. But now that I have read Nina’s Dom and enjoyed it so much, I think I’m going to have to go back and read the others in the series.

Nina’s Dom is the fourth book in the Dommissimma series by Raven McAllan. While this book is part of a series, it can be read and enjoyed as a standalone novel. Nina Mack is not a sub or she does not think she is one. She has attempted to be a sub before and for whatever reason it does not work for her. She is mystified when she meets Dominic Christopher. Dominic Christopher is a Dom who has lost interest in BDSM after the death of this wife. That is until he meets Nina who seems to spark his inner Dom. Now Dominic has to convince Nina to give him a try. The connection between Dominic and Nina is blistering. It’s easy to see the attraction that Dominic and Nina have for each other. I enjoyed seeing Dominic embrace a part of himself that he left behind when his wife died. The sex scenes were scorching. I found this book well written with an interesting plot. The main characters and the secondary characters were all great. I also enjoyed seeing characters from the past books in the series make an appearance in this book. The ending was a bit predictable but I enjoyed seeing Dominic and Nina overcome their respective pasts to move forward. Overall, I loved this book.