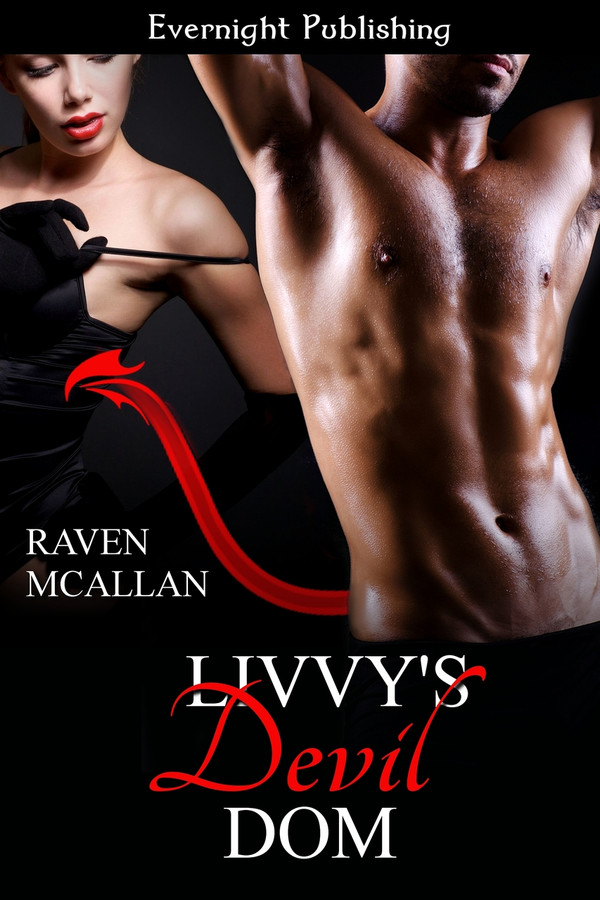 When Livvy releases the devil within, he comes with sex that is out of this world—and the small matter of a life or death decision. As for Sael, he has never met a more ornery or sexy as hell human than formerly-vanilla teacher, Livvy.

She belongs to him, for now, and this devil Dom will try everything in his power to ensure she stays his.

He needs her complete submission to survive, but even if she gives it, will it be a happy-ever-after or hell on earth?

Her touch brought his fangs out, and his tail swished in an arc. To her surprise, a neat but vicious set of horns appeared on either side of his head. Shiny and dark, they made her tremble. It wasn't pure fear, Livvy noticed, but tempered with excitement.

"You bring out my Devil Within. In a good way. You complete me. And it saves me explaining that these"—he touched his horns—"will appear."

Livvy stared. Then, as a credit to her own temerity, ran her fingers over them. Velvet, rock hard velvet.

"What do you do with them?" she asked.

He'd shown her—almost. His head dipped toward her pussy. Then he stopped and rubbed one velvet tip over her clit.

"Show me." She stared up at him and hoped the trust and interest she had were obvious in her expression. "Show me what you use them for. I'm guessing it’s not for hoopla or quoits."

Sael sniggered. "Not unless your kink goes that way. I er, well…" His voice trailed off. Livvy rolled her eyes.

"You reckon? Let me show you." His voice was gravelly, with added heat. "Ah now, pet, feel the heat." He got up onto his knees, lifted her legs to stretch out each side of him and bent his head. The fine, short, and curly hairs tickled her skin, and Livvy jumped. It didn't tickle, exactly, but it did heighten her arousal. Then Sael stroked her clit with the tip and let it slide over her soft skin toward the entrance to her channel. Livvy wriggled and gasped as a wave of fire swept through her.

"It's hot and heat, and it throbs." She stopped moving as he edged the horn oh so gently inside her. Her muscles tensed, and he paled. Did he think she might say red, or even worse, crumble? There was no chance. She'd got this far, and Livvy didn't intention to renege.

She began a tiny clench and release move, over and over again. "I want more."

"Dammit, do you know how bloody difficult it is not to thrust, take, and force the pace?" He grunted the words. "You know the expression to the hilt?"

Why was he talking about stupid expressions and not filling her to the hilt? Ah…

He grinned. "Did you know the opposite end to the tip of a Devil's horn is called the hilt?" Then he pushed.

Tiny stings slid over the inner walls of her pussy, as his horn slid “to the hilt” and back. Over and over those little stabs hit her and tingles spiraled from them. Wave after wave of fiery heat pulsed through her as he moved. Livvy opened her eyes a slit, and watched in awe as tiny shards of light pulsed around his head, dancing up and down in time to their sexual beat. The sensations were so different from when he fucked her with his cock or finger. Every so often a gush of her arousal slipped past his horn to coat her legs. Then he shuddered and groaned.

"Liv-love, I can't help this. Take a deep breath, and hold me tight inside. Because if my horn makes me come, my cock will spill all over us, and you'll have to lick it off me and me off you. We'll defer on the sheets."

What the hell is he rambling on about?  Being impaled on a hot throbbing horn didn't add to the ability to think coherently. She didn't bother to answer him or try to work out how his cock was so agile. She just clenched her inner muscles and refused to let him go.

Livvy floated, and saw bright colored lights. She was only dimly aware of Seal slumping next to her before he gathered her into his arms and let his other horn stroke over her neck.

She snuggled into him, and pressed her lips to his nipple. He wriggled, and she giggled. "That's not an invitation for the next round. That's a thank you."

"Not for a few minutes anyway."

She looked up at him, and he laughed. "Ah, pet, you are so easy to read at times. Now rest there until I run a bath. Um you're not too sore, are you? I got a bit carried away and didn't temper my pulsars."

"Is that what it's called?"

"Thingies? Thingies, sheesh, woman." He laughed so hard he nearly fell off the bed. Livvy was oh so tempted to give him a helping hand.

Jeeze. I have no idea where to start with this book. I am so impressed by it I can&#039;t stop thinking about it. The world that Ms. Raven has created is beyond amazing, it could totally be true and we could never know until &#039;our time.&#039; I thought I had it all figured out. I thought I knew what was going to happen but BAM. Ms. Raven blew my mind with how amazing this story was. I was balling like a baby at the ending and it was such a perfect ending that I didn&#039;t expect. This book has so many twists and turns I found myself hoping for a happy ending for Liv. The most interesting thing about this book is the sex. It&#039;s a BDSM based book and yet there isn&#039;t that much. It&#039;s more about the connection they share and the inner love. Now don&#039;t get me wrong this story is HOT and so much so that you may need a change of clothing because Mr. Devil Dom takes control perfectly... Or should I say Sir Devil Dom I highly recommend this book!

Livvy&#039;s Devil Dom is a quick read that offers a lot of things to love. I&#039;ve always enjoyed Raven&#039;s dialogue and she wrote some stellar banter here. Raven also has a talent for weaving a story line in a way to keep you guessing what will happen and that&#039;s definitely the case here. The story is definitely unique and will keep you on your toes. There&#039;s some good hot lovin&#039; too. Livvy has one hot devil Dom. :) NOTE: I received a copy of this book in exchange for my honest and fair review