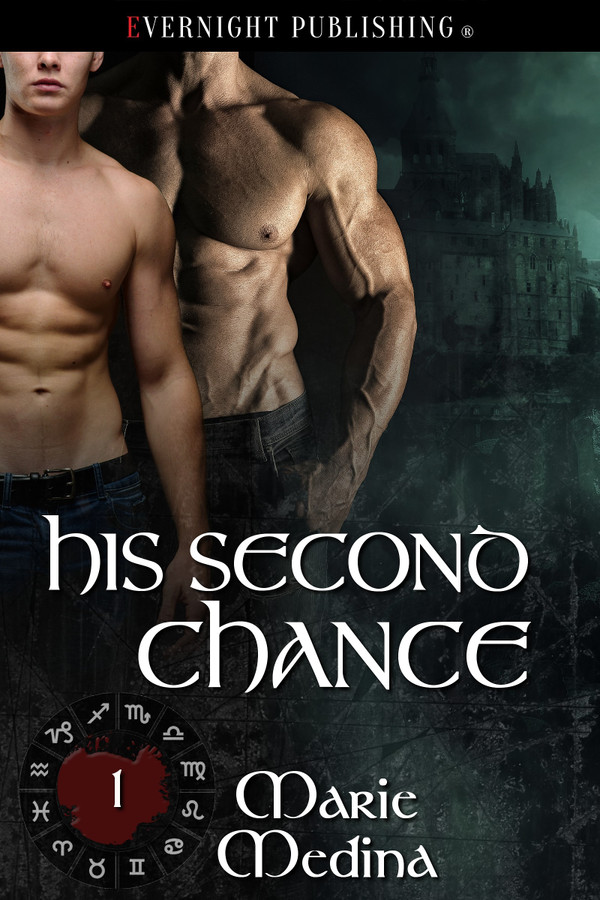 The Year of Blood, 1

When Petyr had to choose between the fated mate he hardly knew and his pregnant former lover, he told himself rejecting Rollo was his only option. Even when life brought him more heartache, he felt it was all worth it when he looked into his children’s eyes.

Rollo never forgot about his fated mate. When Petyr shows up on his doorstep in the middle of the night, there’s no time for joy as Rollo finds out all his mate has been through since they parted. Petyr is dying, and though Rollo’s blood could save him, he asks for nothing more than Rollo’s promise to care for his children.

But this time, Rollo isn’t going to give up. The gods have given them both a second chance, and he’s going to prove that to his mate.

Rollo sat on the bed. He laid the cool cloth over Petyr’s forehead and held his hand.

“You have to wake up,” Rollo said quietly. “Adam and Ellie need you. And so do I.” He stared at their joined hands. “I tried to forget about you, but I couldn’t. The gods aren’t always fair, but you dying like this would be downright cruel.”

Petyr seemed to take a deeper breath, and Rollo leaned closer. Yet nothing happened. Rollo actually closed his eyes and started praying. His chest constricted as he opened his eyes again and lifted Petyr’s hand to kiss it.

Petyr’s fingers flexed in his, and Rollo looked up to see Petyr’s eyes opening. They seemed unfocused at first, but Petyr fixed his gaze on Rollo. “My head. It’s pounding,” Petyr said softly.

“You need to drink.” The decanter by the bed stood empty, so Rollo bit his own wrist. “You may find this distasteful, but—”

Rollo cut himself off as Petyr grabbed his wrist and latched onto it. He tried to remain calm but struggled. Having his mate drink from him so aggressively caused his body to stir. When Petyr let go and fell back on the bed, Rollo licked the wound to close it and then resumed wiping Petyr’s face, cleaning the small amount of blood from his chin.

Rollo said, “It may not be fair to say this now, but we must talk about me turning you. You seemed so much stronger last night. I never would’ve expected to find you like this today.”

Petyr’s breathing seemed labored, but he looked much better as he sat up. “I probably didn’t drink enough last night.”

Rollo wasn’t in the mood to hear excuses. He took Petyr by the back of the head and made the man look him in the eye. “Your children need you. This isn’t about me.”

A tear rolled down Petyr’s cheek, and he swiped at it as he pulled away. “I need more time to think about it.”

“If that’s your answer, fine, but I’m not leaving your side from now on. Not unless someone else is with you.”

Petyr lowered his gaze. “Your cock is hard, and your eyes are black.”

“I know, but that’s my problem.” Rollo grabbed at an extra pillow and put it over his lap. “My mate was just drinking from me moments ago. Quite aggressively. Hard to fight it.” He took a deep breath and let it out slowly, wondering what Petyr was thinking. “What can I do to convince you that my help doesn’t come at a price?”

Footsteps sounded, and Petyr looked away.

Helen came back in, and Petyr flushed as she rushed over to him. “Glad to see you’ve revived without this.” She waved a bottle of smelling salts and set it down on the dresser. She brought some cloths to the bed, taking the one in Rollo’s hand. She looked at the blood on it. “You had a good drink? Feel better?”

Helen looked questioningly at Rollo. “Some broth, perhaps? Something else?” Her gaze went back to Petyr.

“Broth would be good. A bit of bread.” Petyr lay back again. “My stomach’s unsettled, but it won’t hurt to try.”

“I’ll bring up a tray then. I’ve already got a pot going.” She hurried out of the room after giving Rollo a pointed glance.

After a few seconds of silence, Rollo said, “I know it’s a big decision, but time might be running out. I did some reading last night, and blood diseases can be unpredictable.”

“The doctors told me that.” Petyr shifted against the pillows and rubbed his forehead. “My friends, the few who know about you, assumed I was coming here for you to turn me. I didn’t tell many people about my illness. Didn’t want a big fuss. Just sold everything and packed up and left. I know now how dangerous that was.”

“Don’t dwell on it. You’re here and safe.” He hesitated before he said, “And I can heal you if you’ll let me.”

Petyr’s response surprised him. “How do vampires just accept it? The mate they’re given. How do you know if you like me for myself or because I’m your mate?”

“I’ve known vampires who rejected their mates. Who’ve been rejected by their mates. Fated mates who were very unhappy. Some couples move much too fast. That’s why I wasn’t very aggressive. I wanted us to get to know each other. Especially since you’d never had a male lover.” He licked his lips. “Every time we saw each other, I wanted to kiss you. But I held back.” He took Petyr’s hand. “I regretted it. I admired you for standing by Nora because you’d gotten her pregnant. Admired your priorities. But I regretted not kissing you. Not making it clearer how much I wanted you to accept me. Not suggesting that you didn’t have to marry Nora to take care of her and…” He sighed. “I’m tired of regrets.”

Rollo pushed the pillow on his lap aside and moved closer, cupping Petyr’s cheek. Though his eyes went wide, Petyr didn’t pull away as Rollo kissed him.

In a historical world where years are given names, we get the opportunity to see a second chance in motion. Petyr met his fated vampire mate but did the right thing when Nora told him she was pregnant. Due to unforeseen circumstances, Petyr is left holding two babies when he finds out he is ill himself. Thinking only of his children, he returns to Rollo to ask for help. Rollo is prepared to do more than help the children and makes no bones about wanting Petyr to return to him. This was a lovely read with more emphasis on the relationship between these two rather than just a tumultuous roll in the hay. There isn’t much ‘detail’ here which seems absolutely perfect for this story. Time moves on so you don’t feel like Rollo and Petyr are rushing into things. I thoroughly enjoyed the world-building in here and the characters were a delight. I would love to read more in this series, and I sincerely hope Jonah has his HEA. A wonderful, gentle read that I absolutely recommend.

I have read a lot of paranormal books, especially fated mates, but this one is just a bit different than the others. This is a vampire fated mate read with a twist. Petyr is a human. Though having human/vampire matings is nothing unusual, he never expected to have a vampire mate himself. The fact that his fated mate is a male is what really throws Petyr for a loop. When Rollo suddenly meets his mate, he is thrilled. Petyr is everything he has ever wanted in a partner, but the fact that he is a man is kind of surprising. More surprising is the fact that Petyr is engaged to be married to a woman named Nora. Though Petyr and Nora break off their engagement, things do not work out between Rollo and Petyr. They spend time starting to get to know each other, and things might have worked out between them, but when Nora finds out she is pregnant, Petyr has to do right by her. So he refuses the mating between him and Rollo and marries Nora instead. It is not easy to walk away from his mate but Rollo knows he has no choice. A little over a year later Rollo is shocked when Petyr and his twins show up at his home unexpectedly. Sadly Nora passed away three months after the twins were born. Yet he cannot figure out why, after all this time, Petyr is at his home. But he is not left wondering for long before he finds out that Petyr is dying. Rollo knows he can save Petyr but he does not seem to want that. Can Rollo change his mind? Will Rollo and Petyr have a second chance to have what they missed out on? Is fate purposely bringing these two back together since fate had other plans for Petyr when they first met? This was a great read. It is not your conventional “mates meet and fall in love” type of read but it is a very interesting read regardless. I really enjoyed this book and if there are more books to come in this series, then I will be reading them as well!

His Wild Wolf by Marie Medina

His Defiant Leopard by Marie Medina