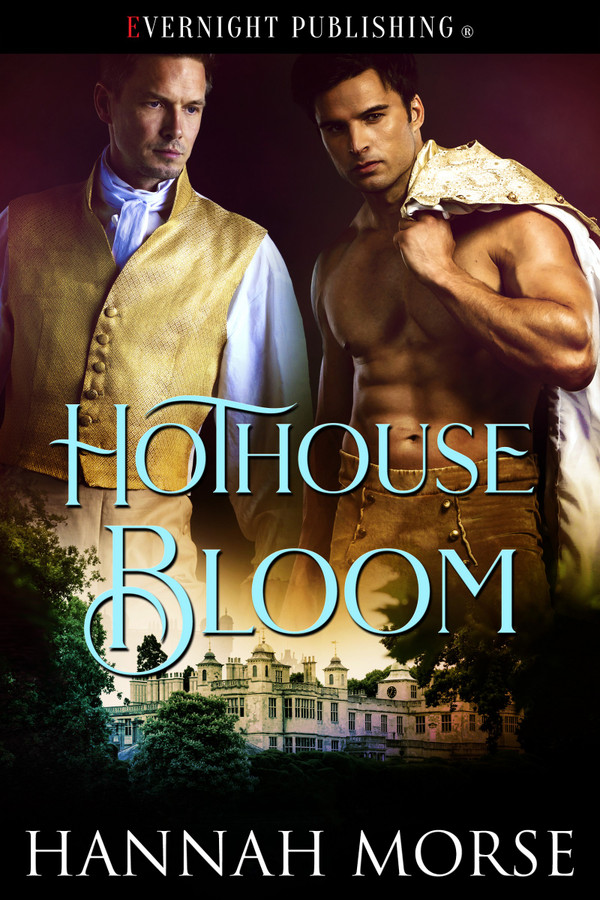 Noah Tenbey’s body and soul were torn asunder during a cavalry charge at the battle of Waterloo. A year later he’s still suffering. Fearful, his family calls in Dr. James Byrd from London, who not only helps Noah with his injuries, he also brings Noah’s heart back to life. But what life can James, the bastard son of an Earl, and Noah have together when all of society doesn’t see them as they truly are? Will they find a way to keep their love blooming, or will it wither on the vine?

Setting the last seed pot in the wheelbarrow with a flourish, James marched back to the greenhouse. He yanked open the door, pushing the pots inside with determination.

Startled, James dropped the handles of the wheelbarrow. It thudded on the stone floor, the pots clattering together. He blinked at Noah, who was sitting on the hard bricks that formed a platform in the center of the greenhouse, cane in hand. Most of his hair had escaped its queue, and his eyes were pinched like he was in pain. Probably from sitting on the damned bricks.

Forget the greenhouse being a hell of a lot of work, somehow James was supposed to train a nobleman. It’d be easier to get a horse to talk than convince a rich man to do what was asked of him.

James made a show of hefting the wheelbarrow back up and pushing it to the low tables at the back of the greenhouse. He lifted out the pots and set them in neat rows.

After a few moments, the tap on a cane on the flagstones and the tread of booted feet sounded. That couldn’t be comfortable with how stiff the man must be.

“Excuse me, I was speaking to you.” The words were clipped. The good gentleman was upset. How delightful.

James shifted on his stool to face Noah, which might have been a mistake because Noah, despite his lips being pulled into their perpetual scowl, was very fetching when viewed close up. There was a slight scar, hardly visible, that faintly marred his lush lower lip—an old hurt James wouldn’t mind kissing better. If such a thing wouldn’t earn him a home in the gutters of London.

He cleared his throat. “It was more of a pronouncement, actually. And I knew where I was, so I continued about my business. Far be it for me to intrude on your admiration of leafless trees.”

“So I’ve been told many times.”

Besides the pure pleasure when reading historical mm stories there is also the pain, it&#039;s painful to know how very careful they had to be, for fear of their lives. They cannot exclaim their love, or celebrate it. But this tale is 90% sweet and romantic, James is a tender, gentle giant hired to be Noah&#039;s doctor, to help him heal from his wounds. Noah starts off crabby and private but he is slowly drawn to the good doctors charms. A truly gorgeous read, a little angsty in places but still a very nice read. This follows a previous story involving Noah&#039;s brother Morgan, which I had read, but you don&#039;t need to have read it first, this is more or less a stand alone although Morgan is mentioned now and then.

Noah got a bad leg injury in the war. He also lost his lover in that war. Some times he&#039;s in so much pain he can&#039;t move and feels he can never have a future with anyone. Dr. James Byrd comes into his life and helps him control his pain and gives him a reason for a future. I really enjoyed this book.

I loved this story. I don&#039;t read historical romance very often, but this story sounded so intriguing that I had to pick it up. And I am so glad I did. This is such an emotional and beautiful read. Noah and James are the perfect pair. James was exactly what Noah needed- not just physically because of his injury, but emotionally, too. Very well written and well paced. It&#039;s the first book I&#039;ve read by this author and I would read more of her work. Excellent! 5 stars.

Grab this book today, no drop what you are doing and pick this book up. I normally have to be in a mood to read Historical Romance, but this was an ARC read I picked up for the author. Noah and James are fantastic. I was hooked from page one and hated having to put it down to work or eat. A great friend of mine was reading the book at the same time and we chatted about how it was breaking our hearts as we cried along with the characters as the story progressed. This is a story of the healing power of love. You don’t want to miss it.

I don&#039;t know where to start with my review. This book was so amazing. Hannah wrote a love story that made me feel happy and sad. I cried along with Noah and James as they found each other. She has a remarkable skill to pull you into her book from the start. I couldn&#039;t put this book down once I started reading it. Noah is a hard-headed ex soldier with a chip on his shoulder and won&#039;t let anyone in to help him. James is a physician who can see through the shell and wants to help Noah with more than just the pain he is feeling physically. From page one, you can&#039;t help but love Noah and yet want to throttle him at the same time. His family plots a scheme that leaves his heart and his body healing. James was just what Noah needed. Breaking through that tough exterior, they find each other and a love that makes you cry and laugh with them through each moment.

A wonderfully, emotional and sexy story. Hannah has quickly become a 1-click favorite on mine, no matter what she writes!