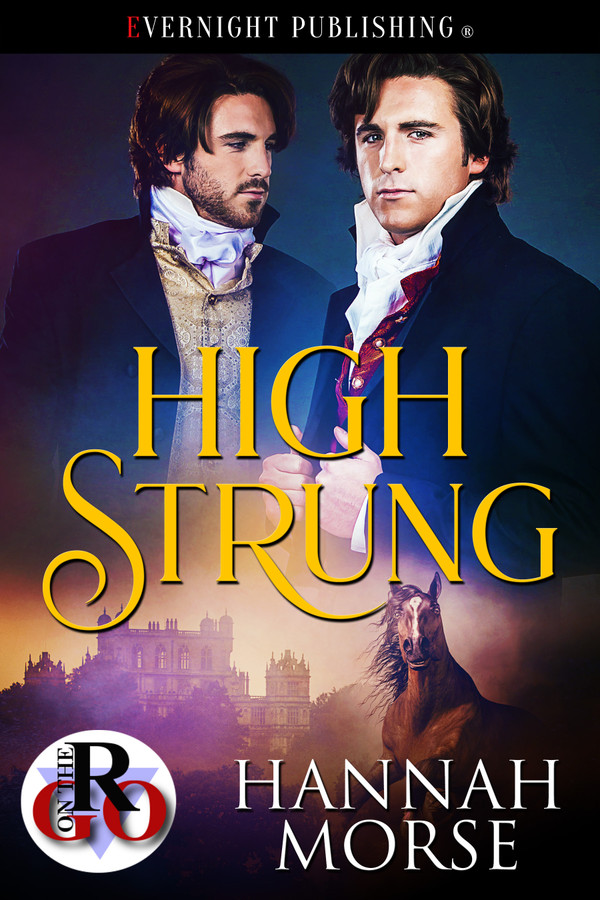 Morgan Tenbey, third son of Viscount Ramsbury, is called home to the family’s country estate. His father declares that it’s time to set aside his love of fast horses, gambling, and high fashion in order to take a position as vicar. Unable to imagine a life outside of London, Morgan believes he'll be miserable forever, until he meets Davie, a groom in the family stables.

Davie fled his last post in Scotland after his employer discovered him kissing the wrong person, but history seems doomed to repeat itself when Davie falls for Morgan. Can two people who feel like they’ll never belong find their way to a future together?

The west pasture had a few distant horses grazing, bright splashes of chestnut and white against the green grass. Neat hedgerows marched around the edges of the pasture, only broken here and there by stone fencing. Morgan had been worried about tracking down Davie, who could have been anywhere in the field, but for once, Morgan’s luck held.

The closest gate hung open, one post missing. Davie, his red curls gilded by the sunlight—as if the fellow needed an extra layer of pretty—stood with his hands on his hips, inspecting the gate. His braces dangled down beside his legs, and his shirt was untucked with the collar hanging open. The sleeves were pushed up above Davie’s elbows, revealing muscled forearms dusted with dark auburn hair.

Davie bent over, his trousers pulling tight against his rear.

Morgan knew quite a bit of scripture that he should probably be reciting at the moment, but for the life of him, he couldn’t remember a lick of it. Honestly, he hadn’t come out here to be tempted.

With a grunt, Davie hefted a new fence post. He wrestled it over to the hole and dropped it in. The man’s shoulders were a work of art. At his sides, Morgan’s hands curled into fists. No touching allowed. His lower lip tried to creep out. He had to force himself not to pout like a spoiled toddler.

Tilting his head back, Davie groaned and rolled his shoulders. He grabbed the tails of his shirt and pulled them up, wiping sweat from his face. A sliver of his back was revealed. The skin, pale and smooth, practically begged to be caressed.

Morgan’s nails dug into his palms. “Excuse me,” he called. At the rate this was going, the fellow would be opening his trousers to tug at himself before noticing Morgan was standing a few feet away.

Davie spun, dropping his shirt. There was a startled bark from the long grass, and the little terrier from the night before poked her head out. She took one look at Morgan and promptly disappeared back into her bower. He must not be very threatening.

“Er, hello,” Davie said, tugging at his forelock. “Is Handsome all right? Did you need me to saddle him?” The lilt of his voice complemented the bucolic scene around them, like the man was part of the landscape itself. Drat him. And did he have to be so amiable?

Morgan straightened to his full height. He was still a head shorter than Davie, though the hat alleviated some of the difference. It didn’t matter anyway. Morgan had never minded a man being a bit taller and broader than himself. “There’s no way to put too fine a point on this,” he started. “I suppose I might as well just come out and say it.”

One red eyebrow lifted. “Please do.”

Davie’s other brow lifted. “Ah, right. May I ask why?”

Morgan heaved a sigh. “Your silence? Not running to my father and telling him about my sins?”

This was impossible. “Do you want me to spell it out, so you have the words to send me to the gallows with?” Morgan sputtered. “Shall I describe exactly what I was thinking, and you can toss that in there too? Maybe put it in writing?”

“Wait.” Davie rubbed his temple. “Is this about—” He cut off his words and craned his neck as if looking for anyone spying on them from the shrubbery.

Davie still cut his eyes left and right again, then drew closer to Morgan. “That’s a very lovely outfit you’re wearing. It looks good on you.”

“Everything looks good on me.”

Davie’s adam’s apple did an interesting bob. “Look, is this about you almost kissing me? Last night?”

“No, all the other times.” Morgan winced at Davie’s blank look. “Yes, last night. I can pay you a hundred pounds to not breathe a word of it to anyone. Not Ramsbury, and not to the magistrate. Don’t even confess it to the vicar.”

A slow smile spread over Davie’s face and his eyes twinkled. “Aren’t you a vicar? Or you will be, soon enough. Should I confess it to you?”

“Are you teasing me?” Morgan had no idea how to respond. Actually, he knew exactly how he wanted to respond, kissing that smug smile right off the bastard’s lips.

“A little, but don’t fret, I’m not about to set my tongue wagging. So you can take yourself back to the manor and do whatever it is you do. Get your shirts starched or the like.” Davie gave Morgan a sharp nod before turning to the gate.

Had he just been dismissed? How rude.

An adorably sweet yet steamy read rolled into one. A wonderful story by a 1-click author for me!

What an adorably sweet romance! Witty, fun, and with just enough steamy scenes. I loved everything about this story.

A fantastic story and a speedy read! Morgan, ever the dramatic one, is sure he&#039;ll never be happy now that he&#039;s being &quot;exiled&quot; to the country. Davie is a huge sweetheart with a heart so big he adopts every stray he comes across, including the recently arrived son of his employer. I love how well they complement one another, and how clear their affection shines through the whole story. I was rooting for them from page 1! Can&#039;t wait to see what&#039;s next for this series.