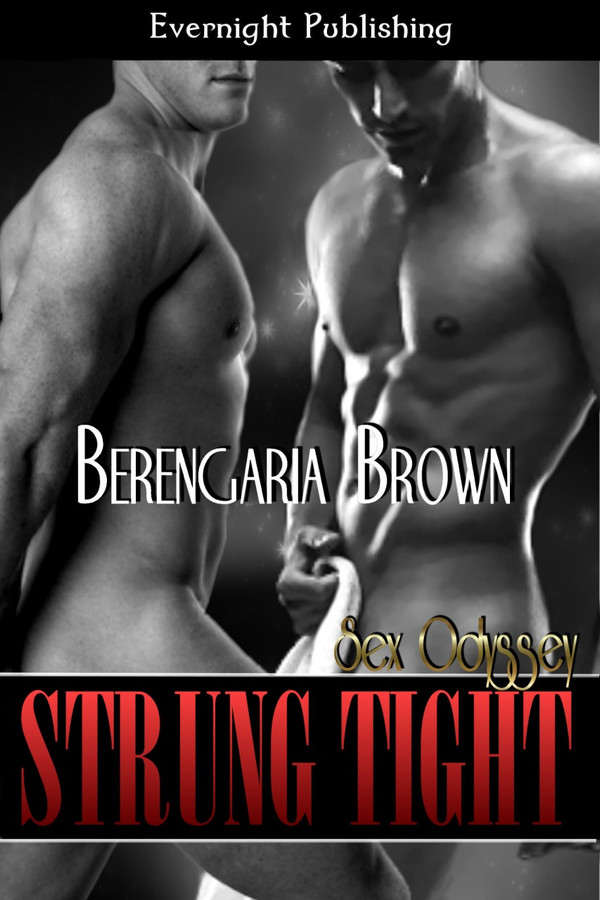 After a scorching night of sex and sin, two men need to make a decision in their lives.

Jeff works nights playing guitar at a strip club. Pete works days as a tour guide. Neither man is happy and both search for fulfillment. Can they find it in each other’s arms?

While the sex is great, and the orgasms body shaking, how can their relationship survive if they’re separated by time? Surrendering to wild emotions is easy. Real life is messy but the fight for love is worth it.

The two men gazed into each other's eyes. Lust exploded like a visible force, and Jeff took two hurried paces to close the gap between them. Pete stepped into Jeff's embrace and wrapped his arms around the taller man's waist, lifting his face for a kiss.

Jeff gently pressed his lips to Pete's, then swiped his tongue along the seam of the blond's mouth. He opened and Jeff slid his tongue inside, enjoying Pete's taste of coffee and mints and something spicy.

They didn't break the kiss until both of them were breathless. Even then Jeff nibbled on Pete's lower lip and ran his hands up and down the man's spine, wanting to get closer, needing to be inside him, right now, but not wanting to seem to be rushing or coercing the blond.

Jeff pulled Pete's shirt up, stroking the soft skin, loving the feel of muscles and bones and sinews moving under his touch. “Take it off,” he whispered hoarsely.

“You too. I liked the look of your chest in the club.”

They broke apart a few inches and shed their shirts. Jeff took Pete's hand and led him to the end of the trailer where he sank onto the sofa and pulled Pete onto his lap. Teasingly, Pete rubbed his ass across Jeff's cock, making him groan. “If you keep that up I'll get zipper burn!”

Pete stood up. “Well, take your pants off. I'd like to see your cock.”

“Together. We'll take them off together,” replied Jeff, standing as well.

It took Jeff a few minutes to get his boots and socks off and Pete watched him. Pete had bare feet inside his loafers, so that part of the program had taken him all of one second.

They stood facing each other, hands on belts, and, like the dancers in the strip club, they slowly undid their belts, pulled them out of the loops, dropped them to the floor, then unzipped.

Pete remained still and watched as Jeff spread the fly of his jeans wide, displaying dark blue briefs. He put his hands on his hips and nodded to Pete.

Pete's pants were a lot looser than the jeans Jeff was wearing. Just as he'd hoped, when Pete opened them, the pants slid to the floor, leaving him in his tighty whiteys.

Jeff pushed his jeans down his legs and stepped out of them, then hooked a finger in one side of his briefs. Pete mirrored his actions, stepping out of his pants and sliding the underwear down an inch or two on one side.

Turning forty-five degrees, Jeff slid his briefs off his butt, leaving it exposed, but his cock covered. He turned his head over his shoulder, watching to see what Pete would do next.

Pete turned his back to him, dropped his underwear to the floor, pushed his ass out, and bent his knees, displaying his puckered rosette for Jeff. It was the sexiest ass Jeff had ever seen, the hole a deep pink, beckoning him to sink his aching dick in it. Below the yummy anus, in the gap between Pete's legs, his balls hung, and Jeff had to lick his lips and swallow hard, they looked so delicious. He couldn't wait to get them in his mouth.

But wait? Was that the edge of a tattoo showing on the inside of Pete's thigh? God! What other treasures was the blond hiding? And he had a little secret yet to display himself. “Turn around,” he ordered, hoping not to sound as needy as he felt.

“Drop your pants and we'll turn together,” suggested Pete, his voice alive with laughter.

Jeff turned his back on the other man, pulled off his underwear, and looked over a shoulder, resting one hand lightly across his hot, hard cock. Pete had straightened up and was looking across at him.

Jeff couldn't help a huge grin spreading across his face. This man was perfect for him. Hell, he hadn't had this much fun in a year, and they weren't even in bed yet!

“Three!” they both called together turning to face each other.

It was a tattoo! A swirling tribal pattern, spiraling and twisting and turning from the upper inside of Pete's left thigh, across his groin and lower belly, to just below his bellybutton. It was a maze of black and blue and red lines, an intricate, yet clean, pattern that drew his gaze unerring to the man's cock. And what a beautiful cock it was. Red and thick and long, pre-cum already beading in the slit of a fat, flat head he couldn't wait to suck. “Very nice,” he managed to say.

Pete's gaze was glued to Jeff's cock. He didn't even look up when he said, “I've always wondered what one of those would feel like inside me. It's a Prince Albert piercing isn't it? Damn but I've hit the jackpot tonight.”

“I aim to make sure you'll come harder than you've ever come before,” said Jeff, pulling Pete into his arms and rubbing their cocks together.

Pete lifted his face to be kissed, wrapping his arms around Jeff's waist and rubbing his nipples across Jeff's chest. When they broke apart from kissing, Pete whispered, “I don't think I can wait any longer. I need you inside me, now.”

Lonely nights and an even lonelier heart are making Jeff a very sad boy. He misses the feeling of having someone to care about and come home to, and yes, he misses the intimacy. The tour guide thing is not turning out to be the grand adventure Pete was hoping for when he quit his desk job. He needs the money, and he needs to feel useful, but what he does not need is a bunch of German tourists making his life hell. Playing guitar in a strip joint would make most men happy as a clam, but Jeff’s tastes do not run towards the bounty of naked women dancing on stage. They do, however, fit the beautiful blonde in the back of the room. Jeff and Pete eye each other up, and within moments they know this could be the beginning of something wonderful. Jeff wants more than anything to make Pete happy, but if Pete cannot find a job soon, he fears Pete will have to move on. Pete’s job prospects are slim in this tiny little tourist town, but it quickly becomes clear that if he has to leave Resort City, he will be leaving his heart behind as well. Jeff and Pete’s fiery passion is way too hard to resist, so why try? They are hot, and they easily put the reader smack dab in the middle of all that sexy man love. I really like how Ms. Brown can put you right into the heart of her characters from page one. They are always fun, sexy, and just the right fit for an afternoon of delicious reading.