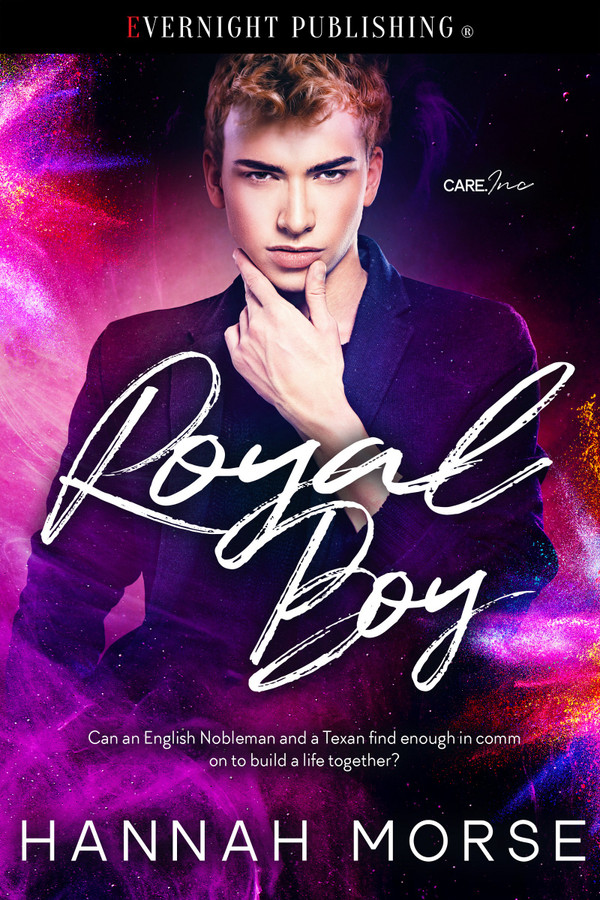 Can an English Nobleman and a Texan find enough in common to build a life together?

Duke George Corbyn commands both wealth and power. An attack before he flies to the states leads him to getting an American bodyguard. George is nonplussed. A babysitter is a no, but a Daddy would be a yes, because what nobody knows is that under his posh exterior, he’s a little longing for a Daddy.

When drill sergeant Aaron Anderson needed a job, he was recruited into CARE, Inc.—a security company that gave him a new start as a bodyguard. Assigned to watch over George, Aaron is not only attracted to the man, but also very aware that Georgie needs a firm hand to guide him. And that hand probably needs to be on the brat’s behind.

When the attacker returns, they learn more is at stake than just their hearts.

Aaron stored that away. Place name title, check. He shook Lettie’s hand, then discreetly stretched his fingers out at his side after she freed him from her crushing grip. “I’m from Texas, ma’am. That’s pretty American.”

She waved a hand. “I’ve been assured that you’re the best.” Her tone suggested she didn’t quite believe him. The suit was working even better than expected. He should have added a cowboy hat. “And your security plans do seem to be well thought out and comprehensive.”

Lettie looked like she was praying for a moment. If she’d been hoping for the floor to swallow him, it didn’t happen.

“Lord Eastshire is not thrilled with this arrangement,” Lettie said. “But after the incident last week, we didn’t want him wandering alone around the States where anything could happen.” She made it sound like wild bears or roving packs of revolutionary soldiers might jump out from behind the nearest potted plant.

Lettie studied Aaron, then nodded once briskly and led him to a set of double doors. She pushed them open.

For a moment the view dazzled Aaron. Seattle stretched around them, framed by the floor-to-ceiling windows. Those would have been more of an issue if any assassin wouldn’t have needed a helicopter and wind that cooperated to have any chance of hitting someone in the suite. It might be bulletproof glass. He’d have to ask.

Out on Puget Sound, ferries left white water in their wake. The waves were so far below it was impossible to see them moving.

“Lord Eastshire,” Lettie said, her tone very different from the one she’d used on Aaron. The amount of deference in her voice was impressive. She must really be into the almost-royalty thing.

Aaron dragged his gaze away from the view, only to be stopped in his tracks by an even more gorgeous sight.

The kid was standing in front of a blank television screen, pouting, with his arms crossed. The photos hadn’t done him justice. Lord Eastshire looked expensive, from the cut of his dove-gray dress shirt and crisp trousers to the glass of booze in his hand. Which he had no business drinking—it was barely past noon.

Georgie—there was no way Aaron was going to ever be able to call him Lord such and such—had a lower lip to die for. Its sweet, lush plumpness contrasted well with his squared-off jaw and an absurd amount of golden curls. It pushed all of Aaron’s buttons at once. Not what he looked for in a client.

Swallowing down any awkwardness, Aaron marched over to him and stuck out a hand. “Howdy, son, it’s nice to meet you. I’m fixin’ to be your bodyguard, so no need to stand on formality.”

Georgie made a face at Aaron’s hand before gingerly taking it. The kid’s long, slim fingers were soft. “It’s nice to meet you,” he said in a tone that was anything but nice. Dropping Aaron’s hand, Georgie edged around him. “Lettie, this won’t work, I’m afraid. Please get this bloke out of my penthouse.”

Aaron almost expected Lettie to bow and do as told, but her face remained blank. “I’m sorry, sir. As you know, Mr. Anderson was hired from higher up. I’m afraid he has to stay,” she said before departing.

He put on a wide grin. “What the little lady said. Now how about you tell me what you’ve got planned in Vegas? Are you going to be hitting up the clubs? Bringing guys home?” He winked at Georgie, whose decidedly pale complexion was working its way toward being as white as a sheet.

“I,” Georgie said, the single word dripping with importance, “am not here for that sort of thing. I’ll be spearheading an initiative on micro-loans in developing nations, as well as being expected to attend every single bloody event as a guest of honor. I suggest you worry about making sure nothing happens at those functions, not about what I do to blow off steam.”

There was anger in the words, but it wasn’t reaching Georgie’s eyes. Aaron almost forgot himself and offered a hug. The kid obviously needed one, and the blow-off-steam part had been accompanied by his gaze darting away. Whatever he was into, dragging random guys home to fuck didn’t seem to be a part of it. Which was good in more ways than one. Aaron didn’t entirely want to think about what kind of torture it’d be standing outside this boy’s bedroom while he got hot and heavy with some Mr. Right Now.

Georgie blew out a breath that made the curls over his forehead shift and fall further into his eyes. “Are you going to be up my arse for this entire bloody trip?”

With the Boys in the Band by Marie Medina