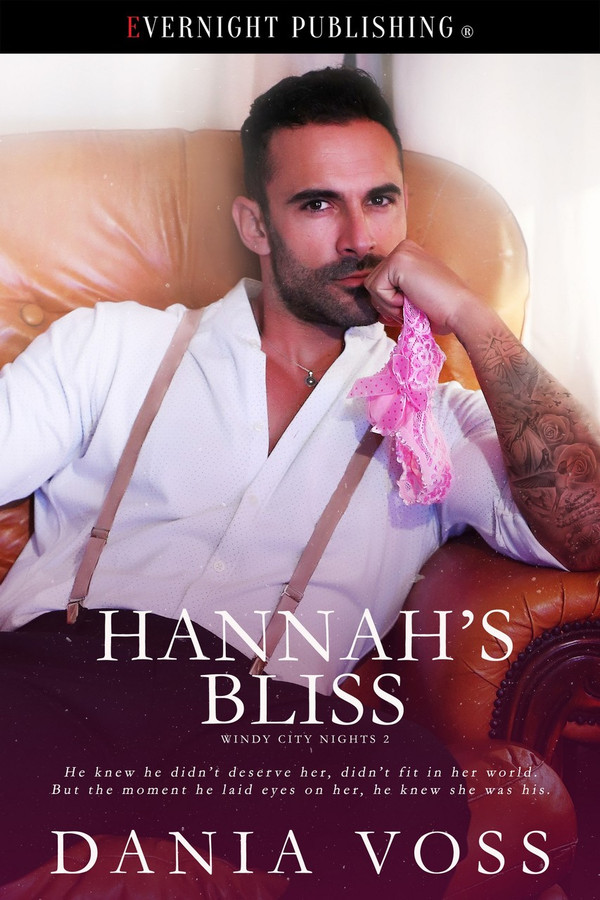 He knew he didn’t deserve her, didn’t fit in her world. But the moment he laid eyes on her, he knew she was his...

Rocco Moretti had a rough start in life. Abused by his parents and abandoned when he was six years old, he’s spent his life trying to prove his worth.

After barely getting out alive while deployed in Afghanistan, he’s settled into civilian life—for the most part. He’s convinced himself being a devoted brother, uncle, and associate at Dixon-Shaw Security is all he deserves.

Hannah Hailey has been professionally unfulfilled at her mother’s successful event planning firm for far too long.

Bullied into a relationship with a man her mother considers suitable, Hannah is miserable. Richard Hayes is an arrogant, cheating bastard she despises.

When Hannah and Rocco meet, their chemistry is undeniable, and sparks fly.

Hannah believes she doesn’t have a chance with the sexy Italian Marine, but is captivated by his seductive charm. Rocco knows Hannah is way out of his league, but is spellbound by the dark-haired temptress. He’s determined to have her at all costs.

Can they build a real future together or will pressure from Hannah’s well-to-do family tear them apart?

Hannah stood frozen in place, mesmerized in a corner of a small empty banquet room at Cucina Antonetti’s with Rocco, the much-too-sexy-for-his-own-good former Marine. Jake and Cassie’s wedding ceremony had gone off without a hitch—mostly. Everyone in attendance had been stunned, herself included, when it appeared Jake had changed his mind about getting married.

Unfortunately, it wouldn’t have been the first time she’d witnessed a bride or groom being left at the altar. Jake had been committed, though. When he’d seen his beautiful bride, he’d wanted to escort her to the altar himself. And it had been fun to watch the groomsmen alternate wearing the black top hat throughout the ceremony. She was thankful Patty hadn’t uttered one criticism and was back at their corporate office in Oak Brook working on another event. She had the night all to herself—and because of this ridiculous scheme—with Rocco.

“This ploy you and Joe cooked up is silly. We don’t need to do this.” She winced when Rocco applied the botanical cream she’d used on Luke to her bruised arm. Damn it was cold when it first made contact with the skin. No wonder he had thought she’d hurt Luke and grabbed her wrist.

Like a fool, she’d pulled away, when what she had really wanted to do was feel his hands all over her. Heat and pleasure pulsed through her veins as he now gently, almost seductively tended to her bruises. Her nipples tingled and beaded painfully. She was grateful for the light padding in her bra cups or he’d clearly see the effect he had on her. The man exhibited such raw sensuality, seemingly without effort, and she was at a loss as to how to react.

She’d gotten a glimpse of the tattoos that peeked out from under his suit jacket sleeves and shirt cuffs. She wondered how far up they went and how much of his warm, Mediterranean-toned skin was covered in ink. The man made Richard look like an idiot. Like a boy pretending to be a man.

“Maybe it is silly. But since you wouldn’t let me shoot Richard the Dick, we’re doing this. Joe’s on board with our plan.” He surveyed his handiwork. He nodded, seemingly pleased with himself, put the cap back on the jar, and tossed it in her event travel bag on the table beside them.

“That’s not saying much. Joe hates Richard.” That much was true. On a personal level, she didn’t care for Richard either.

“So do I. Stop making excuses for him, Hannah.” Rocco’s intense dark-brown gaze made her shiver. She could get lost in those eyes. “A real man doesn’t hurt women and children. A real man takes care of his family. He treats them with respect. He does everything in his power to make them happy.”

She sighed, knowing Richard hadn’t been and would never be any of those things to her. And even if he’d tried to be more the like man Rocco had just described, like the man she believed the Italian standing in front of her was, she felt nothing for Richard. She never had. Not like she did for the man she’d just met that day and who looked at her with such deep emotion and resolve she’d follow him anywhere. Where had that thought come from?

“Well, yes, I don’t disagree with you. But how does pretending you’re my date to this wedding and putting on some PDA display in front of Richard help matters any?” That was the brilliant plan Joe and Rocco had come up with when she’d refused to allow Rocco shoot Richard for being a dick.

“It’s payback for his mistreatment of you. Even though it’s obvious he doesn’t care about you, his ego will get in the way and he’ll be jealous of all the attention I give you. You’ll see. And you’ll feel better exacting a little revenge. Unless you want to get back together with him?”

He looked at her expectantly, as if daring her to admit she still wanted Richard.

“No way. I told you and Joe. After the wedding, I’m telling my mother I’m not interested in Richard and she and his mother need to figure out another way to work out their joint venture ideas that doesn’t include me and Richard together.” She and Richard were over. Her mother had no right to put her daughter in such a precarious position and she’d have to get over her disappointment once Hannah put her foot down. Enough was enough.

She was rewarded with a seductive smile and thought she felt wild need pass between them. It couldn’t be. This was all supposed to be an act.

“Good,” he whispered. Her heart raced when he removed the pins holding up her hair. “Your hair has been trying to escape this bun all day. Time to set it free, as it should be.” She heard herself moan when he massaged her scalp and ran his fingers through her loose dark, wavy locks.

She preferred her hair down, but Patty insisted that the female planners at the firm put it up at events as she believed it portrayed a more professional image. Just another thing, among many, mother and daughter disagreed on.

When he leaned in close and she felt his body heat, a delicious shudder shot through her. Her body lit up with a burning need like she’d never felt before with any other man. She thought her heart would beat right out of her chest.

“You feel it too, don’t you, bellissima?”

Too tongue-tied to speak, she nodded. Yes, she felt it. It was unexpected, but she would go with it. Richard had made her feel so unattractive and unworthy. Rocco made her feel beautiful and desirable. When he flicked open the top two buttons of her white silk blouse, she instinctively reached for his belt buckle.

“What the hell?” Richard barked.

Startled, Hannah nearly jumped out of her skin. God, she hated Richard sometimes. Rocco looked down at her with a smirky, mischievous grin and her heart fluttered. When he winked, her heart sank.

He must’ve sensed someone had stepped into the room. She felt like a fool. This was just a part of their act to make Richard jealous. Rocco wasn’t interested in her. He was just carrying out their plan to get back at Richard. She was so stupid. A man like Rocco would never want a woman like her.

She made to button up her blouse, but his strong, warm hands stopped her. “Don’t,” he whispered.

Rocco let go of her and turned to face Richard head on. She held her breath and chided herself for wishing he was still touching her. It’s just an act. Don’t forget that.

Hannah is a pushover. Her mother picked her boyfriend, her job is lacking and then she meets Rocco. He’s been through a rough childhood with abusive parents and survived Afghanistan. Can two people from opposite sides of life, find a happy ending together? This is a fantastic contemporary romance. Rocco really had my heart strings twisting. He survives so much as a child and still has residual issues. Hannah is a bit harder to like. She’s too much of a pushover for my taste. When she meets Rocco it’s like she’s found her backbone. I love the drama and the passion! And Richard the ‘boyfriend’, I wanted to punch that guy and not in the face. The author did a great job bringing these characters to life. If you enjoy contemporary romance, you’re going to love Hannah’s Bliss!

A wonderful story of two people moving beyond their perceived imperfections and finding the perfect love with one another. Loved it!

Oh my gosh, how I loved this book!! First I love the large “family” that’s is involved. How they look out for each other and are so close. And I love how Hannah &amp; Rocco met and fell in love. And they were flawed but overcame it with help. It was wonderful. I couldn’t put it down. Dania Voss has another awesome book!!