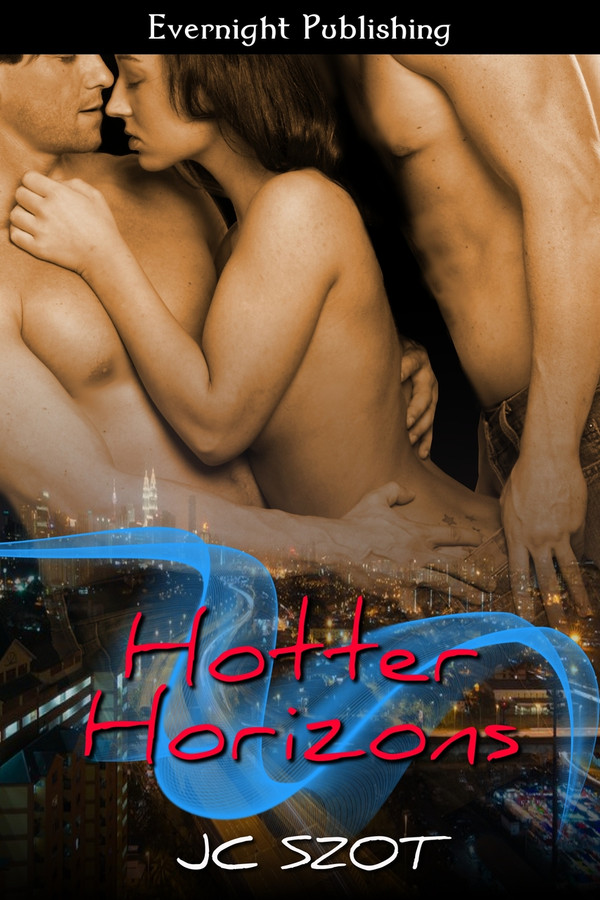 When Frances Carone ( Fern) reaches the end of her rope with her dysfunctional, hostile boyfriend, escaping is the only answer to achieve a clean break. Desperate, she hops on board a freight train.  Fern lands in Fields Grove, New Jersey and attempts to navigate her way through a future that is uncertain.

A classified ad in a local paper leads her to the doorstep of Levi Peridi and Alec Delaney. When Fern is hired to be their housekeeper, her anxiety over her future begins to ease. But when the men invite her out to a nightclub for an evening of dancing to celebrate her new life, Fern is torn over their intentions. Suddenly, things appear to be a bit more complex than dirty laundry and Clorox.

The shadowed lines of their hard bodies came together, pressing tighter. When Alec released Levi’s cock, Fern lost it. A squealing yelp spilled from her mouth. She stepped back as her hand flew up to her mouth, but it was too late.

Both men spun around. Two sets of shimmering eyes drilled into her. Her nipples tingled, protruding against the thin cotton of her short nightie. Her belly was already swelling, flooded with arousal, an arousal Fern wasn’t sure she knew how to act on.

“Frances,” he breathed, his voice dripping with want.

Levi slinked across the linoleum, his pants unzipped and clinging to his hips. Alec hung back, his mouth parted, his face lined with concern. Levi shrugged off his shirt, tossing it behind him. He spoke again, his tone softening.

“You’ve got us all hot and bothered here. I’m sorry, baby, but the truth is—”

She wouldn’t let them finish, her conscience pulling her back into reality.

“I won’t be the cause of any division here, between you,” she said quickly. Her skin moistened with sweat. Her eyes tracked over Levi’s chest. His biceps gleamed, his flesh alive. Dark lines of definition accentuated his toned chest and abs, his nipples dark nuggets. She followed those lines down into his groin. Her mouth dried at his magnificence.

His nostrils flared as his hand worked over his cock, the head gleaming with a satiny sheen. Levi was entirely smooth, not a thread of hair anywhere. Fern bit down hard on her lip, unsure of what to do or say next. Leave it to Alec to offer her consolation.

“You’re not causing any division. It’s unification that we want, and we want it with you.” His words were cautious. Alec ran a hand through his hair, shifting his weight from foot to foot, his eyes darting with nervousness.

“That’s right,” Levi said. One side of his mouth tipped into a wicked grin. “Oh Frances, how well you’ll complete things.” He smiled, still closing the space between them. He stood inches away from her now, his cock lunging for a tender hand to touch. “You’re beautiful, kind, and sensitive, so sweet you’ll be.” Levi reached for her. He traced her mouth with the pad of his finger, outlining her lips.

She fell into Levi’s eyes, swept away, under his spell. He was leading her in, yet the fear still teased, mocking an inadequacy that was fighting her, nursing her awkwardness. Alec was closer now, but still careful with his approach. Levi continued to lay out all the desires they’d kept caged for weeks.

“I want you, Frances, and so does Alec,” Levi said, his voice thick with need. “There’s just so much we want, and we want it all with you.” He smiled. Levi closed in on her, snaking his other hand around her neck. She felt the stiff stalk of his erection graze her hip.

Every joint went tight. Hesitation wormed through, colliding with an unfamiliar desire. It was truth or dare, all woven into one.

This is such a darling book. The two guys are special and wonderful. The gal is amazing. The bad guy is a little bit non-dimensional, but he didn&#039;t ruin anything and he was needed for stuff! The scenes of increasing passion among the main trio were magnificently gentle to intense, supporting the feelings that increased between the three partners. This is a fine treasure! Fern, Frances Carone, has to get out of town immediately! Her good friend Jada helps and this escape, somewhat ingenious even though it was totally not planned, does get Fern to Fields Grove, NJ from Easton, PA. Fern has some much needed luck in this little community that helps her get a good paying job with some very nice folks. Fern is such a cutie, although the guys think she is a fantastic hottie. Both descriptions are spot on and I loved her. Levi Peridi, works at home, and he gets to greet Fern first as she applies for her job. His insides do some serious flip-flops. Levi gives Fern the inside scoop on what he and his partner are looking for as a housekeeper and pretty much gives her the job. That is a tad curious, but not so after we hear Levi and Alec talk about it later. Alec works at a restaurant and alternates between lunch and dinner shifts. He is such a gentleman, super adorable, and an excellent counter weight to Levi. Threesome action is not new to Levi and Alex, but Fern is a babe in the woods. Alex is the rock and the gentle arbiter. He is more than delightful and I most definitely adored him. The trappings around Fern&#039;s troubles truly take a back seat to the alluring wooing and loving of her by both Alec and Levi. Such a warm to hot to explosive merging that simply blew me away. I heartily recommend Hotter Horizons for the centerpiece love story!

Hide and Seek by JC Holly

Hotter Than Hell by Berengaria Brown