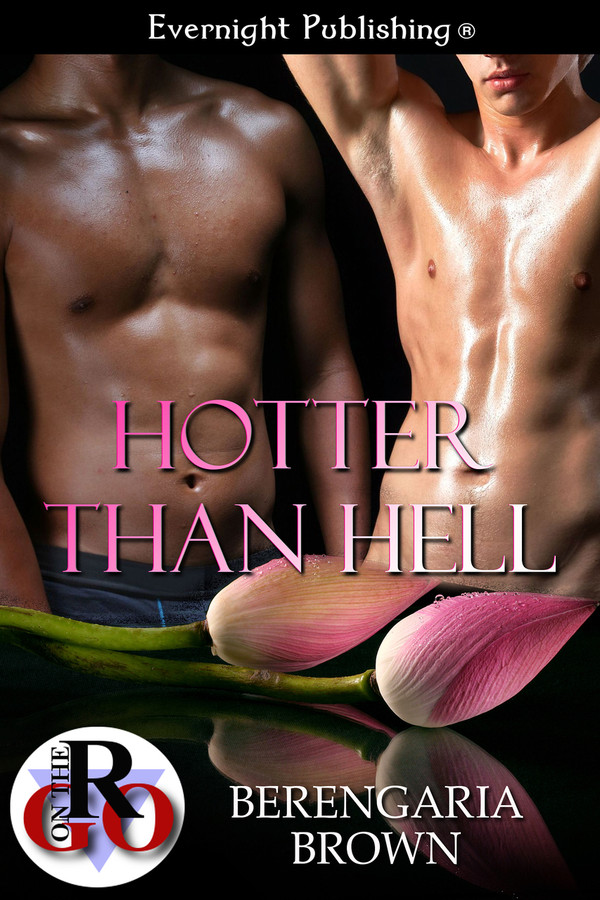 Enre has fiery red hair and an attitude to match. The world is full of injustice and he wants everything to be fair and equitable right now. Kalman is older, calm and logical, but the two men are drawn to each other. They work alone together at the far end of the gardens one day, getting to know each other as passion ignites between them.

Hot, sweaty half-naked bodies, and outdoor sex are great, but can two such different people find happiness together?

Enre pushed Kalman up against the wall. Watching him looking at him like that, seeing the love in his face and his good humor at all Enre thought of and did, was just so sexy to Enre. Everything Kalman was and did was just so right for him. They were two different people but their hearts beat as one. They shared a single soul and belonged together like this forever.

As fast as he could, he snapped the button on Kalman’s jeans and unzipped them, pushing at the denim to get it out of the way so he could reach Kalman’s delicious cock. Then he was on his knees, sucking Kalman’s dick deep into his throat. Deeper, deeper, swallowing him all the way down. Damn, the man tasted delicious. He was perfect. Everything Enre had ever wanted and more.

He drew himself up Kalman’s delightful body, stroking his palms over his skin under his shirt and tweaking his nipples.

Kalman smiled and pulled Enre closer for a hot and heavy kiss. “I love you so much,” Enre whispered.

Now Kalman leaned forward and unzipped Enre’s jeans. But instead of going straight to Enre’s eager dick, which was standing up and waving, he lifted Enre’s T-shirt up and licked wet lines across his belly. That was similar to what he’d done last night, except he’d sucked his finger first as if it were a cock. This time he was flattening his tongue against Enre’s skin and his belly was twitching and bouncing as much as his cock.

“You’re torturing me,” he groaned.

“There’s no hurry. No need to rush. Slow down and enjoy the journey,” intoned Kalman.

“That’s your mantra. I think you just want to see my cock implode one day.”

Enre took advantage of his inattention to roll Kalman’s balls in his hand, and press their bellies together. It wasn’t nearly as satisfying as when they were both naked, but it was better than being apart.

Enre used every trick he knew to tease and tantalize Kalman. He scraped his fingernails up the insides of Kalman’s thighs. He kissed him everywhere as well as sucking on his tasty cock. And then he turned him to face the wall. Of course, then he had to hurry into the bedroom for lube and condoms, leaving Kalman alone, but Kalman was still leaning against the wall watching and waiting when he returned.

“We need to go get our health tests done. Then no more condoms,” Enre said, puffing as he opened the lube and coated Kalman’s entryway.

“Do you think they’re open today?”

“I think we have quite enough to do already today organizing you to move in here.”

Enre felt himself pout and then laughed.

“Are you telling me to go slow again?” he twisted his fingers in Kalman’s ass, hunting for the magic spot that would make Kalman agree to anything he suggested.

Touching Kalman like this was making him more and more desperate to come. Likely it was heating him up just as fast as it was heating up Kalman. Hastily Enre lubed his sheathed dick and pressed it at Kalman’s entry. As always Kalman thrust his butt out, making it so easy for him, and then he was in, sliding into the heat and welcome of Kalman’s ass. This was what he loved. This was what bound them together. Their minds, hearts, and spirits were always aligned, but having their bodies joined together as well made their love ten times more potent. Only when they were linked like this could Enre relax completely. They were one. A unit, a family, and all his dreams come true at once.

Enre has fiery red hair and an attitude to match. The world is full of injustice and he wants everything to be fair and equitable right now. Kalman is older, calm and logical, but the two men are drawn to each other. They work alone together at the far end of the gardens one day, getting to know each other as passion ignites between them. Hot, sweaty half-naked bodies, and outdoor sex are great, but can two such different people find happiness together? “Opposites attract” is a well known idiom, and it certainly describes the two men in this story. Enre, the fiery, impatient guy, and Kalman, the thoughtful, logical man are very attracted to each other. That, quite often, is not the problem. The real issue in these cases, and certainly in this story, is whether the attraction and interest can overcome the differences and enable them to stay together for longer than just a brief encounter or two. Enre has a big heart, cares about everyone and everything, and wants to fix the world’s problems NOW. He would fit in well in a southern European country like Italy or Spain, where everyone is passionate and outspoken, but in the more laid-back Anglo-Saxon culture and society of the US, he pushes people away with his enthusiasm and demands they “do something” about whatever issue je is currently worried about. Even though he is aware of the effect he has on other, he cannot seem to stop himself. Kalman’s heart is no smaller than Enre’s, and he worries about some of the same problems as Enre, but he is less outspoken. Maybe it is because he is a little older, but I suspect it is mostly just because of who he is. He is very attracted to Enre, and he figures, he has a thing or two to tell him that may help the younger man reconsider his approach. And when the passion flares between them, one hot afternoon out in the back of the botanical gardens where they work, the immediacy of the fulfillment of their desires is balances with longer-term seed Kalman plants in Enre’s thoughts: being less pushy may mean people give his ideas a chance. If you like short, sweet reads about men who couldn’t be more different, yet have the same goals in life, and if you enjoy passionate encounters in ‘the great outdoors”, then you might like this short story.