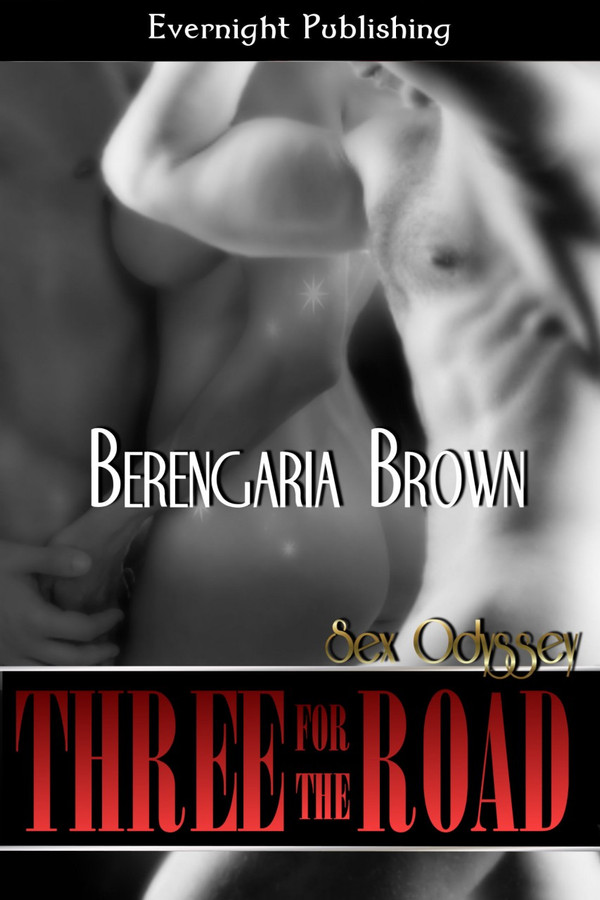 When three bed-buddies go on a two-week road trip together, will it turn into a sex odyssey or will it destroy any hope of a relationship or romance?

Jennifer Adams agrees to a vacation with Chris and Robert. When she realizes she’s expected to live in a shipping container, instead of a conventional RV, the vacation is almost over before it begins. Jenni is lured by great sex with two yummy men. But will that be enough?

Soon they were naked and snuggled under the heavy quilt on the big bed. Both Chris and Robert were large men, but the bed was more than wide enough for all of them.

They’d left the curtains in the living area open, so that moonlight lit the RV. It was dim enough to be romantic, but light enough for them to see each other. The bright sunburst colors on the quilt were muted shades of gray, but the sparkling lights in Robert’s and Chris’s eyes were easy to see.

“So what happens now,” she whispered, pressing her butt back against Robert’s cock and rubbing her hands down Chris’ muscular chest.

“Now we tell you a bedtime story,” said Robert.

“It’s called little Jenni long, black hair, and the two big bad wolves,” added Chris, his hand skating across her belly and lingering just above her mons, his fingers gently teasing the tender skin there.

“What happened to her?” Jenni’s hand had found his cock and she scraped her thumb lightly over the cap.

“She went to their cabin in the woods,” said Robert. When he said “woods” he pressed his cock into her butt and Chris thrust his penis up into her hand.

Robert put one hand on her hip and the other teased around the entry to her anus. His nails scraped the skin there, his fingers swirling round and round her hole until the cream seeped from her pussy with her need to feel more, to be penetrated.

Chris’ long fingers were resting on her slit, the longest one tantalizingly close to her channel.

Jenni’s brain was starting to fry with the need for more. She couldn’t decide whether to press back onto Robert’s fingers or forward into Chris’. “I want you. I need you. Now.”

“So Jenni went inside the big bad wolves’ house,” said Robert, sliding his finger into her ass and swirling it around.

Jenni lifted her upper leg and planted her foot flat on the mattress to give the men room to touch her. One arm was twisted behind her stroking Robert’s hot flesh, the other was on Chris’ shoulder, holding tight as tension was coiling in her belly.

“What happened next?” she asked her voice hitching with desire.

“Hmm. Maybe they offered her a nice cup of tea,” suggested Robert, his fingers busy in her ass, stretching her tissues and stroking the walls of her channel.

“Then one of the wolves kissed her.” Chris suited his actions to his words, dropping tiny feather-soft kisses across her nose, eyelids and jaw line.

Jenni took her hand off his shoulder to pull his face closer. Her fingers dived into his shaggy brown hair holding him as she kissed him back with a desperate passion. Their tongues tangled, hers stroking along his cheeks, then he sucked on her tongue, as his fingers curved up deep inside her to scrape along her sweet spot.

Robert licked along her neck, and sucked her ear lobe into his mouth, his fingers still tormenting her ass.

Frantically, she thrust her pelvis back and forward trying to take them both deep inside her at once.

Chris broke the kiss and gasped, “The wolves got condoms and fucked her brains out. The end.”

“Sounds like a plan,” added Robert reaching a hand around her to pinch her nipple.

A third finger pressed deep in her cunt and she came, holding tight to both men.

Night Owl TOP PICK! I decided to review this novelette because of the shipping container idea and wanted to know what that was all about. What I found was a wonderful story. Berengaria Brown&#039;s novelette, &quot;Three for the Road&quot; is delightful. I enjoyed the way Chris, Robert and Jennifer all cared for each other. It was heartwarming to watch their respect and love grow as the story progressed. Sometimes ménage stories are all about the sex, but this one was all about the love between three people which led to the sex. I hope Berengaria can build on this story and make it into a longer novel.

Dance for Three by Berengaria Brown