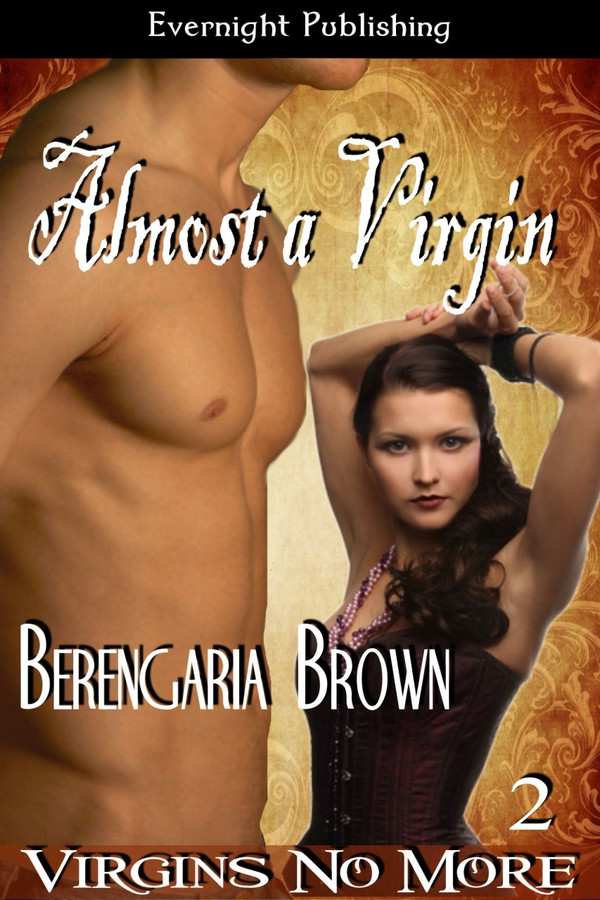 Theodora has loved John Smith ever since she was a little girl. But he's very wealthy and she's only a vicar's daughter.

John had been waiting for Theodora to grow up. When he kisses her in the garden at the ball, lust roars through him and he takes her there in the garden, only a few yards away from a hundred people. It's not until the deed is done that he realizes he's just dishonored his best friend's sister.

Theodora doesn't regret what she's done. She wants more. Even though John is only marrying her because he dishonored her, she doesn't care. She'll make him so happy in bed that he's bound to fall in love with her.

“Come to me, my beautiful wife,” he said quietly.

She swung her legs up onto the bed and shimmied across to him, not sure how close to get, so remained slightly apart from him, even though she longed to touch him some more.

He rolled her under him and straddled her, taking his weight on his knees.

“Your breasts are beautiful, my dear. So soft and white, and just the right size to fit a man’s hand.”

He accompanied his words with the appropriate actions, taking a breast in each hand and holding it then teasing the nipples with his thumbs. “They taste delicious too,” he added, sucking the nipples into his mouth one after the other, moving his head from side to side, licking and sucking until her breasts were once again aching with need.

Deep inside, she was aching too. Wanting him to possess her again, to fill and stretch her and give her that wonderful release.

When he sat up straighter to play with her breasts, teasing the nipples with his fingers, she was able to stare at his manhood. She wanted to roll his foreskin down and look at the head properly. Right now, only the top was visible, and it was more red than the shaft. In the brief moments when she’d touched him, it had felt different too. Softer, more responsive. She’d like to lick more than just the tip. When he’d licked her it had been such a wonderful feeling she was sure licking him would be enjoyable for them both.

But just as she was readying herself to touch him, he slid down her body a little and drove two fingers deep inside her woman’s place. “Ohhh,” she whimpered, trying to press her hips up onto his hand, to take him deeper.

He withdrew his fingers and held his manhood at her entry, then, gazing into her eyes, he thrust deep inside her in a single stroke. His shaft was so much better than fingers. Her channel stretched around him, hugging him close so that he touched every inch of her.

Still with his gaze on her face, he wiggled deep between her legs until their bodies were pressed tightly together, her hips forced wide apart as he withdrew, leaving her feeling bereft and lonely, only to drive deep again.

After several strokes like this, he picked her legs up and put them over his shoulders. He pushed even closer to her now, tilting her rear up a little so that he not only filled her but drove so deep inside her she could think of nothing but him, feel nothing but him, want nothing but him.

Over and over again, he thrust into her, only to withdraw and thrust again.

Her belly was crawling and itching with the need for completion. All she could see was his face, all she could smell was his manly scent. Her hands gripped his shoulders so she could rise into every beat of his hips. His forehead was creased with concentration as he stroked in and out of her, his hands on her hips, moving her just enough so that every touch from him caused a fire of desire inside her to flare brighter.

Then the peak was coming, rolling through her like a storm across the sky. Quickly Theodora grabbed a pillow from beside her and stuffed a corner of it in her mouth to muffle the scream she knew was about to explode from her. John slammed hard inside her and the pleasure broke, crashing through her, sending shards of joy from her toes to her head and everywhere in between.

She bit down hard on the pillow as her body shook and warm heat flooded through her. John pushed inside her again and yet again. Then she felt his seed burst from him, another wave of heat deep inside her. He held her tightly and they shook together as her muscles gripped his manhood over and over until they finally relaxed together.

John rolled them onto their sides, his body still inside hers, and held her close. He stroked her back and hips and she wiggled even tighter against him, loving his touch.

This was another great short story, although it focused a little more on side characters and left less room for John and Theodora. One got a small portion of the insecure feelings that Theodora had regarding why John chose to marry her. Although I am not a person craving angsty reads, the story could have explored Theodora´s doubts and the couple growing together in their marriage a little more. It all went a little too smoothly. Both this book and the previous one feel like chapters from a bigger book, told from each couples point of view. I like the characters, both the main ones and the side characters. I can already see the next chapter/couple lined up and I look forward to reading about them. Almost a Virgin is an enjoyable, quick read that I would recommend!

The Vicar's Virgin by Berengaria Brown

A Promising Virgin by Berengaria Brown