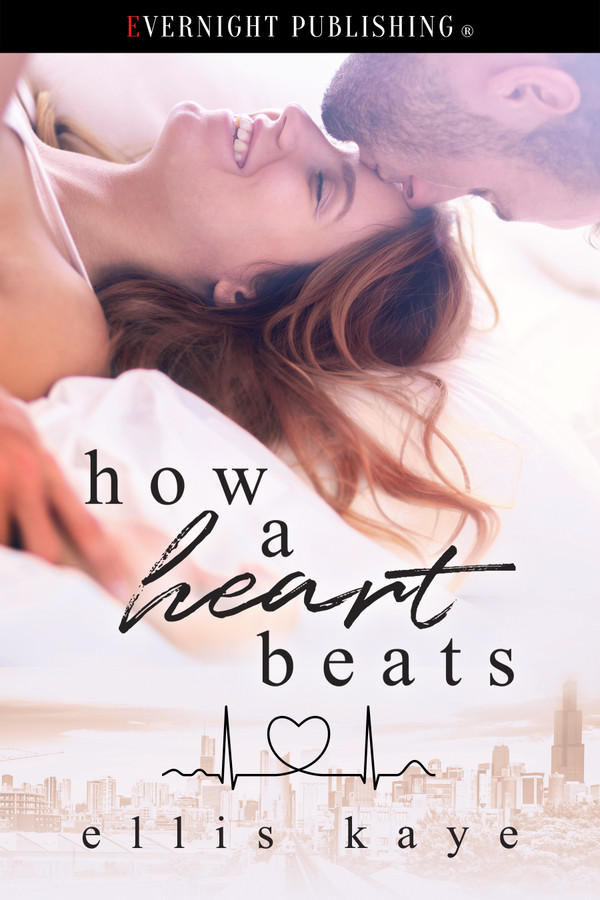 People in the business of saving lives live by two rules:

When sassy, sleep deprived, ER nurse Olivia Aberdeen is charmed awake by sexy Trauma Doc Anderson Cole it’s three-hundred and sixty joules of instant sizzle and swoon, but with their own personal wounds barely stitched together, the couple struggles to reconcile their past heartaches, making a fairy tale ending about as unlikely as a Chicago Cubs World Series Win.

Yet, for Liv and Andy a happily ever after is only a heartbeat away until a deadly contagion infiltrates their emergency room. Together, Dr. Cole and Nurse Aberdeen must battle their bad juju and the rule of threes after Andy’s decision to save one life could cost Olivia her own.

It wasn’t fair. Didn’t doing the right thing count for something? She didn’t want a reward for helping a stranger after falling down a flight of escalator stairs. She didn’t want payment for using her favorite white lab jacket as a pressure dressing. Sleep. That’s all she wanted, but no amount of Benadryl and red wine would bring down the high of saving a life.

Liv ambled along the platform and glanced at her watch. Escalator guy sucked up an hour of sleep. The autumn morning sun blazed its way to brunch. She frowned, full of stupid self-pity. Every joint ached and cried in stiffness. But her brain buzzed, wired with adrenaline and the juicy images of a pulsing arterial scalp laceration. Rather than turn down her block, she went straight and crossed the intersection, risking death by cab and drunk bike messenger to her local library.

She waved at the sweet old ladies who worked the checkout line, her eyes instantly connecting with her favorite librarian and next-door neighbor, Rose Loveitz. Rose had a sneaky habit of letting Liv check out stale reference books she’d use in lieu of her old cocktail of Ambien and alcohol.

Mrs. Loveitz looked her over with a sympathetic glance. If twelve hours in the pit hadn’t left her covered in dead skin flakes and filth, Liv’d run over and give the first friend she made in Chicago a hug. Instead she winkled her nose, miming disgust and pressed through to the back. Hidden behind the outdated World Book, atlases, and the bathroom were the remnants of the library’s card catalogue.

Liv opened a drawer at random and ran her fingers along the aged and brittle stack of four by six cards. “All right Flynne-comma-Augustus, whaddaya got for me?” Exhausted, she needed to squint to read the faded typeset.

“The Migration Habits of the Philomachus Pugnax… Yup, I think you’ll do.” She yanked the card from its drawer and slammed it shut. A loud crack echoed through the stacks. It was a life lesson Liv learned in high school. Nothing put her to sleep faster than reading something she give zero fucks about, and today that was going to be birds.

She grumbled her favorite list of curse words as an evil sunbeam seared through the old metal blinds. The building was ancient. Hot as balls in the winter, freeze your nips off in the summer with graffiti commemorating the Bulls’ first three ‘peat from 1993 tagged the work tables. Rows of little box Macintosh computers had green screens that still played Oregon Trail. The moment she walked through the doors a year and a half ago, she fell in love. Although, she secretly wished she’d found a fancy dry cleaner, or laundromat. In her world away from Savannah affluence, it meant she did her own laundry, and a yearly pap smear was a more enjoyable alternative.

Liv navigated the maze of shelves with ease, but the book acted like a beacon pulsing with light as she traveled down the aisle. Relief cloaked her weary body as her fingers connected with the spine. Elusive sleep lurked. A satisfied smile pulled on her lips.

“Ah, Augustus, where have you been all my life?” She inhaled the stale pages, and the weight of her chronic sleep deprivation pressed on her shoulders. The devil in the form of a two-minute power nap called, and Liv surrendered.

Stiff backed and irritated, Anderson Cole paced through the library stacks. Why in God’s name was a bathroom impossible to find?

“She’s got to be flipping senile…” he muttered, looking back at the octogenarian working the checkout desk.

The labyrinth of outdated reference books seemed to multiply like a bad Disney movie where the hero would have to choose between pissing himself or death by pride. He caught the eye of an attendant shelving books, but it’d be snowy day in Aggie August before he asked where to find the toilet two times in one visit.

His hands trembled from too much caffeine while his groin tried tear open from three too many overpriced, big-city, blood-of-virgin lattes. He’d have done just about anything to keep his mind off the call. The offer. The means to move on from the broken life he left behind in Texas. But death due to a ruptured bladder would have been real low on the list.

His cellphone vibrated in his pocket. Andy ripped the phone from his jeans, ignoring the judgmental leers and shushes he’d get after breaking the library vow of silence, but a sound caught his ear. A snore. Muffled. Feminine. Except it grew into a cough. The heavy snore of an insomniac.

The phone persisted, and he looked down. The snore interrupted what would have been a horrible mistake. It wasn’t the call. Talking to the train wreck on the other end would ruin the day. Week. Hell, why stop there? The rest of his damned existence.

If there was one thing he’d learned in the last fifteen months and twenty-three days, there was no timeline long enough for the grieving. He didn’t have the patience to be the gentleman his mother raised, and no amount of time above the Mason/Dixon would retrain the years of southern etiquette. He hit “end” and shelved the crazy on the other end for another day.

Andy searched the next aisle over. Sure enough, he found the source. Her. Peaceful, serene and completely upright, a nurse by the looks of it. Not a sexist assumption. Just connecting the dots. Shift workers’ insomnia, blue scrubs, and white shoes. Didn’t require a fancy degree to suss out.

He checked his watch. No one intended to be asleep in the library at nine AM. Blame the fairy-tale hero complex, but he felt compelled to rescue the woman from an inevitable ground level fall. The fact he had a preference for peaches and cream redheads had absolutely nothing to do with it. At least that’s what he’d tell himself after waking her up.

Great story! I enjoyed the writing and the characters. I started reading a hard copy a friend had and got immediately engrossed in the storyline and had to buy it. I couldn’t put it down!

I was so excited for the release of this book, and it did not disappoint! It&#039;s rare that I like all of the characters in a book, but I can&#039;t think of a single one that I didn&#039;t connect with on some level. Ellis Kaye will pull every emotion out of you with her debut. A great blend of humor, fear, anticipation, and romance - a page turner for sure. I found Ellis&#039; writing style to be particularly appealing because she didn&#039;t use corny language like &quot;moist heat&quot; (ick, who really talks like that?) in her writing. She wrote like real people think. There is plenty of medical-speak, but she makes it easy to understand for any reader. I can&#039;t wait for her next book! Favorite new phrase: &quot;Blue Bean!&quot;

Anyone who likes Grey’s Anatomy or other medical shows but wishes they got the medical stuff right will appreciate that the author took the time in How A Heart Beats to make the way an ER runs authentic. Also, Ellis Kaye did such a good job with some of the secondary characters like Lottie, Liv’s friend from Savannah, who is absolutely hilarious. The romance between Liv and Andy is super hot, and the reader is rooting for them by the end of their first encounter in the library. The author really puts them through the ringer, which always makes for a better story. Neither Liv and Andy are perfect people, which makes the love between them more believable. I would highly recommend this book to people who love spicy contemporary romance novels.

This was my first Medical sexy fiction, and I could not be more impressed. The story of Olivia the ER nurse, leaving her Savannah home for Chicago to escape a hazy past and her love affair with ER Doctor Anderson, himself leaving a life behind finding each other finding love, loss and holy wow some sexy sex scenes. I’d say the writing is first rate, with plot twists and surprise reveals handled brilliantly. One was so expertly done, the heartstrings so thoroughly tugged and engagingly written it brought this writer literally to tears. Quite literally. It’s that good. I won’t give away the ending, you have to read it! Highly recommended!

Nurse Olivia and Doctor Anderson are a great pair but love is never that easy. Just as they start a relationship, a contagion infects the hospital. Love may not be enough to save them. I love medical dramas on television. Surprisingly, I haven’t read to many of them. This is a fantastic story! Olivia is such a great character. I loved her personality! She is definitely sassy. Her chemistry with Anderson is thrilling. When the contagion hits, there’s some great suspense. I really enjoyed watching them work together and save lives. This is the first book I’ve read from Ellis Kaye and definitely not the last! ​ How a Heart Beats is a must read!

Fantastic writing!! It was definitely one you couldn’t put down. Such a deep story line that went way beyond just another romance novel, in a great way. I can’t wait to read her next book!

Liv Aberdeen is an ER nurse with a heart of gold. Andy Cole is the best doc ever to grace a trauma bay. This book hits just about every hospital cliche out there. But it&#039;s fun. And maybe even a little tear jerky at times. The great American novel it is not. But it&#039;ll keep you entertained for an afternoon or two.

The ups, the downs, the laughter, and the serious, Ellis Kaye put me through the ringer on this one. If you love steamy medical romances, you are in for a treat! I received this ARC in exchange for an honest review.

I chose 5 stars because the writer made a beautiful love story about a nurse and a doctor. There was a lot of good medical drama also that if you didn&#039;t have medical knowledge you would understand because everything was backed up with what it really was. Go out and get this fast paced book

Fantastic writing!! It was definitely one you couldn’t put down. Such a deep story line that went way beyond just another romance novel, in a great way. I can’t wait to read her next book!

I chose 5 stars because the writer made a beautiful love story about a nurse and a doctor. There was a lot of good medical drama also that if you didn&#039;t have medical knowledge you would understand because everything was backed up with what it really was. Go out and get this fast paced book