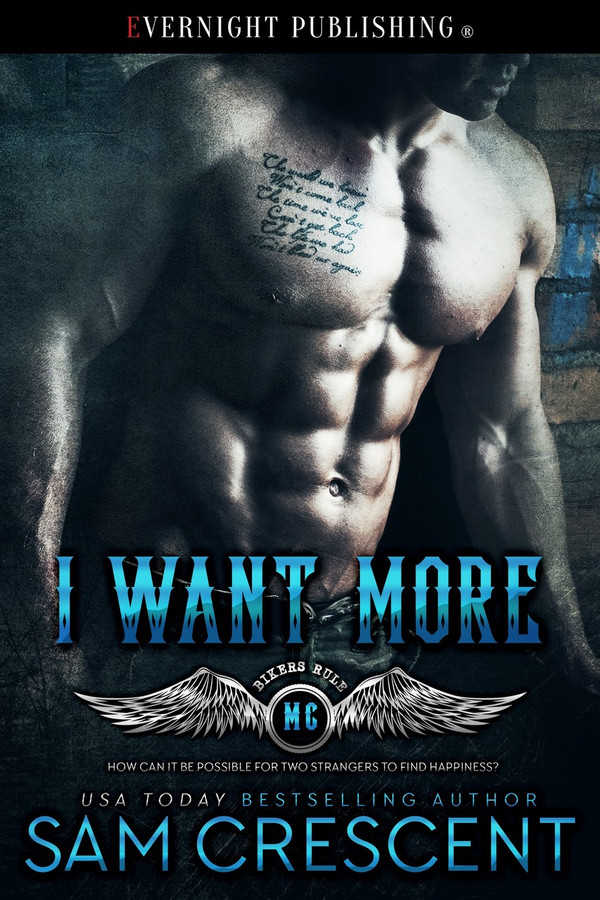 Spike is known for messing around, constantly taking whatever pussy he wants. He’s loyal to his club, and would never dream of changing who he is. One night after a party, he decides to take to the road, to clear his head. Something is wrong with him. He no longer wants the club pussy, nor does he get off on watching them be fucked.

That one late-night ride changes everything.

Star is used to being bullied by people. Even though she has dropped several dress sizes, they still bully her. Now a very handsome man is protecting her, and it is … surreal. He’s a biker and he’s dangerous, but she can’t resist.

How can it be possible for two strangers to find happiness? Can Spike share his club with her?
Does he even want to? Or will they keep that distance between them forever?

He placed his hand on her hip, trying to keep her still so that she didn’t feel the pressure of his dick digging against her ass.

Her body was so soft and curvy compared to his. He was having fantasies about her pussy wrapped around him, and that was not helping.

She did as he asked, and turned her face toward him. “It’s horrible.”

“The taste will grow on you.”

He sipped his own beer, and when he couldn’t stand it anymore, he took her bottle from her, and led her onto the dance floor.

“You seem in a really weird mood tonight,” she said.

Spike took her hands when she held them by her sides, and placed them on his shoulders. “You have no idea what you’re doing,” he said.

“As a matter of fact, I do.” He placed his hands on her ass pulling her in close. Not caring that she felt his erect cock, he focused on her. The rest of the bar fell away until it was only the two of them.

Her cheeks were flushed, and he watched as she licked her lips. Even though they were in a crowded room, he wanted her to feel surrounded by nothing but him.

“I wonder if I could make you change your mind,” he said, knowing he was confusing her. She didn’t have a clue that he wanted her, and that he was trying to seduce her.

He swayed her hips, keeping her against him. With one hand on her ass, he used the other to sink into her hair. He was much taller than she was, so he could easily command her to do as he wished.

“There is one thing I want to know,” he said.

He slammed his lips down on hers. Plunging his tongue inside her mouth, he finally tasted her. For the past three weeks, every single night when he’d watched her leave his bike, he had been wanting to know exactly how she tasted.

Spike is tired of being with the women who have been around the club forever. He just doesn’t have interest anymore in someone who has already been with every other member. He’s getting seriously bored. Deciding on a whim to go out for a long ride and clear his head, Spike races into the night. Hours later, he pulls up to a random, small supermarket in the middle of nowhere. A group of guys are bullying the check-out lady, and Spike finds himself finally stirred into action. Is Star exactly the sort of woman he’s been unconsciously seeking? I really enjoyed the pace and timing of this story. I loved how it moved along at a steady rate, with no superfluous words or scenes. The reader gets to see things from both Star and Spike’s perspective and this really helped me feel a strong connection with both characters. I found the pace of the story wonderful. Spike and Star were front and centre pretty much the whole way through. I also really appreciated how they didn’t simple stare into each other’s eyes and then just leap straight into bed. Star was quite reserved and Spike needed to show patience and faith in them together. They both worked hard and earned their relationship and I felt that was a truly wonderful thing to read – I thoroughly enjoyed it. While there was some plot around the club, mostly the meat of the story was all centered on Spike and Star and the growth of their relationship. Readers who like a character-centric storyline should be really pleased with this. I loved how the pacing of the story was fast but at no stage did I feel like the romance or sexiness was skimped over. I found this to be a lovely story and one I will probably reread happily in the future. With steamy sex, addictive characters and a lovely romantic storyline, this was an excellent book that made me really happy. Recommended.

This short biker romance is another great read from Sam Crescent! I loved this book. Spike really was like a white knight wearing a cut and riding a Harley. For a biker he oozed chivalry and sweetness. He fell for Star from the moment he rescued her from some bullies. When he turned on the charm that girl was a goner. But she wasn&#039;t just a good deed to this bad ass biker. She was his salvation. I felt this was one of Sam Crescent&#039;s more romantic love stories. As for Star....she was more than just the usual chubby heroine from this author. She had a feisty personality. She gave Spike a hard way to go when he messed up. It took some help from their friends before he charmed his way out of trouble. This biker romance was sizzling hot and sweet at the same time. I loved the characters, the strong plot and the hot sexiness. I look forward to more books in the Bikers Rule Series.

WOW ! I want more certainly gives you more! The chemistry between Spike and Star is beautiful and builds throughout the story into the pure connection tying this couple together. There wasn&#039;t major action within the MC itself in this story as it focused more on the characters and their growing relationship but that was great for a change of pace as nobody wants to read stories all the same. I loved that we see glimpses of Jesse and Piper from book one and other characters hopefully to have future stories of their own. I think with the two clubs coming together there is set to be a lot of excitement in the future books. I really enjoyed this sweet, sexy read and Spike and Star have a great story about love, passion, misunderstandings and overcoming it all together I loved it and am sure you will too! Happy Reading!

This is more than a MC novel. It goes more into our characters personal feelings about each other than it does about what&#039;s going on in the club. It&#039;s sweet and you can&#039;t help but love Spike and Star. A great read with an awesome hea.

I voluntarily reviewed a copy of this book I felt so bad for Star. She was a girl who was bullied every week by some idiots who always pick on people who are not the same as them. But I loved the way Spike defended her. And even though he was just helping someone who was being mistreated. But for some reason he didn&#039;t like her being alone and didn&#039;t like her walking home alone. And he worried about her being bullied when he wasn&#039;t there to look out for her. The Connection between Star and Spike was light and fun and she gave as good as she got. But because of the distance between Star and Spike he was exhausting himself travelling to see her. And that caused some misunderstandings where Star&#039;s thinking that Spike is ashamed of brining her to meet his family. But Spike has a family that hates seeing him miserable and suffering so they decide to step in. Short sweet and definitely has some drama. Loved this series and can&#039;t wait to read more.

The story starts with strong emotion evakening in you. I was pissed. Because the first time we&#039;re introduced to Star is when she&#039;s bullied. And to think this treatment is happening for years... Yeah, pissed. But I have to say that moment is when I fallen for Spike. Or at least I got female version of boner for him. Lol &quot;Why don&#039;t you little s***s f*** off?&quot; Now you can see why. That man has a way with words. The way he stood up for her... And later on Spike made me smile. It&#039;s cute to watch a tough biker having sweet side. Or like he called it being pu**y for a girl he just meet. I liked connection between these two. And how happy they were together. Just there was one problem. Star lived few hours away from the club. So, it took a toll on Spike, while he was traveling back and forth. And of course misunderstanding happened. Which caused pain and misery for Star and Spike. Lucky for them, he has a great family, the club, who sincerely cared about theirs member. And they will do whatever it takes to bring happiness to Spike. Will they success? Go and find out.

He Wants Her by Sam Crescent