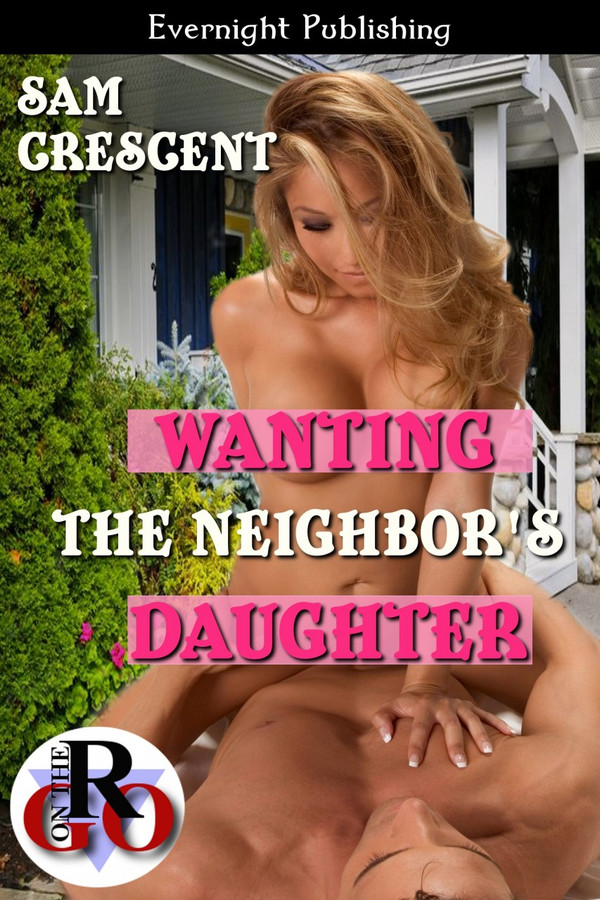 Luke Reynolds desires his neighbor’s daughter, Kimberly. His feelings for her have grown over the years he’s known her, and now she’s twenty and he can’t deny her anything.

Kimberly has had a crush on her neighbor for a long time. He’s a womanizer and he’d never look at her twice.

One weekend house-sitting for her parents, both of their lives are about to change. Neither knows about their true feelings, but after this weekend Luke and Kimberly will not have a choice. Can their love survive her father’s wrath? And can Luke wait for Kimberly to make her his?

“Because you and I both know you’ve got a crush on me. You’ve had your little crush since we first met. I also know you watched me fucking my girlfriend.”

She gasped. Kimberly hadn’t known he was watching. How did he see her?

“You also know I want you.” His hand moved down to her breast stroking her nipple through the fabric of her costume.

“How did you know I was there?”

“You’re the only woman I know who wears that perfume. The scent follows you, Kimberly. I knew it was you when you looked at me. I’ve seen the heat in your eyes. When I heard you’d been fucked at college I figured you moved on. I see now you haven’t moved on.” His hand moved up to the strap of her costume. He lowered the strap achingly slowly. Kimberly knew he was giving her time to stop him. She didn’t want to stop him. “Tell me, Kimberly, were you thinking of me when you were with your other man?”

The strap went below her breast. He started with the next, and within seconds her chest was exposed. His gaze didn’t leave hers. “I asked you a question.”

“Yes.” She whispered the word afraid of him laughing at her.

Kimberly closed her eyes waiting for him to laugh at her. “I can promise you, Blondie, the guys in college are a poor substitute for the real thing.” He circled her nipple with a finger. Opening her eyes she saw he stared at her chest. “You’ve got such lovely, responsive tits.” He closed the distance taking one hard bud between his lips.

She moaned, sinking her fingers into his hair. What else was she supposed to do? Never in her wildest dreams did she imagine being in his arms let alone having him suckle her breasts. He moved on to her other nipple licking the bud.

Luke broke away from her breast and stared up at her. “Straddle me.”

Obeying his command, she stood and eased onto his lap. Her covered pussy rested on his hard cock. She gripped the back of his chair, holding herself. Luke gripped her hips in his firm hands.

“Tell me, Kimberly, have any of the guys ever given you an orgasm?” he asked.

“There was only one guy, and no, he didn’t.” Her blush must be making her look like a ripened strawberry. She didn’t know what else to say or do. Luke was taking her completely by surprise.

“Then I’m going to rectify that little problem.” He tapped her thigh. “Stand up.”

She did as he said, standing up. Kimberly went to cover her breasts. Luke swatted her hands away. “No need to cover your nakedness around me.”

Luke removed a foil packet from his pocket and placed it on the table. “I always come prepared.”

In the next breath she took, he pushed the shorts he wore to the ground before taking a seat. “What do you think?” he asked, cupping his erect flesh.

Her pussy burned with the need to be touched. Kimberly was more turned on than she ever thought possible. Licking her lips, she glanced at his face before returning her stare to his cock. “You want me?”

Plot: 3. Oh the old taboo of a younger woman wanting the sexy older man, made even more taboo by him being the next door neighbor who is famous for one-night stands and going through women like Kleenex. Kimberly is a 20 year old college student who has been asked by her parents to house sit for the weekend. Kimberly couldn&#039;t be more excited about the request and is hoping to get a little alone time with her hot neighbor. Luke Reynolds has lusted after Kimberly since she was too young to touch is wickedly excited about getting to know Kimberly and proving to her that he is done with his old ways. After Kimberly catches him and his “flavor of the week” having sex, he realized that no other woman does it for him like Kimberly and he&#039;s ready to make a commitment and settle down with the woman he has loved from afar for the past several years. Sex: 4. The few scenes in this novella are very hot and very descriptive. This is quite a dirty book and left me feeling satisfied. Overall: 3. While the story line isn&#039;t that original and is a bit predictable, I still found it entertaining. It does exactly what a Romance on the Go novella is supposed to do – satisfy your need for a lunchtime quickie.

Luke and Kimberly skirted around their feelings for each other for a few years. Luke was a really sweet guy and was waiting to see if Kimberly felt the same as he did. I enjoyed watching them get together and what her father thought and how Luke reacted.

The Enemy's Daughter by Sam Crescent