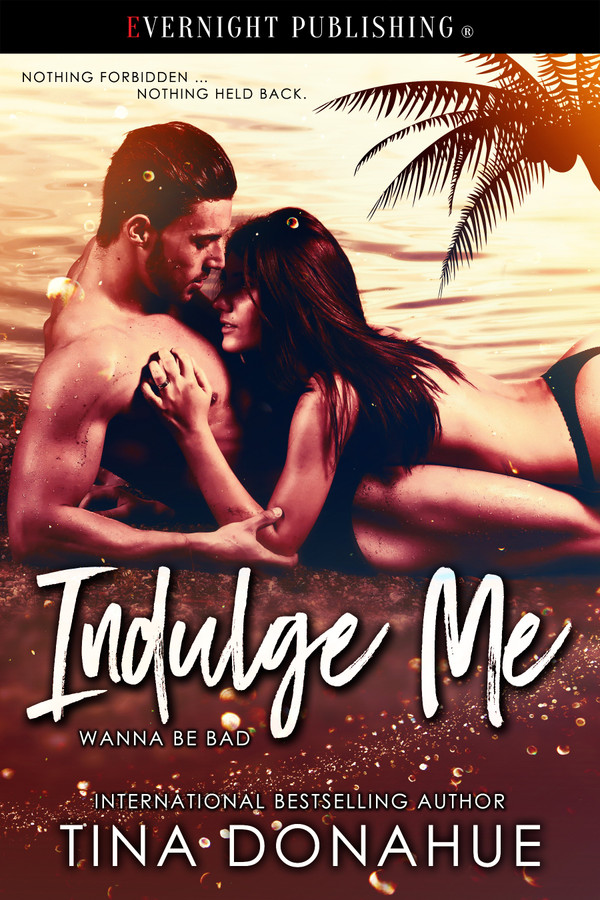 Nothing forbidden … nothing held back.

Lissa prefers reading to clubbing, but will do whatever it takes to get the juiciest assignments at a major travel magazine. Her chance arrives, and she’s set to experience a posh Caribbean resort—except it’s the anything goes theme week where nudity is expected and lusty hook-ups make threesomes look downright tame. Holy Hell, what has she gotten herself into?

Precisely what resort owner Jon Thorne thinks. Tall, dark, and luscious, he fears the randy male guests will eat her alive, resulting in a lousy review. His only option is to serve as her guide for every decadent delight, from nude body painting to Dom’s Den, where submission and punishment rule. Unless she wants to call the whole thing off…

Dream on. Tempted beyond anything she’s known, Lissa matches his passion and then some, surprising him during a sexy adventure like no other.

Back in the cart, she brushed sand off her feet and looked at him. “No reason to linger here. I’m good to go. Take me to the best place you mentioned.”

“You know what I mean.” She struggled not to smile. “Show me everything.”

She’d regret asking that. Keeping his wits for the moment, he drove toward a place he adored that had nothing to do with nudity or sex. This locale was different. Something he’d had no hand in creating but was blessed enough to witness.

Their path took a mild turn to the left. Rather than continue on it, he took a rarely traveled road to the side, ascending several hills, each steeper than the last. It wasn’t a mountain range by any stretch, but compared to the sea-level resort and beach areas, it was spectacular.

At the top, he drove to the edge, a sturdy wooden fence keeping anyone who might find their way here from going over the side in the dark.

She pulled off her sunglasses and stared, her lips parted, pure pleasure on her face, better than her curiosity when she’d ogled numerous dicks. “Wow.”

Her delight pleased him, making his pulse beat faster than it should. “Come on. Let’s get out.”

He hurried to her side and laced his fingers through hers.

The Atlantic stretched in every direction, sun sparkling off it like a zillion jewels. Gentle swells rolled toward the beaches and crashed meekly on the sand. Guests ran to meet the water then skittered away.

He imagined them laughing.

Encounters rose regal and tall, a white glistening mass in the distance. The golf course was the finest money could buy, every amenity top drawer.

Those things couldn’t match what he found here.

She gripped the fence and climbed the lower rung.

“Hey, easy.” He slipped his arm around her waist, stirred by her heat, surprised at how small she felt. “Don’t go any higher.”

“I have to.” She scanned the view, rapture on her face.

The wind whipped her pants, showing more than he guessed she wanted. She had worn a thong.

Warmth spilled from every point he owned and settled in his stiffened dick.

Her voice seemed to come from far away, the breeze and his pounding heart muting other sounds. “Why?”

“You have this to look at every day.”

And work. He hadn’t been here in weeks.

She shifted, her shoe skidding across the damp wood.

He held her tighter. “Careful.”

“No freaking way. I have to go higher. Please.”

Her naked joy was like nothing he’d heard from Mackenzie, unless it involved expensive jewelry. The afternoon he’d caught her throwing herself at his poor, alarmed father, a five-carat diamond engagement ring had rested in his pocket, which he’d planned to give her that evening at dinner. His sexual encounters here had ended in mutual satisfaction that lasted a few hours, nothing more. Certainly nothing special. Unable to deny Lissa, he helped her to the next rung, holding onto her hips and legs.

She flung out her arms, threw her head back, and laughed.

Her delight touched him, muddying his thoughts. He didn’t know her and wouldn’t, but this moment seemed somehow right and necessary. Her skin glowed beneath the rays, reddish highlights blazing in her hair. He couldn’t picture her in snow and ice. She belonged in lightness and warmth, perfumed breezes caressing her flesh, nature edging out civilization, time slowing down.

“Wow.” She held her fists to her chest and beamed at him. “Thanks for bringing me here.”

He’d rarely felt as worthy and should have dismissed his emotions, but couldn’t. “My pleasure. You ready to come down?”

He matched her smile.

On her feet, she squeezed his arm. “Thanks again.”

A mole graced her temple, which he hadn’t noticed before, along with three barely visible freckles on her nose. He liked both and met her gaze.

The air calmed, and sounds faded. Everything surrounding them drifted away.

His heart beat wildly. He cupped her face, unable to help himself.

She stilled, her lips parting.

An invitation he couldn’t accept. It was lunacy. They were only playing at this. He should take her to the hardcore attractions so she’d flee, as he wanted, rather than focusing on her softness surrounded by his strength, or her heat increasing his.

Leave. Bring her somewhere else. Convince her to go home.

He stepped away from the fence, taking her with him, then touched his mouth to hers and slipped his tongue inside.

His skin tingled. She tasted clean and pepperminty, her own unique flavor indescribable, beating out the others.

Lost in her warmth and scent, he slipped his arm around her waist and held her close, kissed her deep, and forgot about everything else.

Thrill Me by Tina Donahue