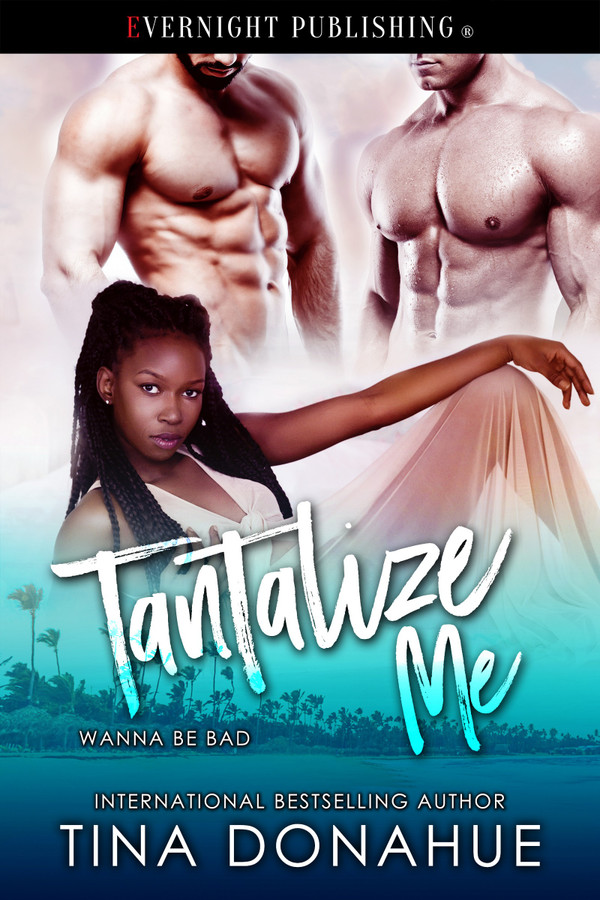 When it comes to lust and love, sometimes you have to break the rules…

Not believing in happily ever after with any guy, Olivia indulges her carnal needs at the hedonistic resort where she works while pursuing her dream to design jewelry.

Brothers Ethan and Gabe have had women chasing them forever, their good looks and their family’s billions a major draw. Just what they don’t need or want are predatory females. Stuck at the resort on a project neither care to do, they meet Olivia who’s everything a woman should be: bright, fun, and totally unimpressed by their wealth. Hooking up with her during the ‘anything goes’ week—when nudity rules and every sexual activity is celebrated—proves easy. Resisting anything deeper is impossible.

Because sometimes you gotta break the rules.

They stepped closer to the ginormous pool flowing yards ahead, possibly as lengthy as a football field, the structure continuing to the left and right around the walls. Floor-to-ceiling windows faced the water, showing the outside landscape: hills, buildings, a golf course, and the sea.

The best part, though, were the falls. They spilled from openings in the wall to pour into the continuous pool. Each afforded a chance to swim beneath them, hidden by a curtain of water.

“Fuck, this is nice.” Ethan undid his pants and shoved them down. “Where’s a chaise or pad or something to lie on?”

“It’s beneath the water.” While they’d been admiring the view, she’d stripped and kicked her clothes aside. She placed her choker and hair decorations on her shorts. “Follow me.”

“Say what?” Gabe held her wrist. “Beneath the water?”

“Yeah. You better hold your breath when you’re down there or things could get dicey.” She bit her lip and feigned concern. “You do know how to swim, don’t you?”

Teasing him and Ethan so rocked. “Remember when I said we’re wasting time? The way you slow-walked here along with your other delays have already eaten up a half-hour.”

Ethan pitched his clothes to the side. “The fuck they have. Lead the way, if you can. My guess is we’ll pass you in a New York min—”

She dove into the water, leaving them behind.

They jumped in and cut through her wake, catching up effortlessly.

Ethan fingered water from his eyes. “Where to now?”

“Beneath the last waterfall. Race you.”

She was yards ahead before they joined her, either reluctant to do so or they wanted to see how long she could hold her breath while waiting for them.

At last, they reached the same spot. Gabe pushed sodden hair off his forehead. “We go under here?”

In answer, she pulled in a mammoth breath and dove down.

By the time she reached the door, they were beside her, their hair wiggling in the water, air bubbles escaping from between their lips.

Gabe released a huge bubble then clutched his throat, his eyes panicked.

She would have laughed at his performance if not for losing precious air. After slapping his arm, she pressed a large button next to the door. Like the other, the red light turned green and the panel slid to the side allowing entrance into a tunnel. She swam several feet then rose to the surface and into an air pocket. Treading water, she pulled in several breaths, taking her fill.

They did the same, their heads swiveling as they regarded the scene.

She pointed past Ethan. “Your drawings would look great on these walls.” She bumped Gabe’s shoulder. “Your tunes would be epic playing in here. Even better than what we have now. It’s cool, but Jon should mix things up. Don’t you think?”

Gabe focused on the water rather than her. “How far is this room you mentioned?”

“Yeah.” Ethan had avoided glancing at the walls the moment she’d mentioned his art.

Didn’t matter. She wasn’t giving up on them. “This way.” She swam ahead. “We have to go under once more before we reach our stop.”

Halfway down the tunnel, the door loomed beneath them, the water making it look larger than it actually was. It bore the same lock as the others, its panel sliding open to an unfurnished anteroom, a sole door within it several feet ahead. When everyone was inside the space, she pressed the final button. The panel behind them slid closed and whirring sounded, similar to sucking noises a vacuum makes.

The water receded swiftly, leaving them dripping and clean, the sunscreen and grime from the soupy day having washed off. Fans came on next, warmed air pouring from every direction to dry them.

The guys turned a slow circle, their gazes darting everywhere.

She wasn’t certain what they expected to see besides artfully hidden air vents. “Are you wondering how this was built?”

Gabe shook his head. “I know how. I’m marveling at what a good job the engineers did.”

She padded to Ethan. “And you?”

He regarded the ceiling. “Just seeing if there are any cracks we need to worry about.”

Bull. Yearning filled his eyes. She would have bet a year’s salary he pictured his artwork embellishing the ceilings and walls. As picky as Jon was concerning details, he’d left this part far too sterile. Unless he’d planned it so the actual room would astonish in comparison. “You guys ready for the pièce de résistance?”

“Guess I’ll have to take that as a maybe. Here goes.” She reached for the button to open the door but stopped before depressing it. “By the way, when you mentioned Underwater Land, it got me to thinking about this. Which is why we’re here.”

They nodded. Ethan glanced at the button. “We’re going inside, right?”

“That was the plan, but… Neither of you are prone to fainting, are you?”

“Good fucking God.” He pushed her hand away and bumped his fist against the button.

He gaped, his mouth forming an O.

Gabe’s was as wide.

No one could blame them for their unvarnished reaction. Shelby had shown Olivia advertising pieces for this place. Seeing it in real time made it more dreamlike than any photo could capture. There were no walls, in the conventional sense, the space a nearly complete circle bounded by glass to reveal the surrounding water. Light filtered through the azure color, mimicking sunrays. Coral and other marine vegetation swayed in the gentle flow, the colors kaleidoscopic: pink, purple, green, blue, even white. Brilliantly hued fish darted by, spectacular designs decorating their bodies and fins. In the distance, naked guests swam among the critters, bubbles from their oxygen tanks frothing the water.

Some would eventually swim this way to peer inside at the show.

A large circular bed dominated the space, wide and long enough to accommodate six large men, the mattress dressed in pale-blue silk. To the side stood a plasma TV, nearly as monstrous as a theatre screen. She guessed for those who’d already seen everything and weren’t impressed by this bounty.

Ethan and Gabe padded to the bed and stroked it, the fish and humans beyond the glass unable to hold their attention. Their focus settled on her, more than lust in their eyes. Behind it seemed genuine need.

An inner alarm sounded then quieted, serenity replacing her doubt. Not because she’d allow herself to get emotionally close to them. They were good men she could trust not to deliberately hurt her. They liked her as a person and a woman. It showed in their prolonged gazes, the way they teased and how good-naturedly they took her shit until they’d had enough.

Still… She had to be cautious, though during these next hours she’d allow herself to dream. With their gazes following her, she padded across the thick carpet to an ornate credenza and opened the top drawer.

Once she had what she needed, she turned and lifted her hands. Strings of condoms dangled from her fingers. “Ready to party?”

Tantalize Me is a story about the senses and how, sometimes, the easiest and hardest way to seduce someone is by finding out what makes them tick and providing opportunities to help their dream come alive. Olivia works as a waitress but has no problem with the ‘anything goes’ week and also with getting down and dirty when her needs arise. Ethan and Gabe are two billionaire businessmen, stuck in their father’s company. When these three meet, the attraction is both instantaneous and through the roof. This is the third book in the series but can easily be read as a standalone. Although I think the island may have been described in the previous books, it was simple enough to see due to the wonderful descriptions given. Tantalize Me is an erotic journey that starts off purely physical but moves on as the characters start to care about each other, even when they don’t want to. You do get a HEA but you are made to wait for it and wonder. A great read that I thoroughly enjoyed and have no hesitation in recommending.

Indulge Me by Tina Donahue

Thrill Me by Tina Donahue