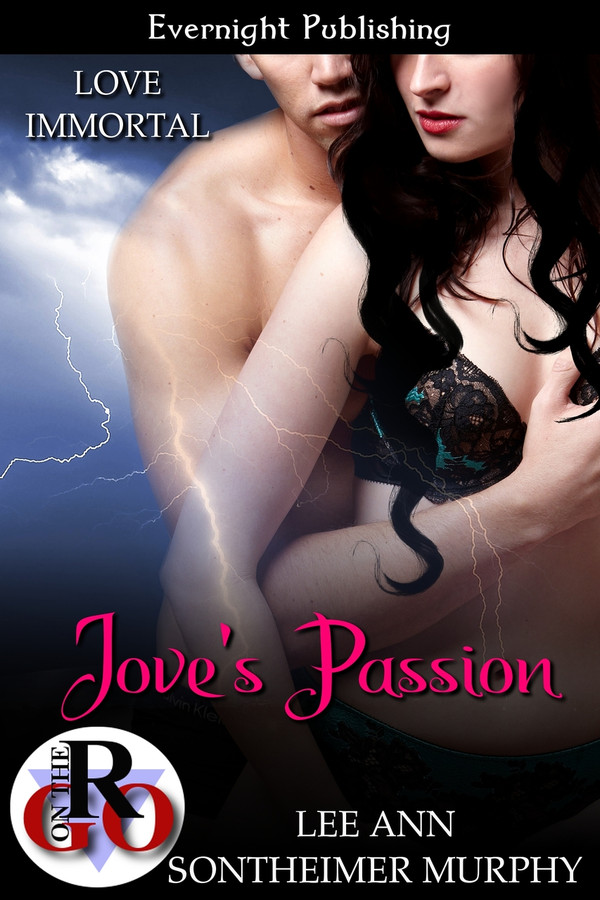 Take one ancient god living a mundane life in Texas and add a beautiful woman to the mix...

Jupiter Jove, known these days as simply ‘Jay’, is so taken with journalist Skye Marcus that he wants more than a sexual encounter. Since the sky is Jove’s traditional realm, it seems somehow meant to be. She’s as willing as he but she has no idea who—or what—he really is or that he can control the weather.

When he tells the truth, she can’t handle it and runs from him. But Skye can’t stay away, returning to beg for a show of power that will change fate—for them both.

Jay handed her the glass and she smiled. “Thank you. I could do the interview to kill time until we can go eat and I would love to see your rooftop garden.”

“Excellent idea.” He adored showing it off in all its splendor. “Let’s go up now.”

They emerged into the green space where the aroma of blooming flowers hung heavy in the air, sweeter than any perfume. Skye walked into the heart of it with a child’s delight and a grin on her face.

“This is amazing,” she said. “I can’t believe you’ve managed to get all this to grow so early in the season. It’s barely April. Do you have heaters or something?”

“Trade secret,” he replied. Since he controlled the skies and the weather, the climate on top of his building remained constant. If he chose, he could enjoy spring or summer year round, and he often did.

As she leaned over to inhale the scent of some roses, Jay’s crotch tightened. He wanted her, and the curve of her back as she bent enticed him. In the old days, I would have mounted her now, taken her by right and will without a word. Drawn to her, he strolled over and put his hand on her ass, tight against the short satin skirt. He enjoyed the solid feel of her flesh, separated by no more than a thin layer of cloth. When Skye didn’t protest, he slipped his fingers under the skirt and stroked her ass through her sheer hose. To his delight, she wore no panties, and he thrust his hand forward to touch her pussy lips in a bold caress.

“Excuse me,” she said. Skye stood upright and whirled to face him, her eyes lit with fire. “What in the hell was that? I’m here as a journalist, not as a high dollar call girl. You don’t get to touch me, Mr. Jove.”

Such umbrage might have impressed him but he saw through the façade. When Jay stroked her, he shared the quiver that shot through her body at his touch. She liked it. I know it, she knows it. A mortal man would have stepped away but Jay came closer. He lifted a strand of her hair and pushed it back from her face. “Oh, I think I do, beautiful Skye,” he said.

Two steps and his mouth loomed a bare inch from hers. Jay hooked one arm tight around her slender waist and touched his lips to hers. Heat erupted between them with the fiery force of an erupting volcano. Under his mouth, Skye’s burned with potent fire as her lips melted beneath his. She made an odd little sound, part moan, half wordless protest, as Jay increased pressure. He drank pleasure from her mouth and delighted as he sensed her body’s response. From his tingling mouth to his tightening cock, Jay yielded to the rush of desire. There would be no turning back now. He would not, could not quit, until he’d taken her.

Skye’s hand rested on his shoulder and her fingers twined into his hair as she pulled him closer. He deepened the kiss and added some tongue. When she whimpered in response, he moved his mouth down to the hollow in her throat. Jay let his lips linger there, caressing and teasing. He kissed down to the top button of her blouse, then undid the buttons with his swift fingers. No bra or camisole created a barrier between her lovely breasts, each crowned with a full nipple the size and shape of a ripe purple Moscato grape. Jay couldn’t resist tasting it, his tongue laving it before he suckled it. The salt of her skin, the heady fragrance of her perfume, and the tender bud in his mouth combined to enhance his erotic pleasure, so he did the same to the other nipple.

“Oh, that’s so fantastic,” she moaned. Enjoyment deepened her voice and made it sultry.

Jay stripped the blouse from her body and cupped her breasts in his hands. He kissed them as he worked down the zipper on her skirt. Skye stepped out of it and he tore away the panty hose. Then he knelt, hands braced on her hips, and licked a slow line down her flat belly. He reached her cunt and parted the lips so he could insert his tongue. Her body convulsed when he did and she cried out.

With her so ripe and ready, he maneuvered her toward a wide stone bench beneath one of the rose arbors. Jay planted her on her back and thrust into her with powerful force. His shaft filled her to capacity. Around his dick, the walls of her pussy radiated fever hot and clenched tight to keep him in place. Each time he pulled back to enter again, the wild delight spiraled higher as the fires burned with unholy heat. Beneath him, Skye Marcus writhed and cried out, her face suffused with color.

A very interesting story with one interesting god. I liked Jay and Skye I do wish they had more time to build more into their relationship but still a good story