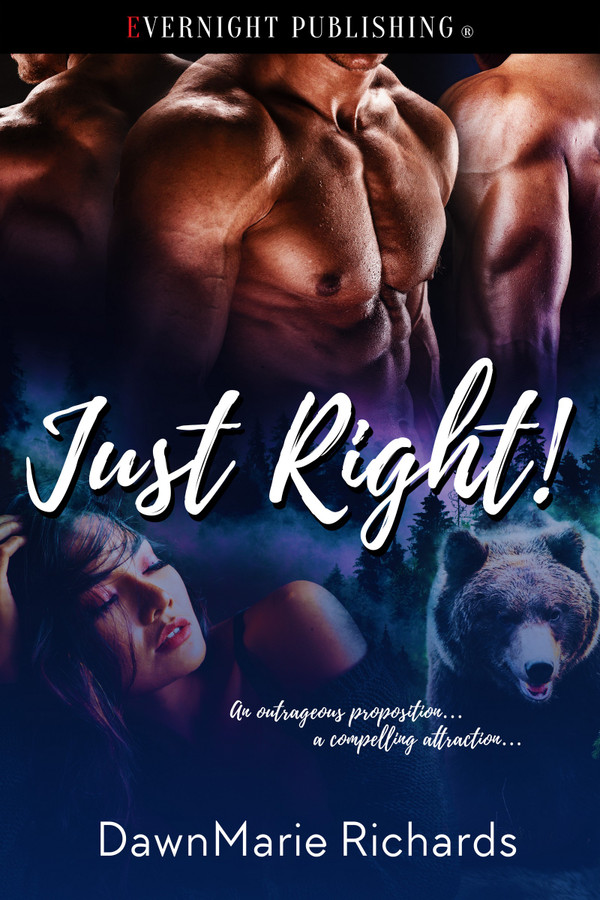 With no memory of what or—arguably more important—whom she did the previous evening, Christa lays the blame on disenchantment and too much tequila. But her bemusement turns to shock when she emerges to face her mystery host and discovers not one man, but three, waiting on her for breakfast. What kind of degenerate invites friends over to meet the one-night stand?

Brothers Felix, Asher, and Tate share a great deal more than DNA. Close in a way few understand, the Baers eat, sleep, and work under the same roof. They support each other’s every endeavor, including beguiling the occasional weekend guest at their secluded cabin in the woods.

An outrageous proposition … a compelling attraction—will it be more than one woman can handle? Or, for Christa, will three Baers be JUST RIGHT?

Christa peeped around the edge of the bedroom door, her mouth dropping open with disbelief at the scene at the end of the short hall. Not one man, but three, lounged at what looked to be a kitchen island, coffee cups in hand. Great. An audience.

She glanced over her shoulder back into the bedroom. She wasn’t getting out that way. Never mind the fact she had no clothes or phone. No. She had to go out there. Taking a deep breath, she squared her shoulders. Unfortunately, a wash of nerves turned what she’d intended as a nudge into a shove, and the door struck the wall behind it with a conversation-ending thump. Three heads turned in her direction.

“Goldie’s up,” one of them quipped.

Seriously? A nickname? Ignoring the irrational, but no less urgent, itch to wipe the smirk off the face of the bearded man who’d spoken, Christa strode down the hall.

She’d just made it over the threshold into the kitchen when the men got to their feet. And her determined steps stuttered to a stop. They were huge! Well over six feet tall. Standing shoulder-to-shoulder, their expansive chests created a wall of muscle.

The reality of her situation came into sharp focus. Alone with three towering strangers, she clutched at the edges of her borrowed robe, pulling it tight beneath her chin.

“Who are you?” she demanded, though her voice was little more than a breathy whisper.

Their eyes went wide, and, despite the panic threatening to overwhelm her, Christa noticed they shared the same rarefied shade of brown, a color so light and pure, it gave them an otherworldly quality. For a moment she wondered if she might still be dreaming.

“You don’t remember?” the middle one asked.

She had to grind her molars together in order to respond.

The bearded one laughed, but the other two shut him down, throwing sharp, disapproving looks in his direction.

“We met last night at Walden’s.” Middle man, again, touching fingertips to chest as he continued to explain, “I’m Asher, and these are my brothers, Felix and Tate.” He indicated each with a quick nod.

Brothers. She managed to shift her gaze from one to the other, but their faces barely registered.

“Please.” Asher lifted his hands, palms showing, and took a step toward her. But Christa shrank from the gesture, stopping him in his tracks. “We’ll explain everything. I promise. But … you’ve gone very pale. Maybe you should sit down.”

No maybe about it, but her feet refused to move. And not just because it would mean being within arm’s reach of the men. With each passing moment, the likelihood she would cry, throw up, or—becoming more probable by the second—both, kept her rooted to the spot. She had no intention of moving one inch further from the only known escape.

She winced at the screeching edge to her voice, but it got her what she wanted.

Beddington! The small town bordered a national forest where she’d gone hiking several times. It was a beautiful place. It was also at least forty-five minutes from where she was currently crashing and remote in the way of most northern New England hamlets.

She looked around wildly. But the view through the triptych of floor-to-ceiling windows only supported his claim. Beyond the flakes which swirled and hovered over the pane, trees as far as the eye could see.

The Right Time for Love by Shawn Lane

His Mrs. Right by Sam Crescent