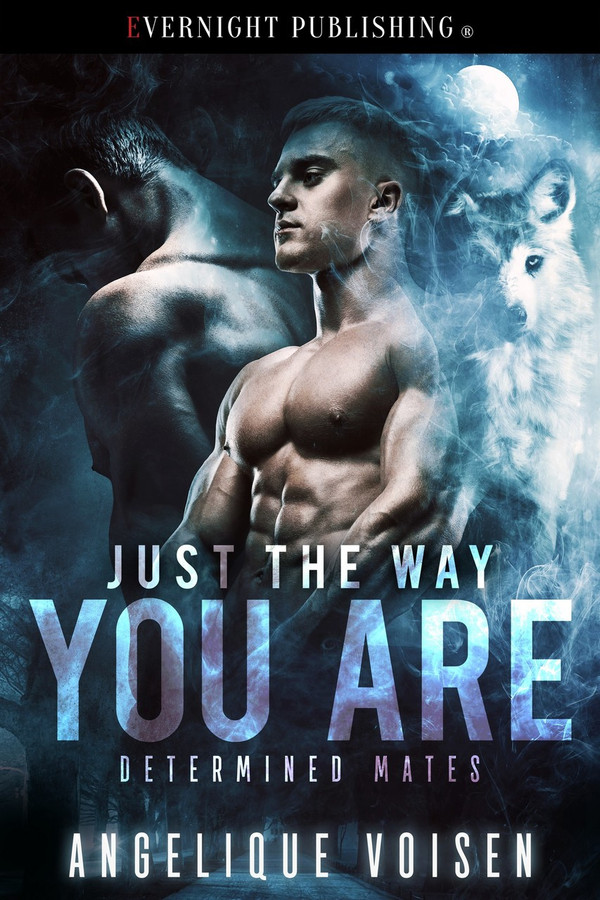 Werewolf Abel King is an accountant by day, average, slightly overweight and has zero ambitions of climbing the pack ladder. All that changes when his boyfriend breaks up with him. Deciding to man up, Abel enlists in a gym membership only to end up saving an Omega who recently moved in town. When Abel’s wolf tells him Tommy is his mate, he doesn’t know how to react.

Tommy is tired of moving from place to place. He and his brother have been hoping to find a permanent home in a new pack, except trouble comes in form of two wolves who think he’s fresh meat. Abel comes to his rescue and his wolf tells him Abel’s the one, but will Abel accept a deficient Omega as his mate?

Abel panted, stared down at the tempting offering beneath him. He could feel the press of Tommy’s hardening dick against him and his own, swelling with need. Tommy reached out, touching his unshaven cheek, about to drag his lower, but Abel growled, used one hand to keep Tommy’s wrists above his head.

Abel didn’t know where this new confidence came from, except he was starting to like his new, confident self. Tommy, too, felt the same way, because the Omega licked his lips in anticipation. The smell of their arousal was thick in the air, ambrosia he drank down eagerly.

“Okay,” Tommy whispered. “I like this new side of you.”

Abel kissed Tommy again, taking all of the Omega in. This time he didn’t rush. He took his time, tasting Tommy, licking, sucking, nipping. When he pulled back, Tommy parted his lips slightly, expression dazed.

“So good,” the Omega murmured.

A smile found its way to his lips. “We’ve just begun. Keep your hands above your head.”

Tommy nodded, an eager expression on his face. Abel had every intention of making his sweet Omega mewl for him, beg him for more. He layered kisses down the side of Tommy’s neck, fixating on a particular spot between shoulder and neck. Setting a bit of teeth there, Tommy shuddered, moaning.

He raised his head. “What exactly are you begging me for, Omega?”

His wolf rose to the surface, eager to take what this Omega offered so freely. If Abel placed his mate mark on Tommy, it would seal their bond. Tommy wearing his marks would tell the world Tommy was rightfully his alone. Abel snarled, his human and wolf half warring inside of him.

“You don’t know what you’re asking,” he replied, voice harsh.

While most of the others in the pack saw Abel as mediocre, Abel hadn’t been too phased by that. Recently dumped though, Abel can’t help but wonder where the hell his life is going. Tommy and his brother are looking to join the local pack, but as a barren Omega Tommy knew he didn’t have any real value to offer the pack, so he isn’t hoping for much. When Abel rescues Tommy from unwanted advances, the two men realize they can both offer each other things they need. Can they work things out? I found this to be an interesting story. I enjoyed some of the paranormal world-building – as the first in a new series I was glad the author peppered through the story bits and pieces of the werewolf lore and rules which are often difficult to catch in later stories. I also really enjoyed how Abel and Tommy didn’t just glance at each other and fall instantly into bed. Both slightly prickly and with their own problems, the two men spent a bit of time warming up to each other and I loved coming along for that ride. The sex in this story is hot and intense. There is a very little bit of kinky play (a very light spanking scene and an almost lighter restraints scene). Unless a reader really doesn’t like even the tiniest hint of spice in their sex scenes I feel these scenes won’t be too hard or go too far for pretty much anyone. The elements are very very light (almost too light in my personal opinion) and a part of me wonders if the scenes might have been stronger or hotter without the small hints of kink in them. The emotional intensity between Abel and Tommy was fiercely strong – as was Abel’s dominating wolf – and lightening the tone with a “play” at the kinkier side to their sex actually lessened that intensity in my eyes. I’d have preferred no kink and have that heat and strength of emotional and paranormal intensity kept ratcheted up high. This is just my opinion though and other readers might thoroughly enjoy the naughty edge the spanking gives to the sex. I found some of the pack politics and scheming quite interesting. I was pleased we were introduced to a number of secondary characters within the pack and saw a few of the different layers. There is clearly – again to my opinion – a number of problems within the pack and I hope to read more about these in the future installments. With an interesting new paranormal world, strong and interesting characters and a lot of steamy hot sex I feel this is a great start to a new series. I will definitely be keeping my eyes open for future stories.