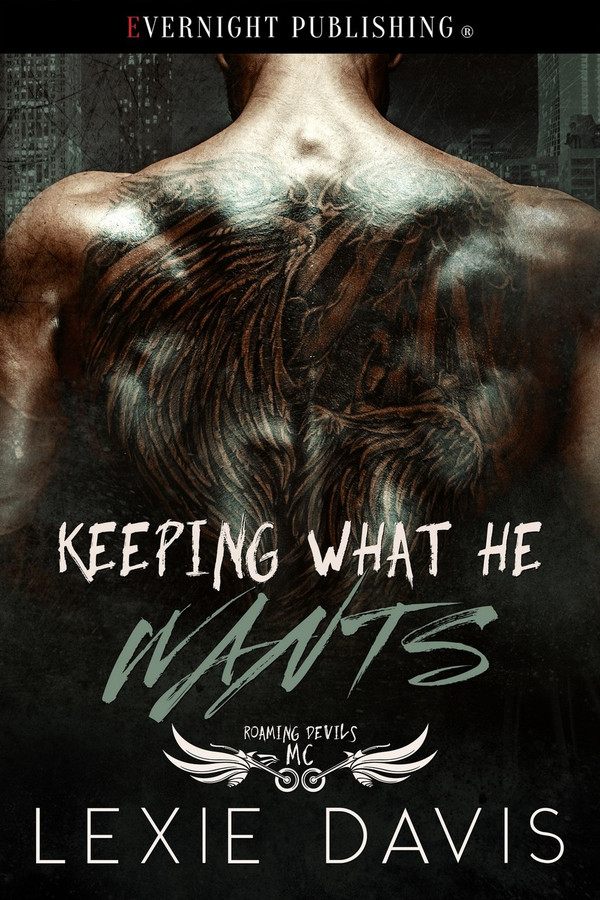 When Ryker Dennison became President of the Roaming Devils Motorcycle Club, it was a dream come true. Not only did he have great plans for the future of the club, he had everything he wanted, including Dr. Ella Hawkins by his side.

Ella made the decision to stay with Ryker despite everything that came between them. Their agreement, however, is that she has nothing to do with his club. As skeletons start coming out of the closet, Ryker soon learns that problems of the past are only the beginning of a new series of problems for the future of the club. Past decisions start haunting him. Not only is the club’s future in potential jeopardy, but so is his future with Ella. In a true test of his leadership, Ryker learns just how far he’s willing to go to keep what he wants.

He pulled the blankets back so that her long legs weren’t tangled in them. She rubbed her feet against the mattress while she whimpered. Ryker stroked her calf, sliding his fingers upwards toward her thigh. She didn’t wear panties to bed, and he had complete access to her wet pussy if he wanted it. God, she was tempting. He hated to wake her up, but he didn’t feel right about leaving her asleep either.

“Ella?” he said, louder. He pushed against her thigh, shaking her slightly.

She jerked awake, her eyes popping open. “What? What are you doing?”

“You were having one hell of a wet dream, baby.” He slid his hand higher on her thigh. “It didn’t seem right to bury my face in your pussy with you still asleep.”

He hooked his fingers in the waistband of her shorts and tugged them down and off her body. She closed her eyes as her legs parted for him, her bare pussy gleaming with her moisture. He’d only gone to sleep two hours ago. He’d come home long after Ella had fallen asleep and crawled silently in beside her so he didn’t disturb her. He’d never expected her to wake him up. Definitely not the way she had.

“I was dreaming that you were fucking me on your bike.” She smiled. “You handcuffed me to the handlebars.”

“I didn’t. I don’t.” She gripped his hair, tugging as he flicked his tongue along her clit. “I thought you would like that idea.”

He groaned, pulling her fleshy lip into his mouth. She tasted like heaven. So damn sweet. “There’s no fucking way my bike will hold during us fucking. It would crash to the ground. Then I’d be pissed. Not to mention if you’re handcuffed to it, you’d go with it and then I’d be really pissed. You don’t need to go into work with a broken arm from a wild sex injury.”

He shoved his tongue inside her, thankful she didn’t say anything more. He liked her all sprawled out in front of him on their bed. Or sucking him off in the shower. He didn’t need wild and kinky sex to fulfill his needs: he simply needed Ella.

“Please.” Ella clenched his hair in her fist. “I need you.”

He pushed up from her reluctantly. “How did you imagine it?”

She grinned. “You were straddling the seat. I was bent over in front of you. The hum of the engine vibrated against my clit as you thrust into me from behind.”

He gave her a smirk. “That was some fucking dream.”

“What can I say? You always get me hot and bothered.” She reached for him, and he let her pull him up so that he covered her body.

Her softness surrounded him as she wrapped her legs around his hips. He opened his mouth to kiss her, sucking her tongue as he ground his hips against her. She made him smile when she gasped, her soft whimpers cluing him in to her need.

He grinned and pulled her lower lip between his teeth. “You’ve got me.”

Before he could continue, a fist pounded at their front door, jolting them from their actions. Ryker frowned before extracting himself from Ella. He grabbed a pair of shorts and pulled them on quickly while Ella stood to look for his t-shirt.

“I don’t know.” He went down the hall to the front. Blue lights flashed outside, and he cringed. What the fuck did the cops want now? He opened the door and saw Ella’s father face to face.

“Ryker Dennison, you’re under arrest.” Her father pulled him out of the apartment and pushed him up against the bannister. “Do you have any weapons or sharp objects on you?”

He snorted. “I’m in a pair of shorts. Not a lot of places to hide things.”

“Where there’s a will, there’s a way.” He kicked Ryker’s feet apart and patted him down.

Ryker cringed at the sound of Ella’s voice. “Go back inside.”

She stared at the scene. Her father loved making the arrest—­­Ryker could see it in his eyes. He could only imagine how that made Ella feel.

“Why are you arresting him?”

“He’s a dopehead, Ella.” Patrick Hawkins pulled Ryker away from the bannister and shoved him toward the steps. “You should know this by now.”

This is the second installment of Lexie Davis&#039;s Running Devils MC series. They may be together, but their problems are just beginning. Ella&#039;s father Pat has Riker arrested, but it ends up being a bogus arrest that her father set up all on his own. Ella meanwhile isn&#039;t too happy about being told that she has to stay in the house by herself, while Riker gets to do what he wants. The two of them do a lot of fighting in this book, and it does get a bit annoying to watch. Ella also decides to stake her claim on Riker because she&#039;s angry about one of the club women trying to claim him. Riker&#039;s father is up to his no good tricks yet again, and Ella ends up being right in the path of it. But will Riker fix the problem or not? It&#039;s going to be interesting to see how the problems seeing how all of the problems are solved in the final book, Behind Closed Doors.

“Keeping What He Wants” is a cute story! The main characters are an interesting combination being that one is a doctor and the other is a notorious biker. I think I might have enjoyed the story more if I had read the first book. There was some serious history between the main characters in how they came to be and what Ella’s father had to do with their relationship. Ella is the doctor, who is caring and wants nothing to do with motorcycle club even though her man, Ryker is the president. Huh? Ryker is tough and will do anything to protect Ella even stand up to her father, who set against the relationship. He is even willing to sacrifice his own relationship! Sad! There could have been more going on in the story leading to the main events! The author harped a bit too much on the jealousy Ella had over the slutty females that roamed the club. I think she definitely made her point at her surprise visit. The story flowed well enough but I still had lots of question despite all the details the author tried to include in the story. I have other books from Lexie Davis and will continue to read her stories!! I am giving this story 4 stars. I really liked parts of the story and loved how passionate Ryker was for Ella.