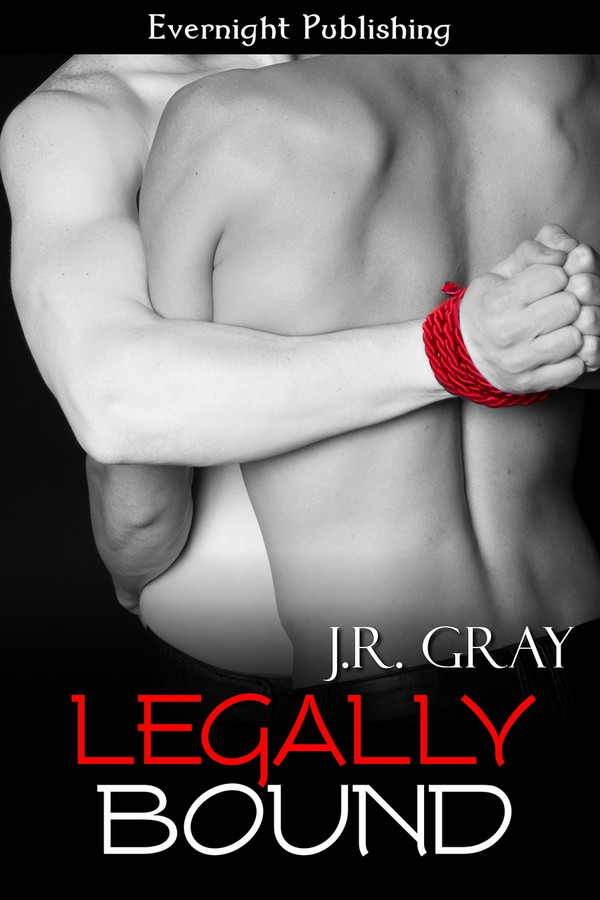 The last thing Daniel, a hard-working public defender, expected to see the morning after a one night stand was his hook-up staring back at him from the wrong side of the law. Assigned to work his case, Daniel vows to keep things professional with Rafael but has a hard time controlling his craving for dominance, the control, and the connection they shared. Rafael, a paid Dominant in the Chicago underworld, has been dealing with a cop problem for far too long. Used to sex with no emotion, he’s entranced with Daniel’s submission, his innocence, and…could there be something more? Can Daniel clear Rafael's name, keeping him out of jail and in his life, with the odds, a cop, and the mounting evidence against them?

“Oh shit,” he said too loudly, drawing the attention of the bailiff. He waved her off, muttering, “Nothing.”

“I fucked one of our cases last night,” Daniel admitted, knowing he would get it out of him one way or another. There was no point fighting his partner’s excellent extraction skills.

“Which one?” Jesse asked, looking over his shoulder, way too amused.

He tried to nod subtly to one of the prisoners.

“You have to give me more than that.” Jesse stood up and blatantly turned around to study the men sitting in the rows behind them.

Stiffening in his seat, Daniel tried to keep his back to the man he had seen every naked inch of, as well as had his tongue buried inside of, till the early hours of the morning.

“Dark hair, six feet plus, green eyes.” He tried to speak out of the corner of his mouth so no one could read his lips.

“The one with the sleeve tattoo and the huge arms?” Jesse asked.

“Yeah,” he answered in a low, sheepish voice.

“I knew it was that one. You so have a type.” Jesse flipped back around to take his seat once more. He instantly went for the files, lifting up folders and setting the large stack right in front of him.

“What are you doing?” Daniel kept looking over his shoulder to see if the guy showed any signs of recognition.

“What’s his name?” He didn’t look up from the stack of files as he spoke.

“Rafael,” he whispered as his face flushed just saying his name. “What are you doing?”

“Figuring out what your lay did,” Jesse said, positively glowing by now.

“I really hate you,” he responded, pulling at his tie and trying to loosen it.

“You’ll thank me later.” Jesse hummed, plucking out the file and flipping it open. “Oh, hot damn, you picked a good one.”

Daniel snatched the file out of his partner’s hands, his eyes going wide. Life just got a little more interesting.

All through the arraignment hearing, he found it hard to keep his mind off the previous night spent at Rafael’s apartment. They’d had an instant connection. He groaned to himself as it became increasingly hard to focus.

“Who knows, but how many innocent men do we represent?”Daniel’s stomach knotted. He didn’t want the allegations to be true.

Legally Bound is the first book in J.R. Gray’s Bound series and from what I can tell it was also Gray’s debut novel. Having read and enjoyed the author’s more recent work, it was interesting to go back and visit the author’s early style. throwback thursdayThis book centers mostly around Daniel and Rafael with a strong side of Jesse, Daniel’s work partner, and George, Rafael’s boss and Dominant extraordinaire. There are side stories involving both Jesse and George and there is so much more to uncover there. The set up here is classic with Daniel rolling into work and seeing his hook up looking at him from the wrong side of the law. There is mounting evidence against Rafael and Daniel has to decide what’s real and what’s a set up. He knows he should stay away from Rafael for several reasons, but after one night he craves the dominance that Rafael so effortlessly has over him. We don’t get a lot of background on either man and there is not a lot of insight into the relationship between Daniel and Rafael other than the very real attraction between the men. They have no problem with the physical side of their relationship and both men want Daniel to train as Rafael’s submissive, but there wasn’t a lot of insight given into them falling in love with each other beyond that. With dirty cops on their trail, the men don’t have a lot of time to develop a relationship outside of the bedroom. There is a bit of literary whiplash going on with the men being together and then with one word one of them is ending the relationship only to have the cycle repeat itself. The case against Rafael was definitely interesting. The good guys don’t always get the upper hand and there was a breath holding scene of that playing out. The end of the case wrapped up, but then it didn’t have the same intensity and impact as the case itself. What was most difficult about this book for me was the abundance of descriptors used for the characters throughout the entire book. For instance, Daniel is described by so many terms such as, the lawyer, attorney, male, man, guy, lover, (many of which are used by Rafael himself) and this is constant throughout the entire book relating to each character. It then sounded like the same characters were continually being introduced; it kept the characters at a distance, and became tedious to wade through all of the descriptions to get to the story. I have read Gray’s more recent work and have been able to see the author’s style become more seasoned. I definitely liked the characters presented here, the story that was being told, and there were moments and scenes that were well done. There are many more stories left to tell for Daniel, Rafael, George, Jesse (and his stereotypical wife) and with three more books in the series already published, my interest is most certainly piqued.

Seeing last night’s pleasure as his next case is a real shocker for Daniel Caplin. Never before has he given over control like he did with this man, and all he can think about is when it can happen again. Having a cop breathing down his neck is making it hard for Rafael Argon to earn a living, especially when he keeps getting hauled in on trumped-up charges. Trusting a public defender to get him out of this mess is not easy, although it seems he has no alternative. Getting Rafael to open up about why this cop is harassing him is like pulling teeth, yet Daniel will not give up. He cannot have Rafael going to jail just when he feels like an entire new world is on the horizon. Daniel’s newfound submissiveness is like a drug, making him rash, impulsive, and not at all caring how dangerous a bad cop can be. The last thing Rafael wants is for Daniel to get hurt, considering he is beginning to realize how much he wants him, and only him. The characters in this story absolutely refuse to be boxed in, and it is awesome! A gay lawyer, who is just discovering his submissive side, his married partner, who may be not quite as straight as he lets on, and a Dom that needs to give up a little control and let people help him. They are all sexy, smart, and a bit neurotic, which makes them even more fun. I am very much looking forward to seeing more of Jesse, so hopefully book two takes over where this one ends. - See more at: http://www.coffeetimeromance.com/BookReviews/legallyboundbook1byjrgray.html#.U5O6Xugo5dh

From the first page, this book captured my attention. Daniel Caplin, assistant public defender, instantly realizes he has a problem when his hook-up from the night before winds up being his first defense client in court the next morning. Yet, despite the circumstances of the arrest and the ethical implications of a relationship with a client, Daniel feels an attraction for Rafael, the tall, dark, tattooed Dominant, and can’t seem to stay away. For his part, Raphael is a complex character. Forced into the sex industry at a young age, he is doing his best to go straight (metaphorically speaking). But a vindictive detective with a grudge and past mistakes are standing in his way of coming clean and fully exploring his feelings for Daniel. What I enjoyed most about this book was the interaction between the characters. I found Daniel’s growing relationship with Raphael to be heartfelt and pretty darn hot, and the relationship between Daniel and his legal partner, Jesse, to be amusing, endearing, and just laugh out loud funny. I do wish that the author delved into the BDSM elements more fully as Raphael was a paid Dominant, and I thought that there could have been more detail surrounding Daniel’s exploration of the lifestyle. But the story itself was intriguing, and the political powerplay between the Chicago police department and the underground BDSM scene well crafted. Finding new authors is always a treat for me and J.R. Gray’s Legally Bound was the perfect little snack. A hot Brazilian Dominant, a sexy submissive attorney, legal drama, an actual story, sizzling sex and characters that I really cared about, I am hoping that this story continues beyond just this book.

I have been waiting for this book and I can say it did not disappoint!! The characters are very relatable. Absolutely loved it!! Thanks so much for sharing your book with us!!

I have been very excited for this author&#039;s book to come out and I was not disappointed. The author&#039;s writing style is easy to read and the flow is smooth. The characters are real, easy to love or hate. Some are complicated yet throughout the book you gain a glimpse into their past to help you understand their rough exterior. Scenes were detailed and explained never leaving me to guess what was going on. The two lawyers, Daniel and Jesse are a perfect pair, the kind of partners you wished you worked with. They know each other so well and their little arguments are funny. My emotions ran the gamut with Daniel though as the book progressed. At one point I was almost in tears for him. Did it have to be so bad? Rafael was one character I came to respect the more I read about him. The build up into the character was well done with little details given at a time, he needed to be taken in slowly to appreciate him. I was pleased with how his character progressed. George... the King, was awesome. I can picture him perfectly. Great character and again, learned to like him more than I did as he softened a bit (don&#039;t tell him I said he was soft) towards the end. Respectful with a human side to him. Does the epilogue give us a glimpse to book two I hope? I was overall, very impressed with this book and look forward to more writing from this author. JR, I hope you started on book 2 already. Already excited for the next one!

Breach of Contract by J.R. Gray

Veil of Scars by J.R. Gray

Ever So Madly by J.R. Gray