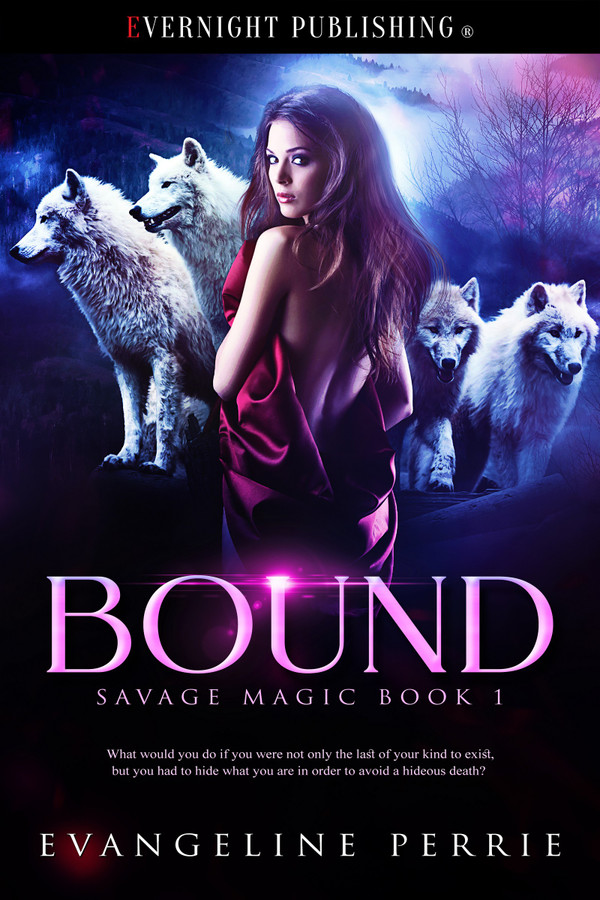 What would you do if you were not only the last of your kind to exist, but you had to hide what you are in order to survive?

For Corinne Parker, that's the reality of her life.

She's a caracal cat shifter forced to live without her magic in order to hide from a wolf pack that wants her dead. Since Cori believes she has no magic anyway, she figures her boring life living in a witch house is all she will ever know. But Cori’s life is about to change when her secret is discovered and she realizes that the four wolf shifters who claim they are her mates are the key to gaining back everything she has lost.

I sighed, rolled onto my back and stared at the ceiling as the credits rolled. “What do you want out of life, Maxie?” I asked.

“Whoa!” Maxie responded, “what’s up with the super seriousness all of a sudden?” she laughed.

I sat up and shrugged my shoulders, looking down at my hands. “I’m twenty-four years old, Maxie. I’ve spent the last twenty years hiding who and what I am from the world. I can’t grow as a shifter because I’m not supposed to be alive and I’m not a witch so I can’t be a part of witch society either. What the fuck am I supposed to do?” I sighed.

Maxie bounced up and looked me in the eye, her expression both fierce and tender. “Cori, quit with the pity party. You’ve made yourself indispensable to the Dome family by majoring in business and working for the family to enhance their worth. You know they wouldn’t do as well without you. No one in Dome thinks of you as lesser because you’re supposedly a witch with no magic. No one.” she said pointedly.

I laughed. “You know that’s not true. I get sidelong glances and snide remarks from some Dome House members,” I said. “I just ignore it because it’s not the Council members or the Keepers, just the peons like me,” I replied.

“You’re not a peon!” Maxie sputtered.

I rolled my eyes and smiled at my best friend. “I’m a magicless “witch” who’s really a shifter hiding out so she doesn’t get murdered by some nameless wolf shifter pack for being “forbidden.” I don’t have any magic, certainly not witch magic, but no Caracal shifter magic either, like the kind that would get me killed. What am I good for?” I responded.

“You’re good for being my best friend,” Maxie replied, more seriously than she usually did in any given conversation. Maxie was mostly a happy witch and very good natured. She excelled at certain magic areas, but wasn’t very high up in the hierarchy. That was just fine with Maxie. She was young and mostly wanted to party, not take life too seriously. Witches lived a long time. She had plenty of time for the seriousness of life. Later. Much later. A response that was dead serious without a joke in it was unlike her.

“I’m serious, Cori. I know you aren’t living your true life, but I can’t live without you in mine. No matter what, you need to figure out how to be happy.” Maxie took my hand and looked up at me again, emotion burning in her eyes. “I need you in my life, Cori. No one understands me the way you do. Or puts up with my shenanigans like you,” Maxie smirked, some of her humor returning.

I smiled, but it had a bit of sadness to it. “I love you, too, you big dope. I guess I’m just .. lonely. It would be nice to have someone—besides you, I mean—to have my back and to love me.” I waved off the protest forming on Maxie’s lips.

“I know, Auggie loves me, too, but it’s not the same. All the time, every day, I am reminded that I am a being apart, not one of you, that I don’t belong. It’s demoralizing, and I wish I had my own pride, my own shifter group to be surrounded by, to be loved by … to belong to, I guess.” I sighed. “It’s just hard, that’s all. I’ll only ever be alone. Maybe I’ll find some male witch who wants me, but it won’t be the kind of male I want, one with that shifter edge, that bit of whatever-it-is that makes him mine…” I trailed off.

Then I laughed, “It’s kind of hard to explain, I guess, since my nature is a shifter one and supposedly we’re more hair-triggered than witches,” I said, shrugging.

Maxie looked at me, with a speculative expression. She wasn’t surprised, though, even though I usually kept this stuff bottled up and I never really complained. Maxie cleared her throat, then smirked.

“No, I get it. Sometimes you just want a guy with a big dick to pull your hair and smack your ass, right?”

I screamed with laughter and said, “That’s not what I meant, you thirsty bitch!”

“C’mon, Cori, yes it is,” Maxie replied. “You told me Jack never really did it for you. You said it was the lying that made it impossible to truly connect emotionally, but what you just described is exactly what you meant. He didn’t have an edge. You need a man with an edge, one who flirts a bit more with his violent nature, but is still gentle with you. I’d say that describes a shifter,” Maxie shrugged.

“Or maybe more than one,” she grinned unrepentantly, as I smacked her with a pillow, another surprised laugh bursting out.

“Tempest Maxwell, what the hell?” I said. “More than one? I don’t even know if I could handle one shifter, let alone two.”

I laughed again and smiled at my best friend. “What would I do without you, crazy woman?” I said.

“Shrivel up and die, girl. You need me,” Maxie replied, and threw her hands around my neck in a death-grip hug. She leaned forward, her lips by my ear.

“When you find them, just remember I’m still your best friend, got it?” she said.

I pulled quickly out of the hug and looked at her. “What? What do you mean, find them?” I gasped.

Maxie shook her head and bit her lip. “You know divination is one of my talents. I haven’t actually seen anything specific, but lately I’ve been getting these impressions…” she trailed off, head cocked, eyes slightly unfocused.

I grabbed her shoulders, my mouth suddenly dry. “What is it, Maxie? What do you know?” I asked. She had never before seen anything in regards to my future. Never.

Maxie shook her head, eyes focusing back on me. “I don’t exactly know what I know. The last couple of months I’ve seen, um, several shifters. They’re unfocused, so I can’t tell exactly what they look like or what kind of shifters they are, but they’re big, all four of them—” she said.

“Yeah, four,” Maxie said dryly, rolling her eyes. “I don’t exactly know how they pertain to you or your future, so maybe they’re not all yours…” she trailed off again.

“But you think that maybe they are … mine?” I completed the thought.

“I think they are all yours in some sense, yes. Maybe they’re just supposed to be part of your pride? And I think that they’re looking for you. After the events of tonight, that feeling has gotten stronger. The problem is that I am not sure what their intentions are toward you yet. They keep changing. Almost like they’re discussing or arguing about you amongst themselves and keep changing their decision or something. It’s hard to pinpoint.” Maxie shrugged. “We’ll figure it out.”

“Why didn’t you say any of this to Auggie when we spoke to him tonight? Or any other time?” I asked her, arms crossed over my chest. I felt a bit put out at not having known pertinent information about my own life that Maxie had clearly been aware of for a while.

“It’s only been something I’ve seen over the last few weeks,” Maxie replied. “I didn’t want to tell you because I thought you’d be scared and I wasn’t sure what to tell Auggie since I don’t really know anything,” she said. “I’ll tell him tomorrow,” she sighed. “We should get some sleep.”

I relented, and we curled up together under the covers. We might be adult women, but we had been having sleepovers since forever and didn’t see the need to stop.

After a few minutes of silence, I said, “They’d better be hot.” Maxie chuckled and hugged me.

I followed the author from Reddit and I love this book. Perfect balance of sexiness and storyline. Just escapism at its best. Just wish I&#039;d waited so I could binge the whole series. Write quickly please!

I really enjoyed this book! It&#039;s an RH so be ready for multiple love interests. I&#039;m a big fan of the fated mate trope and definitely got those vibes from this story line. Definitely will read more from this author &amp; recommend this book to anyone who loved fantasy romance!

Loved reading Bound by Evangeline Perrie. I loved the characters and their back stories. Couldn’t wait to see the main heroine’s power unleash. The instant contraction between Cori and her four men was great. . If you like paranormal romance and reverse harems this series is for you. Loved the interaction between Cori and Maxie as well. Would love to see Nox be more Alpha. Maybe he can take control of a situation or scene to show his true Alpha tendencies and that the others follow his lead. Can’t wait until the next book in the series comes out to see what happens next.

This book is fantastic. I highly recommend it not only for fans of the paranormal RH genre but even those less-familiar fiction readers that want to try something different. What a great escape and incredibly well written. You can really get into the characters. &quot;Book 1&quot;...so glad there&#039;s more to come!!

Wow, I thoroughly enjoyed it! This was my first fantasy book (it is fantasy, right?) and I cannot wait to read the next one!

Bound to Two by Winter Sloane