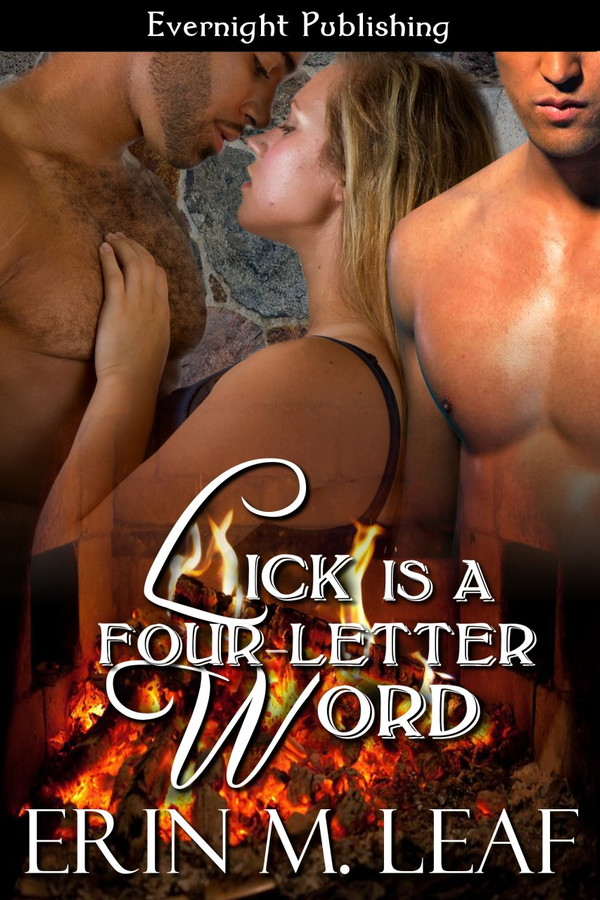 Felicity isn’t looking for love. Since her husband died several years ago, she’s been happy with her quiet life. Josh and Troy aren’t looking for a girlfriend, but losing a bet leads them into a tiny salon room with a broken lock and a nearly naked blonde named Felicity.

When Josh, Troy, and Felicity keep getting locked into small spaces together, the heat between them goes from a spark to an inferno. Felicity isn’t sure she wants to try dating two guys at once, especially when she’s white and they’re not, but there’s no denying the attraction. The two men grapple with their sudden and unexpected need for her, and each other.

Will a secret from Felicity’s past push them away before they come together? Will Josh and Troy be able to convince her they’re serious and that their love is hers for the taking?

Josh grinned. He couldn’t help it. His heart gave a celebratory flip as he moved a little closer. “Cool,” he said.

He nodded. “Yes, very, very cool.” He touched a finger to her cup, then slid it out of her fingers. “Hold this, Troy, would you?” He deposited it in his friend’s hands before Troy could argue and turned back to Felicity. Her hair was done up haphazardly in a messy bun, with small strands escaping all over, and he thought she looked delicious. The pretty dress she was wearing emphasized her generous curves. He wanted to mess her up more. Instead, he gently cupped her cheek, tilting her face up to his. “You ready?” he asked.

She nodded, licking her lips. Her beautiful blue eyes were wary. As he dipped his head down, he wondered what she thought of him, kissing her like this, and then his lips touched hers and all rational thought fled. She made a small, soft sound that went right to Josh’s dick and he deepened the kiss, licking into her sweet, sweet mouth. She let him in, kissing him back hotly. Josh groaned, his cock suddenly hard and aching in his snug boxer briefs. He moved closer, pinning her against the wall. She gasped as his erection touched her hip.

“Still okay?” Josh murmured into her ear. He licked the soft hollow just beneath her earlobe and she nodded.

“Yeah, I’m good.” Her hands were on his arms, trembling. When she slid them up over his shoulders and drew his head back down to hers, his hips jerked, grinding into her. She moaned quietly and he kissed the sound away. Everything around him faded: the elevator, the harsh emergency lighting, the sticky heat. He kissed her until he had to come up for air.

Josh jerked his head around. Oh yeah, he thought. We made a deal to share. He blinked, trying to force his sluggish brain into action. Troy’s hazel eyes had a look in them Josh had never seen before: heated and desperate. Josh could tell he wanted Felicity just as much as he did. He cleared his throat and looked back down at her pink face. “Troy wants a turn.” His cock throbbed against her heat, and he really didn’t want to move away, but he’d made a promise. He always kept his promises.

Felicity glanced at Troy. Josh watched as she licked her lips, thinking about it. When she nodded, he stepped back, letting Troy slot in front of him. Troy pressed the stupid cup into his chest and Josh barely caught it before Troy let go. The heat of his friend’s body had him shivering, despite the temperature of the elevator. He set the cup down in the corner and then leaned back against the wall next to Felicity. He wanted to watch them together. He wanted to watch Troy kiss her rather badly, actually.

Felicity shot him a quick glance as Troy lowered his head. Josh stared into her eyes until they fluttered shut, and then Troy was kissing her, devouring her mouth with the same single-minded ferocity he brought to everything he cared about. Josh licked his lips as he curled his hands into fists. He wanted to touch them. He wanted to slot up behind Troy and press his aching dick into his friend’s spectacular ass. He wanted to kiss them both at the same time. He watched as Troy slipped his fingers into Felicity’s hair and growled. Felicity melted into him, her whole demeanor welcoming.

God, she’s amazing, Josh thought, edging a little closer. He eyed his friend, enjoying the flex of muscles in Troy’s forearms. So is Troy. When his arm touched Felicity’s shoulder, he stopped moving closer and looked his fill. Troy’s full lips caressed her pink mouth, teasing and nipping. Josh pressed his other arm against his dick. It didn’t help at all.

Felicity had her eyes closed and her head back against the wall.

Josh stared at them, body buzzing with arousal.

Josh frowned, not understanding. Felicity had her eyes open now and was looking at him. Her mouth was wet. Did she taste like Troy? Even more arousing was the thought that Troy might have tasted him, Josh, on her lips.

“Your turn again,” she whispered.

Josh blinked. He’d love to kiss her again, but Troy wasn’t moving out of the way. He looked at his friend. Troy looked back, hazel eyes dark with heat. Okay, then. If he’s not going to move. “Yeah,” Josh managed to say, angling his body towards them. He leaned in.

Felicity lifted her face up to his again. Josh’s hands shook as he moved it down her arm, grasping her hand. He gently pulled it up, placed it on his neck. “Yeah, like that,” he murmured when her fingers twisted in his hair. “I like that.”

She smiled at him and he kissed her again, moving in even closer so that his body touched Troy’s all along his left side. He was close enough to feel Troy shudder, but then Felicity bit his lower lip and he lost it. All thoughts of self-control went flying as he shoved against her and his best friend, cock hard and desperate, lips needing to taste her. He kissed like he was dying, like she was air, and then Troy cupped his hand around Josh’s neck, too, and kissed Felicity at the same time.

Their mouths dueled for a moment before settling into a three-way kiss that was hotter than any full-on sex Josh had ever had in his entire life. Troy tasted like Felicity, and like himself, and it was both familiar and completely strange at the same time. Josh’s heart stuttered in his chest when Felicity cupped his face the way he’d cupped hers, leaving Troy’s hand in his hair. When they came up for air, she bit her lip, looking from one to the other.

Josh shook his head. “I don’t know.” He glanced at his friend. Troy was looking at Felicity, lips wet. “I want to do it again.”

Fun and unexpected encounters are all over this story making it interesting and thoroughly enjoyable. There are several story lines going on at the same time but they are so intertwined that it resembles real life. After all, who ever only has one thing going on! Work, play and family all come together as Felicity, Josh and Troy work through attractions and issues left over from Felicity’s husband. Though the husband’s part in this story is a bit lame, the rest more than makes up for it. And, I love the two guys who are such guys……if we ignore this issue, we don’t have to deal with it, right? They also have problems seeing what is right in front of them. However, they have mothers and an aunt to help them. This is very much a multi-racial story with several ethnic backgrounds. This comes across well. Over all, I really enjoyed this story and would have loved to have read more. Interesting characters, realistic situations and lots of love bring this story together making it a perfect story. Felicity isn’t looking for the love of her life. She’s been married and it was okay. Besides, she’s a quiet geeky woman who most men aren’t going to notice. When she gets stuck with two hot guys, she is shocked that they even notice her. After all, not only are they hot, they are a bit younger than her. Josh and Troy are attracted to the woman they just met but forgot to get her phone number. Several days later though, they remember when once again they are stuck with her. They aren’t sure how it’s going to work with both of them wanting to date Felicity but it gets even stranger when she has them kiss and it feels good. What’s going on? Isn’t strange enough that they both want to date the same woman?

The chemistry between all three lead characters is amazing and builds up so nicely through the book. One gets pulled in both by the heat and sexual exploration between the three, but still there is room for getting to know their personalities, which is an equally interesting part of the story. I also love how the author has balanced the relationship between the three, so they are all one equal third of the relationship (a personal favorite of mine), rather than two sharing a third.

Loved it! Felicity is on her own for the 1st time of her life. She lived with her parents then moved in with her boyfriend who became her husband. In a mysterious hit and run he was killed and she was crippled. Now for 2 years she has grieved and now just works and spends time with her friends. She decides to go out and do something for herself. A bikini wax, will make her feel pretty. Josh and Troy, best friends since childhood, both lost there fathers at a young age and now there families are both very close, almost like family. Both have feelings for one another but neither will show one another how they truly feel. Both like women, there families are suspecting there may be more between the 2 men. When they lose a bet with a sister, they have to go to a beauty salon. Sitting in the room naked with only a paper gown to cover up with, gets them talking but when they get locked in the room with a beautiful woman, things really heat up. One encounter, is not enough, for the men. And Felicity&#039;s libido gets turned way up in a big way. She is turned on more in those few minutes with the two men than she has ever been. But will something from the past put them all in danger. This was a really HOT book. Talk about a build up. The chemistry between the 3 is smoking and I could not put it down. The story of all 3 really draws you into the story. You feel Felicity&#039;s pain from the loss of her husband and the attraction that is denied between the 2 men. Josh and Troy are great together but with the addition of Felicity to the mix...explosive. I will say it again HOT!! great story loved it.

Risk is a Four-Letter Word by Erin M. Leaf

Kiss Is A Four-Letter Word by Erin M. Leaf