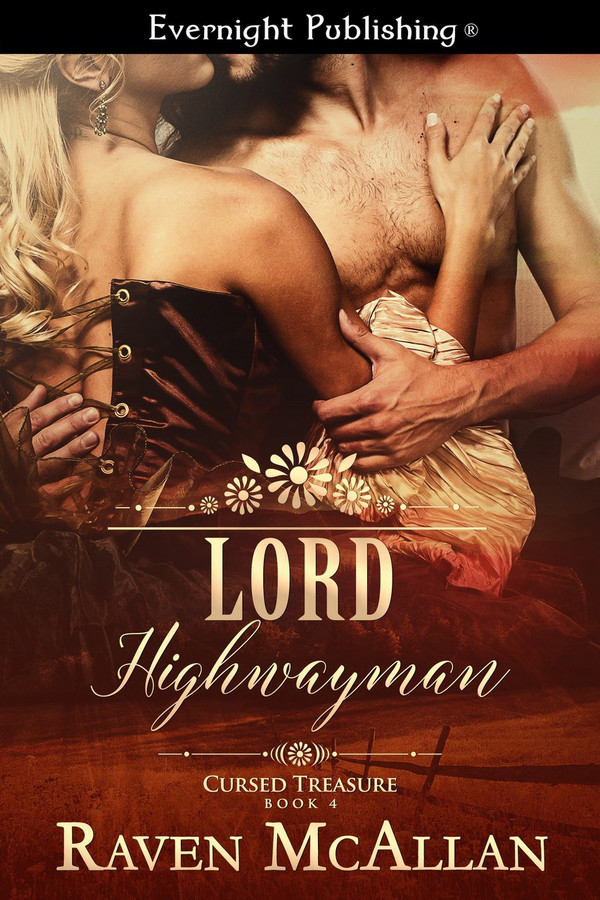 When Lady Marielle Birch is kidnapped by a highwayman, neither she nor he knew what the outcome would be.

Thrown together when Marielle shoots him, her aristocratic captor, Sylvester, The Earl of St. Stephens, knows he's in deep trouble. After all, how could he not fall in love with her and want her for his wife?

Never mind that, if they didn't wed it would be the scandal of the century.

Shivers teased her spine as she moved and stood either side of his legs. To her embarrassment a gush of heat filled her and she’d swear her quim was wet with desire. Was that proper? Should it be like that? It wasn’t something she felt she could ask … yet.

Marielle perched on his thighs. Vester lifted his hot and wet cock until it rested against her perspiration covered tummy and stroked her skin.  The hairs there stood on end. She wriggled. He stilled her by the simple method of touching her breast and pinching her nipple. She gasped and groaned. That was way too exciting for comfort.

“See how I want you?” he asked in a deep velvet voice. “The evidence coats my cock. That will aid us, you know.” Vester bent his head and kissed each of her nipples in turn.

“It will?” She gasped as he suckled the hard nub into his mouth. “More.”

He chuckled and it reverberated through her.

“There is so much more, love. Are you ready?”

Get on with it before I lose my nerve. “Oh yes.”

“Then let me show you.” Vester nudged her arse up from his thighs just enough to slide one long finger over her nub and stroke her labia. Her muscles tightened, inviting him further. Marielle moaned. It was so arousing: her body was on fire as liquid heat flooded her and her skin tightened to the point of pain.

He added another finger, then another and moved the digits up and down until she swore she saw stars. “Argh…” She convulsed around him and fell forward onto his torso, with his fingers still embedded deeply inside her.

How long they stayed like that. Marielle had no idea. When she finally decided she was able to think coherently she sat up, put her hands on Vester’s shoulders and wriggled.

His fingers were still in her channel.

Vester grinned and put his lips to hers. His tongue teased until she opened her mouth and that organ slipped inside to mesh with hers and create even more of those nerve tingling stings. Without breaking the kiss, Vester removed his fingers, and tapped her arse twice. The loss of contact was like a cold bath and she tried to lift her mouth to ask why. There was no need. Before Marielle had time to say anything something probed the opening of her channel.

No, not something. His cock.

Gently and so titillating, she thought she might faint, he pushed her upright. “Hold on to my shoulders and get ready to ride.” Very slowly he edged inside her.   He was big, and for a brief second she panicked before reason over took her. He’d know what to do. If he said it would work, then somehow it would. She might not be able to see that for herself, but trust had to begin somewhere. This seemed to be it.

“All right?” He stayed where he was—a scant inch inside her, his good arm on her arse, his injured one propped against her waist.

Vester lifted his uninjured arm and stroked her sweat-slicked brow, edged a curl behind her ear and pinched the lobe.

“Then all you shall have.” Vester thrust hard. A sharp pain seared into her and she screamed.

That was supposed to be enjoyable? Whoever thought that should be a candidate for Bedlam.

Vester stilled for one second, and massaged her shoulders. Probably, she decided, to stop her running.

“That’s it love, that’s the only pain. From now on you’ll scream with pleasure.” He began to move again.

On the way to visit her godmother Marielle is kidnapped. Having sent her maid off she was travelling alone and her only protection was her small hand gun and her coachmen. But her kidnapper believed she was someone else and was whisked off away from safety. But not before she gets a shot in and shoots her captor. Vester is now stuck with a woman who he doesn’t know, shouldn’t be there, and is suffering from a gunshot wound thanks to this mystery woman. When he falls ill Marielle does everything she can, he’s sick because of her after all. But when one day’s turns into four and he finally awakens, he knows that in order to maintain her honor he must do the only thing he can, marry her. But there is no way is she is going to marry him, it goes against what she believes. She is determined to find a way to get out of this marriage. When she finally makes it to her godmother is, with Vester with her, and her parents arrive a few days later will she be able to get out of this marriage or will they stand with her and what she wants. And if she does have to marry will it because he feels a duty or will he do it because he loves her. Raven has a great ability to make you love and hate the characters at the same time. You want the happily ever after but you also want to get a few slaps in. I love the continuing family dynamic and hope to read more in this series in the future