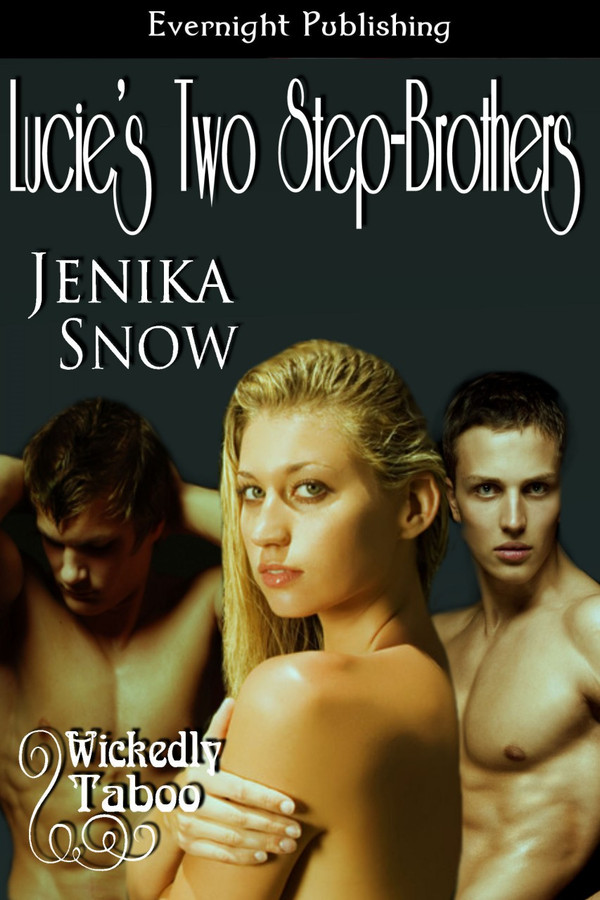 Lucie not only has to share her house with her new step-father, but also his two sons. Emery and Quentin aren’t the typical boys Lucie goes to school with, not with their towering heights and muscular frames. As her annoyance for her two step-brothers slowly diminishes, and a fierce arousal settles in, Lucie knows that she isn’t going to be able to resist their advances for long.

“Yes.” The single word fell from her lips. Quentin didn’t wait for another invitation. Moving with the grace of a wild animal, he crawled onto the bed and between her splayed thighs. His wide shoulders forced her to spread her legs even wider to accommodate his massive frame. Stomach hollowing from the feel of his warm breath across her clit, Lucie bit her lip when she finally felt his tongue swipe across her pussy.
He groaned against her flesh before murmuring, “Your cunt tastes so fucking good.”
Quentin continued to lick and tongue her cleft. He flattened his tongue against her, moving it from the opening of her pussy to the very top of her clit. The sensation had her shaking, but his hands pressed on her inner thighs and kept her stable, somewhat.
Lucie opened her eyes when she felt the bed dip beside her. She could see Emery’s stormy expression as he moved closer and closer, until he was right beside her. Keeping her eyes open was a feat that seemed almost impossible to accomplish. The pleasure Quentin wrought was mind-blowing. When he entered a finger into her pussy, her back bowed and her climax rose precariously close to the surface. Emery gripped her chin between his thumb and forefinger and tilted her head up.
“Brace yourself on your elbows.” He rose onto his knees, his shaft standing stiff and big right in front of her mouth. When she did he said, “Put my cock in your mouth, Lucie.” He gripped himself with his free hand and led his dick to the opening of her mouth.
The moist, thick head rubbed along her lips, coating them with his silky pre-cum. She darted her tongue out and ran it over the swollen head, tasting the saltiness of his semen. The flavor was purely masculine, potent even. Quentin’s fingers and tongue were wicked and Lucie couldn’t hold onto the moan that spilled from her mouth. The vibrations had Emery gripping each side of her head, her hair in his fists. A glance into his eyes showed his strength was breaking.
She moved her tongue along the underside of his cock before bringing it back to the opening at the tip and pressing her tongue inside. The only thing that mattered at that moment was feeling Emery’s cum shooting down her throat. Despite wanting to accomplish this and taste him, Quentin was making her feel so good that she could barely concentrate on her task.
Emery started moving his hips with more force. He pushed his dick into her mouth and pulled it back out. She could feel the thick vein that lined the underside of his erection rub along her tongue with every move he made. Over and over he did this, slowly increasing his speed until the tip of his shaft was hitting the back of her throat. He groaned above her and tightened his hold on her hair. The small jets of cum that filled her mouth let her know he was close.
“Suck his cock while I lick this pretty pussy.” Quentin’s deep and harsh words brought her orgasm closer to the surface. Without thought, she found herself lifting her hips and pressing her cunt into his face. She needed more of him, needed to feel more of that wicked tongue teasing her clit and pressing into her hole.
Emery gave a deep growl and stilled his thrusting. Jet after jet of hot, salty semen filled her mouth and she greedily swallowed. The taste of him was potent and extreme. When his cock went limp he pulled out and leaned back on his legs to stare down at her. Sweat dripped down from his hairline and his cheeks flushed.
The feel of Quentin latched onto her clit and three of his fingers shoved deep within her had her arching her back and reaching for the pleasure that was sure to follow. The suction was intense and his thrusting digits were fierce.
Quentin broke away from her and murmured, “I want to taste your orgasm, Lucie. I want your cream all over my face.” He then latched back onto her pussy and had her screaming out in ecstasy.
She knew what she looked like: back arched, breasts thrust forward, and legs as wide as they could go. Warm fluid seeped out of her and coated not only Quentin’s face, but also her thighs. When she couldn’t take anymore, she gently pushed Quentin away and breathed in deeply. Lucie didn’t even have the strength to open her eyes and see their reaction. Would they think she was easy? A slut? She didn’t do things like this, especially not with two men.
She opened her mouth to say something, but no words came forth. It wouldn't have mattered anyway, not when Quentin rose to his knees and positioned himself between her splayed thighs.

this book was ok. I liked the characters but I just wish the story were a little longer and had a little more substance to it. it was still good just not too terribly deep.

This book was not what I was expecting. Everything changed when Lucie&#039;s mother married Quentin and Emery&#039;s father. Quentin, Emery and Lucie grow close, but their father&#039;s behavior changes and everyone sees a different side of Edward. This is so good it is a must read!!

A delightfully wicked little erotic story, with a little bit of a plot. The sex scenes are steamy and plentiful. Lucie’s mom remarries when Lucie has 1 year of school left. Edward and his 2 sons, Ethan and Quentin move in, which Lucie resents. Edward is hiding a secret about his late wife, and he’s an abusive alcoholic. He began beating Lucie’s mother while on their honeymoon. Lucie and her two step brothers begin their affair almost as soon as Lucie’s mother and their father leave for their honeymoon. The only thing I will say about the ending (so I don’t ruin it), is that almost everyone has a HEA.

Lucie is eighteen and about to enter her final year of high school when her mother shocks her by announcing that she is about to re-marry a man Lucie was not even aware her mother was dating. Not only will her soon-to-be stepfather move in with them, but also his two sons, both close in age to Lucie. Although she is angry with the entire situation, she soon finds herself lusting after both young men, and when their parents leave for their honeymoon, the three young adults come together in a combustive fashion. For a short novella, this story packs a punch. The sex scenes between Lucie and her new step-brothers, Quentin and Emery, are very hot, both the threesomes and the one on one encounters. Although the overall focus is on the delightfully sinful aspect of the step-sibling taboo and threesome-ness of the story, there is also a mystery of sorts that allows Lucie&#039;s character to be filled out in more than just the object of Quentin and Emery&#039;s desires. The angst underlying Lucie&#039;s doubts about Edward, her new step-father, and the way he treats her mother and Lucie herself, foreshadow nicely the way the story plays out. I was happy with the ending, although I would have loved for the story overall to be longer, or to get another look at their relationships farther down the road than just one year later, as in the epilogue.

Lucie is hurt and mad that her mom has decided to remarry. She likes things the way they are, just the two of them. The day that Edward and his two teenage sons moved in was one of the worst days ever for Lucie. There&#039;s something about Edward that just doesn&#039;t sit well with her. Over the next few weeks, Lucie starts secretly watching the boys lift weights, getting turned on. When her mom and Edward leave for their honeymoon, the boys put their own plan into motion. A little bourbon and two hot male bodies is more than Lucie can deny. The trio make love night and day and grow closer. When the couple returns home early, Lucie is horrified to see her mother with a black eye. Her mom explains away the injury as clumsiness, but Lucie knows better. Edward starts drinking heavily and her mother falls deeper into depression. Lucie knows that something is not right and goes snooping in Edward&#039;s things to find answers. He catches her and as he attempts to rape her, the boys come in and stop him. They fight and Edward is knocked unconscious. When the smoke clears, Edwards is arrested and her mom is found beaten and bruised. Now that the nightmare has ended, can they recover and move on? This story is very heartbreaking and unfortunately is happening every day. Many new families are formed from remarriages or previous relationships. Sometimes the transition is smooth but other times it can be disastrous as demonstrated in this story. I liked that the heroine was willing to put herself in harm&#039;s way to protect her mom and that the boys did the right thing in helping to stop their dad. It&#039;s painful to watch a child have to side against their parent and is a situation that shouldn&#039;t happen. Reviewed by: Pam S.

Being with the Brothers Next Door by Jenika Snow