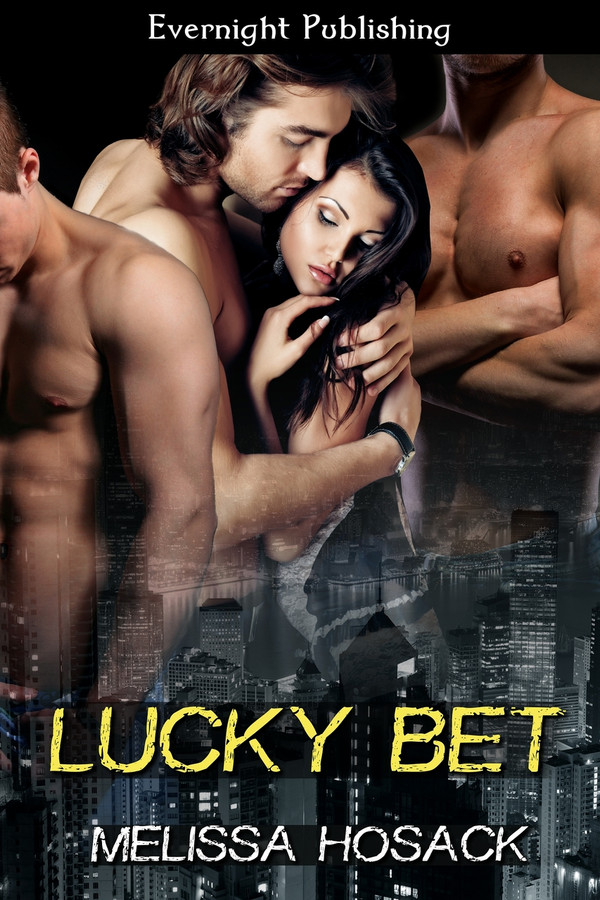 Losing A Bet Has Never Been So Fun…

On a trip to the casino, Sam and her three college buddies (Dex, Charlie, and Jackson) find themselves making something they refer to as “exotic wagers”. They propose odd bets within the group, performing outlandish dares if their spins on the machine produce a profit. The bets get silly, and the friends become outrageous with their challenges. Jackson, Sam’s best friend and old college roommate, throws out a dare for her—if she wins big, she has to sleep with all of them.

After a wild night in bed with the guys, Sam finds herself plagued with thoughts of Jackson. She thinks she might be falling in love with her best friend, but can she convince him their night together was more than just some silly bet?

“Stop it,” Dex demanded. “Don’t think. Just do.” He arched a brow at her. “This is meant to be fun, Sammy. Don’t you dare think it to death. Shut off that big brain of yours and just have a good time.” Grabbing her by the waist, he walked her backward until she was pressed against the wall of the elevator. He ground his hips against hers, then lowered his mouth to hers for a bruising kiss.

Sam gasped in surprise, but her body responded, her hips thrusting back against his. She returned his kiss, feeling excitement race through her. She wanted this. She wanted to have sex with Dex. That revelation filled her with shock, but she didn’t fight the truth of it.

The elevator dinged, and the doors slid open. Dex pulled away as quickly as he’d pressed her against the wall. With a bawdy wink, he sauntered out of the elevator with Charlie following behind.

Sam went to trail after them, but Jackson grabbed her arm and pulled her to a stop. He turned her to face him, worry in his eyes. “Are you sure you’re okay with this, Sam? If you’re not, just say the word and I’ll call an end to it.”

She took a deep breath, then nodded her head. “Yeah, I’m okay, Jackson.” To prove this point, she stood on her tiptoes and wrapped an arm around his neck. Tugging his head down to hers, she kissed him.

She moaned softly and opened her mouth to him, her nails scratching gently at the back of his neck. She’d never envisioned kissing her best friend before. If she had, she never would have imagined it would be so good. Jackson kissed her in a way that made her feel it all the way down to her toes. The way his hands stroked along her hips made her itch to strip out of her skirt right there in the elevator.

“Hey!” Dex ducked his head back into the elevator. “You guys coming? Or you gonna’ keep having fun without us?”

Sam broke away from Jackson with a guilty, nervous laugh. “We’re coming.” She glanced up at Jackson for confirmation.

Squaring her shoulders, Sam marched out of the elevator toward her hotel room. She was about to have sex with her friends. She tried not to think too much on that. She’d already committed to this. She wasn’t going to back out now. Besides, she didn’t want to. Miss Uptight was about to do something irresponsible and fun. Consequences be damned!

Lucky Bet by Melissa Hosack was a delightful, quick read. I was impressed with how Ms. Hosack was able to pack a surprising amount of story and sexual into just a few chapters. Lucky Bet puts an interesting twist on the traditional friends to lover stories. Sam and Jackson have been best friends ever since she was accidentally assigned to be Jackson’s college dorm roommate. They work for the same company so their friendship has only gotten tighter over the years. They head off to Vegas with two other college buddies for a weekend of fun and gaming. The four of them decide to make some exotic wagers to add spice to their weekend. Sam loses her bet which results in her agreeing to a ménage a Quattro. After a hot night with her male friends, Sam finds herself thinking of Jackson differently. She begins looking at him as a lover instead of a friend but she doesn’t know how Jackson feels. Will she lose his friendship or gain something special? I really liked all the characters in Lucky Bet. In fact, the three men were so well-developed and appealing that I wished I could have been in Sam’s shoes. Ms. Hosack wrote some unbelievably hot sex that left me wanting more. Yet she didn’t skimp on the characterization. Sam and Jackson were authentic and their concerns were very realistic. It’s a scary transition from friendship to lovers and I completely understood their fears. This is the first book I have read by Ms. Hosack and I am excited to have found another author I can enjoy. If you’re looking for something good to read while you’re waiting for your drink to chill, then Lucky Bet would be a good gamble.