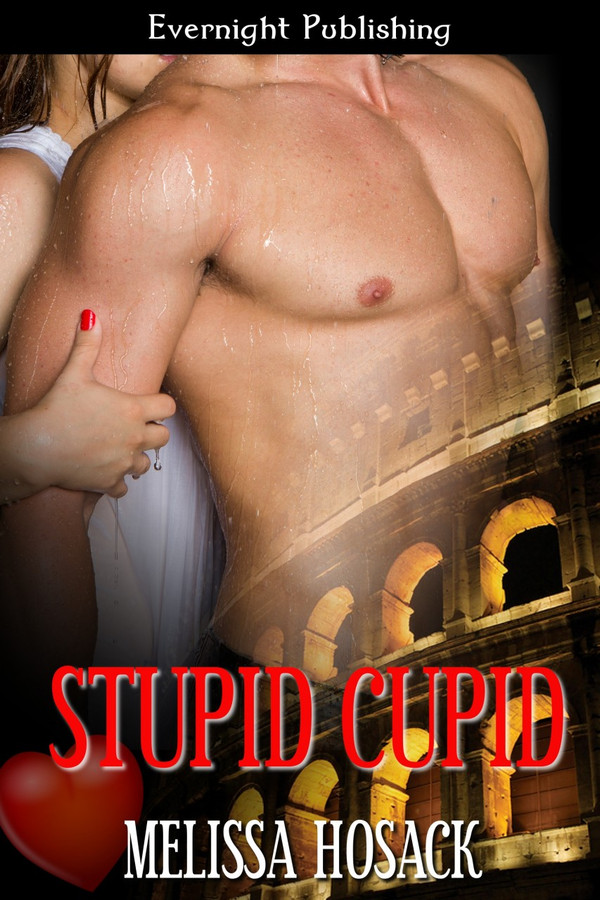 Turning thirty is a depressing affair for Lincoln Belmonte. Thirty wouldn’t seem quite so bad if she wasn’t single, lonely, and a world away from her projected plans. She’d expected to have a husband and children at this point in her life. Instead, she spends her evenings in solitude.

Staring down at the burning candles on her birthday cake, Lincoln makes the wish to be able to tell off Cupid. She wants answers from the man who has caused her to be jilted in love time and time again. Feeling better after her silly wish, she puts it to the back of her mind.

The next morning, Lincoln wakes up in an unfamiliar house in an unfamiliar bed. A little birthday magic saw it fit to bring her together with the man responsible for all of her problems.  She is rewarded with the chance to take out her frustrations on Valentine’s holiday figurehead—Cupid. Only once she meets Valen, Lincoln can’t decide if she wants to give him a piece of her mind or seduce him.

As she approached the door in front of her, Lincoln heard the unmistakable sound of a kitchen. Whoever was on the other side of the door was cooking and seemingly having a really good time of it.

A male voice belted an oldies tune accompanied by the clang of pots and pans.

In disbelief, she pushed open the kitchen door and tiptoed inside. The man whose tenor filled the room had his back to her, but he was good looking even from this angle.
His shoulders rippled with muscles beneath a fitted black t-shirt. His jeans were so tight, it was impossible not to stare at his backside. He had a gorgeous mane of shoulder length blond hair pulled back into a ponytail.
Lincoln stared transfixed. Her kidnapper was not only rich, but he was better looking than her original guess of Brad Pitt. As confusion whirled through her mind, the man finally turned around, drawing a gasp from her throat.
Violet eyes dominated a masculine face. His cheekbones were high, his jaw sharp and prominent. And he looked completely pissed off at her presence. “Vandal!” he accused loudly.
“Kidnapper!” Lincoln shot back.
“No good, thieving…what?” He’d been stomping in her direction with ill intent when her accusation seemed to sink in.
“No good, kidnapping…stud.” She blinked at her choice of description.
“Kidnapping stud?” the man roared in incredulity. “I didn’t kidnap you!”
“Then why am I here?”
He gave a derisive snort. “You tell me, honey. I have no idea.”
Lincoln frowned at that. As much as she wanted to peg him as the bad guy, it didn’t make much sense for him to kidnap her. He was obviously wealthy, and he was extremely good looking. Why would he need to kidnap a thirty-year-old bachelorette?
Apparently sensing her confusion, the man let out his breath in a put upon sigh. “What’s the last thing you remember?”
“The last thing I remember is going to sleep,” Lincoln said slowly, “in my own bed.” There was a bit of sting to the second half of her sentence. As unlikely of a kidnapper as he was, she still found it hard to believe she could have wound up here without his interference.
Mr. Yummy turned his back on her and returned to his cooking. “Did anything unusual happen last night?”
At his unthreatening demeanor, Lincoln shrugged and sat the candle holder down as she slid into a seat at the kitchen table. “Not really. I went out with a few friends to celebrate my birthday.”
“Were you drunk?” He reached above his head into a cabinet to pull down two plates.
She gave him a sour look. “I’m thirty, not twenty-one. I had cake. Period.”
“No ice cream?” he asked with surprise.
“No.” She gave him a peculiar look behind his back. “For your information, I don’t really care for ice cream.”
“Then you’re not eating it right.”
Lincoln gave him a dirty look but chose not to comment.
The man turned from the stove with two plates of food in his hands. Making his way over, he placed one in front of her before sliding into the seat across the table. “What did you wish for?”
“I beg your pardon?”
“You said you had cake. I’m assuming there were candles and singing as well. What did you wish for?” He arched a brow in question and held a fork out to her.
“That is none of your business. A wish is personal.” Despite her defensive comment and haughty tone, she snatched the fork from him.
“Come on,” he wheedled as he shoveled a forkful of scrambled eggs into his mouth. “A wish can be a very powerful thing. Let me hear it.”
Lincoln lifted a slice of bacon from her plate and stared at him over it. “Oh, all right,” she finally said with a huff. “I wished I could meet Cupid, so I could tell him what a jerk he is to his face.” She rolled her eyes with a snort. “I wanted to tell him off.”
He was suddenly choking on his food. He grabbed for the carton of orange juice in the center of the table and downed half of it in three long gulps. Coughing, he pounded at his chest. “That’s quite the wish,” he finally managed to wheeze out.

Melissa Hosack brings a winter holiday hero from fantasy into scorching hot reality with this erotic romance. Lincoln Belmonte is not happy yet she doesn’t come across as whiny or annoying, simply frustrated with her life, like many people are. Seriously what single lady hasn’t fantasized about giving Cupid what for? I loved that she got her chance to tell the little love god off. I was hoping for some more fireworks when she finally met the guy but I did enjoy that he wasn’t quite what she was expecting. Valen is a fantastic hero and I loved how he performed his duties as it was a fantastic take on a modern way to get the job done. The heat between these two is definitely there and I loved witnessing the intense moments between them. I really enjoyed meeting Lincoln’s best friend and would love to see her story told in detail. I would enjoy seeing this author take on the challenge of some other mythological characters and bring them in to the present. This was a quick, fun, pleasant read. As Lincoln Belmonte looks down at the candles on her birthday cake as she turns single she realizes only one person is to blame for the unhappiness in her life. Cupid. So she wishes to tell the guy off, after all he’s responsible for every broken relationship in her life and the reason she’s still single. So the next morning when she wakes up in his house, in his bed, here’s her chance but one look at Valen and she can’t decide whether to give him a piece of her mind or her body!

This book was a great easy fun read. I highly recommend it.