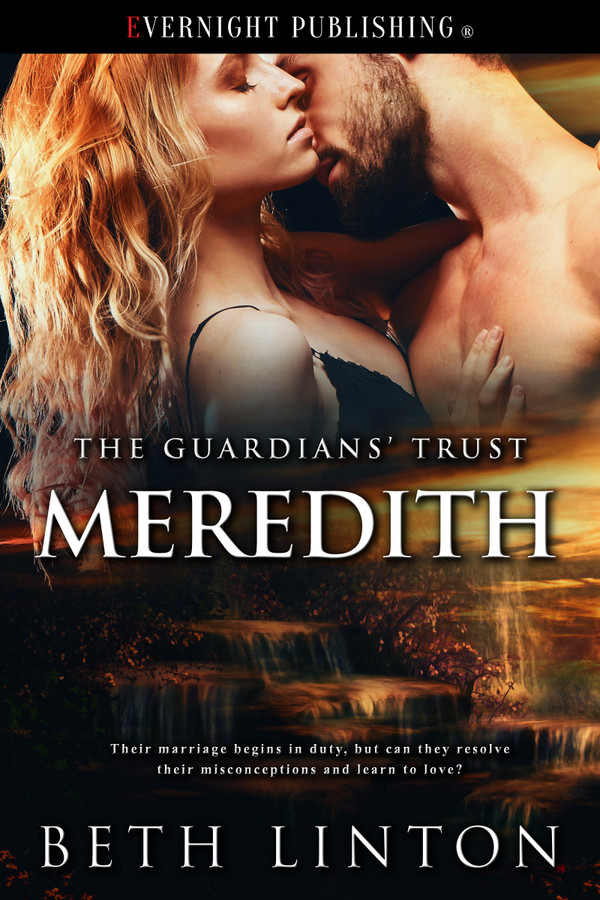 Some women are born identical—one in the human world, one in the jungle of the Other Realm. It is their fate to change places. Book four of The Guardians’ Trust series tells Meredith’s story…

SHE TRUSTS HER DESTINY

Spiritually devout, Meredith departs the realm of her birth to marry the man born for her. As an artist, she embraces her new life with her arranged husband and eagerly anticipates the passion she knows will be theirs—but having left the Other Realm’s Resistance, she’s surprised to face his.

Cole refuses to rush headfirst into their relationship. Determined to do the right thing, he struggles to suppress his desire for Meredith and give her what he feels certain she needs—time to adjust to the human world, and him. Their marriage begins in duty, but can they resolve their misconceptions and learn to love?

Pushing open the door to the en-suite adjoining the bedroom that would now be Meredith’s, Cole continued to have firm words with himself. The glimpse of thigh he’d gained as she’d climbed out of the Jeep had catapulted him back to the lust he’d felt when she’d emerged naked upon the rocks of the gateway. Inappropriate lust, he reminded himself for the umpteenth time as he pointed out the shower, bath, hairdryer, and towels. She’d looked like a goddess confused by her first experience of the frozen human world she’d stepped into from her hot, spiced heaven, but he was no inexperienced boy. He wasn’t impulsive like Maxen, another member of the Guardians’ Trust, and he certainly didn’t lust after women he’d just met. At twenty-eight, he was more than capable of shelving his desire for his future wife until a more appropriate time.

He silently cursed when Meredith slipped by him, her robe-covered breasts brushing against his arm as she passed. He stiffened and silently counted to ten when she remained close as she looked about the room with apparent interest. He definitely didn’t need to imagine her showering … naked … covered in soap suds and—

With an abrupt movement, he crossed to the shower and turned it on with more force than was necessary. As steam billowed, he stepped back and almost collided with her.

“Sorry, I…” He swallowed when her hands went to the belt of her robe. “I should…”

Hungrily, he followed her fingers as they loosened the knot of the belt.

“Don’t go.” Slowly, Meredith eased the robe wide and then shrugged it off. With her naked before him, the air heated with more than steam.

When she passed the robe to him, he took it automatically, his mouth dry. Her body was a dream come true. Slender and toned, but softly feminine and curved. Her breasts were perfect, full and high, pale-tipped. He desperately wanted to—

Ordering himself to think chaste thoughts, he jerked his gaze away, and it landed on where her bare toes wriggled on the polished wooden floorboards. He suppressed a groan. Heaven help him, he even found her feet sexy.

His gaze bounced back up, searching for deliverance, and connected with her shoulder. From shoulder to wrist, her right arm was an intricate design of swirling shapes, a tattoo of great skill.

He grasped the distraction gratefully. “Does this have meaning?”

She lifted her arm, the movement jostling her breasts. When he cleared his throat again, Meredith arched a brow but didn’t comment.

“It signifies the end of my training and my graduation to aesthete artist. I designed the pattern myself after seeking guidance within Affinity.”

“An aesthete artist,” she said. “I completed several years of apprenticeships before I was entitled to wear this marking. My training ended shortly before I came here.”

Reaching out, he traced the inked lines with his fingertip, absorbed. “I’ve never seen such a design.” Nor had he known of the practice amongst the Resistance to give tattoos to signify status in various professions. He took in both the knowledge and the pattern, keen—as always—to learn more about his Other heritage.

“As you know, the members of the Guardians’ Trust are descended from the human-Other pairings of the first set of Exchanges several centuries ago. I value my heritage: both my human and Other sides. I’d like to learn more about your training, about how you obtained this marking.”

She smiled at his genuine interest. “I’d be happy to tell you anything you’d like to know.”

His finger followed an inked line along her bicep, the need to know more about this buried side of himself prodding, but he dropped his hand. “I should let you shower. You must still be cold.”

She looked from Cole to the shower stall. Steam now clouded the glass. “I would like to get warm, but you got cold, too. Join me?”

He swallowed hard, his gaze dropping to her breasts before he forced it back up. “I don’t think that’s a good idea.” She was offering to share a shower with him, not her body, and he was an ass for even thinking about sex when she’d just left her home and her life to marry him—a stranger. “You shower. I’ll wait outside.”

Meredith’s head cocked to the side, her brown eyes watchful as she seemed to consider his refusal. “All right,” she finally said, “I’ll shower alone.” She tugged open the shower door and stepped inside. Hot water sluiced over her body. Sighing, she tipped her face into the spray.

Cole watched as water made her skin slick, her breasts shiny. She was stunning, beautiful—and inside him rose one lust-filled thought: she’s mine.

When he failed to suppress a groan, she opened her eyes and their gazes met through the glass. She lifted a brow. “You’ve changed your mind?”

Within his jeans, he was aching and hard—and his desire shamed him. If he stripped and joined her, she would see that he wanted to do far more than share an innocent shower.

Clearing his throat, he forced his gaze away. “I’ll go and get you some clothes.”

And as he turned to the door, he made a silent vow to them both: he’d go slow and show her every respect. He would give Meredith no cause to regret coming here to the human world, or to him.

Another fabulous story in the series where Beth flawlessly moves from the Other Realm and Earth, giving complete focus to each Double&#039;s journey. And with the plot continuing to develop, there is so much more in store!