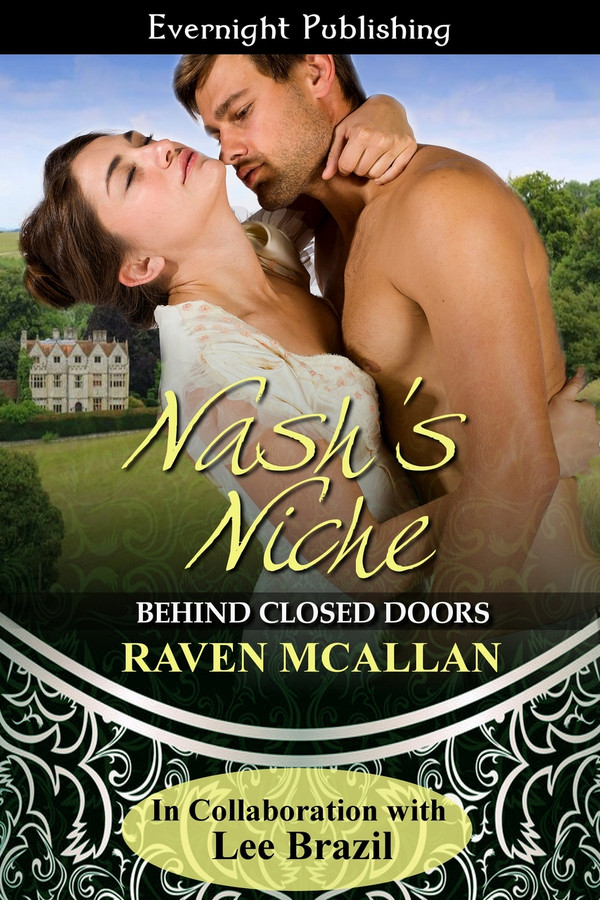 A chance meeting at a masked ball leads to explosive and unforgettable sex for both Nash and Felicity.

Reunited under dangerous circumstances, they realize they may have to fight for their love, especially when Felicity is promised to Nash's brother.

With the future of the country at stake and unsure who to trust, can there be a happily ever after for the star stuck lovers?

His decision made, Nash lifted her from him. "Stay there whilst I get what we need." He collected cloths and water, scissors and razor, in short shrift. "So where shall we mark? I thought here." He ruffled the curls that covered her quim. "As close to heaven as we can make it."

She nodded and sighed. "How beautiful. Will you mark yourself the same?"

He shook his head and she went ashen. "No, I won't mark myself. You'll do it for me. I will however do the shaving. I'm not sure how well you would operate a cut throat and strop, and I need my cock and balls to fill you again."

Her color returned and she giggled, even though her eyes were still shadowed by some indefinable sorrow. "Then who'll begin?"

"It is usually ladies first. Let me shave us both whilst you decide on the design." He cut her curls as short as he could. Her eyes widened as the cold steel skimmed over her skin. It seemed his lady was oh so receptive to that cold touch. If only he had some ice he could introduce her to many more sensations. Nash let the closed blades stroke her cleft, and laughed softly as she gasped and took a deep shuddering breath. It was with reluctance he put the scissors down and picked up the razor and strop and denuded a small circle of hair just above the entrance to her channel. He wanted to pin her under him, and tease every last inch of her with the chill of anticipation before showing her how heat and cold could work so well together.

She didn't move but watched him with wide eyes. Each scrape of the steel, each tiny piece of skin that showed under his blade, brought more tiny drops of perspiration to her skin. Her body had taken on a soft rosy sheen, her eyes cloudy with desire, and Nash wanted her with a need so fierce it took his breath away. Carefully he set the razor on the table and moved, to thrust his tongue between her lips. She met it with a determination to match his, and then to his delight, pinched one of his nipples. He had to force himself to move back.

"If we carry on no ink will be used, and you will be bare for nothing." Was that thin, reedy voice really his? He needed to get a grip on his emotions.

"Never for nothing, but I do wish to see it finished." She sounded as disturbed as he.

Nash ran his hands over his head. He needed to stop them shaking. Then once more he bent to his task. When he'd finished, she rubbed her hands over the area.

"It feels so different, in a very good way. Now you?"

Madame Felice rolled her eyes. Even with only tiny holes cut in the mask the gesture was obvious. "Like this do you mean?" She set her mouth to the head and licked the juices there. The delicate scrape of her tongue was spine tingling. Nash could hardly remember what he was supposed to be doing.

"Not if you want me to finish the inking," he managed to say.

She lifted her head, and his cock slipped out of her mouth with a tiny pop. "A pity, I was beginning to enjoy myself. Perhaps we will both be better satisfied if I just hold it," she paused. "For now."

"Perhaps. Please." He couldn't form any more words in a coherent form, as she took hold of his horn, and held it firmly with both hands.

"Concentrate, 'tis your turn to be prepared." She lifted one finger and waggled it at him. "Then we can both be rewarded."

Nash took a deep breath and steadied himself, before he set the razor to his skin once more and made short work of his removing his own hair. Satisfied, he set the cutthroat and strop back onto the table. "So what are we inking?"

"Two hearts entwined." She sniggered. "Ah so trite, but oh so true. You have made me realize I have one, and now I have shared it."

If he hadn't been entranced with her, that sentence would have done it. As it was an inferno of sensations filled him, and he vowed he would find out more about his lady. The words 'his lady' hit him. He knew they were true.

She touched his arm. His cock jerked and protested at the reduction in contact.

So was he and not just for a tattoo.

"Then try to relax." With careful precision he set the needle to her skin. Her fingers tightened on his cock, and she gasped and bit her lip but didn't move.

"It will sting," Nash warned her. "And I will need to break the skin many times." He inserted the ink into the tiny needle prick, and made several more before she had time to voice her thoughts. Her hands were tight, but not uncomfortable on him.

"It is a sweet sting, My Lord. It marks me as proud to be as one with you." Her softly spoken words filled him with a fierce heat. He needed her again. But not, he vowed, until they were both inked. Then to spare their marks he would show her how many other ways there were to make love.

Nash bent his head and applied himself to his task.

It started as a chance meeting at a masked ball. Felicity wanted to make sure she had a memorable first time before she’s married off to someone she doesn’t know. Nash’s night at the ball ends with memories of a perfect woman, one who left in the middle of the night. He has no idea where she is or who she really is. By chance Felicity is to be married to Nash’s brother but an arranged marriage is not what she wants. When she runs to avoid the marriage she is sent straight into the arms of the man she fell in love with on that one spectacular night. But what happens when her betrothed finds out she’s in love with his brother? There is still danger that lurks in the darkness around them, a traitor to their country, and they are beginning to learn who it is. Raven continues to draw us into this family and has us begging for more. It’s a fast read full of love, steamy sex, and intrigue. I can’t wait to find out how the series ends.

Nash is fourth of the children of Gerard Gretton to get his story in this historical romance series. Nash prefers the country to the city, and his hounds to society, so when his older brother, Peregrine, insists he attend a masquerade, all he wants to do is leave. However, he finds a masked woman seeking to slip away undetected and helps her out, then takes her to his townhouse and to bed. Felicity&#039;s family keeps telling her that she has to marry the man they have chosen for her, and before running away, she chooses her own man to take her virginity. After enjoying their evening together, Felicity disappears from Nash&#039;s life, not knowing that he is the brother of the man her family has chosen. When they meet up again, they find that they are mixed up in the ongoing intrigue that has been developing in the series, and have to go to unexpected lengths to stay together. I really enjoyed how this story played into the series as a whole. Each book overlaps in time to some extent, so that events are seen more fully as the series continues. Because of this, I think this book will be appreciated more by those that have read the previous three, although the plot is certainly explained well enough if this is the only one you read. Felicity and Nash seem to be a perfect fit for one another, especially as he finds a previously unknown well of strength within himself once he has someone he cares enough to fight for. I look forward to the continuation of the series, and especially want to see Peregrine&#039;s story unfold, as I think he has been secretly playing matchmaker for his siblings! The whole family, with their refusal to bow to society&#039;s rules and their staunch patriotism, are quite endearing. Nash&#039;s Niche is a must read!

I really enjoyed how this story played into the series as a whole. Each book overlaps in time to some extent, so that events are seen more fully as the series continues. Because of this, I think this book will be appreciated more by those that have read the previous three, although the plot is certainly explained well enough if this is the only one you read. Felicity and Nash seem to be a perfect fit for one another, especially as he finds a previously unknown well of strength within himself once he has someone he cares enough to fight for.