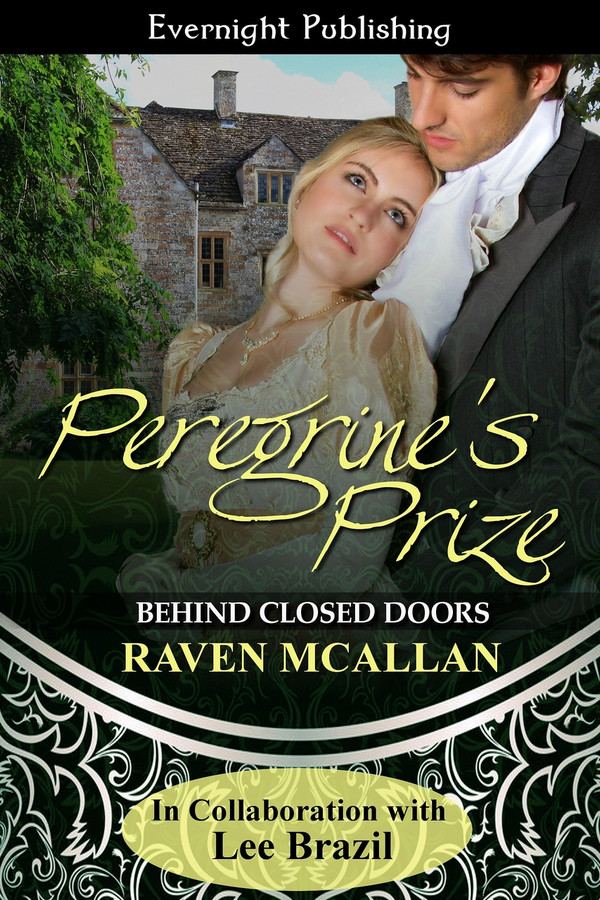 They called him Prosy Perry.

Anyone who really knew him—like Maggie did—understood that was a façade to protect his secrets. When danger threatened his family, and his lover, he dropped the role and the real Peregrine emerged.

Now all he had to do was unmask the traitor and live happily ever after. Was it going to happen or was he destined to be alone again?

Maggie tried to curl round to see Perry's face, but a combination of his hands holding her down as he rhythmically caressed her arse, and the way her gown twisted around her kept her captive. Even through her skirts his cock pulsed hot and hard against her quim. Somehow she doubted much sleeping featured in Perry's mind.

"You're supposed to rest," she said breathlessly, and bit her lip to stop herself moaning in pleasure. One finger stroked the cleft that separated her buttocks, sliding the silk of her gown up and down and creating perfect tingles and shivers.

"We can rest together. What if I need someone?" His voice was low and teasing. "I might, get out of bed and become disorientated. I might, oh have nightmares and need someone to cuddle me, and shoo the dragons away." Maggie sighed. It was so long since she'd seen this loving playful side of Perry. It showed rarely as he struggled with keeping his family together, and trying to uncover the spy ring that threatened their beloved country.

"You might not," she said prosaically. "I will only be across the hall if you call out."

"Not good enough. I might need my…" He paused and winked. "My hurts stroked away."

His cock twitched under her, as if to remind Maggie that was a part of his body that loved to be stroked, and she was always happy to oblige. She giggled and wriggled against him as best she could. His hand tightened and he laughed.

"I may have forgotten you, but my cock hasn't, it seems. So Maggie-mine, will you rest with me? Please?"

The hangdog, hopeful look was her undoing. This was the private lover of past times. The one she often worried she would never see again. "If you let me up, then I'll move into bed with you." Once more he slid the material he held along the cleft of her arse, and then she was loose.

"Naked." It was a command not a request. "Flesh to flesh. Breast to breast." He lowered his voice. "Cock to quim. I may be as weak as a kitten, and unable to act on my inclinations, but I need the contact. Just that."

Maggie scrambled off the bed, and looked at him. Pain lines reappeared threefold across his brow, and perspiration dotted his skin. She judged it best not to argue.

"I need a few minutes. I want to get a cool cloth, and some more medicine." She walked toward the door. "I, you, ah lord, we need you to be well my love. Then perhaps you will remember most, and we can tell you the little you don't."

"I just want you, Maggie." As her hand went to the latch he spoke in a low voice. The pain he was in was evident in the uneven tone, and the little breaks between his words. "I've missed you … I know I've missed you. How?"

What should she say? The doctor and Nash were both very explicit that he needed to recover his memory without help. She judged he saw her uncertainty, for he smiled in the most beguiling manner.

Maggie gulped and her skin crawled. "Of course we are. You are my world. But aught else I have been instructed to let you remember without any aids or hints."

He tilted his head to one side as, she guessed, he considered her words.

"Hmm, well I'm cold." The look on his face indicated anything but, and a wicked grin flashed across his face. It was all Maggie could do not to giggle. "Oh dear, that will never do." She began to undo the buttons down the front of her gown. His eyes followed her hands as they moved down toward her navel. When she got to the last two buttons she stopped and held her fingers over the closure. Perry groaned.

"Tease, you cannot stop there I need more. I want you naked next to me."

Maggie couldn't resist. Indeed why should she when she felt the same? She pulled the last two buttons through their holes and let her dress slip to the floor before she climbed up onto the mattress and knelt next to Perry.

He blinked. "I know you like this," he said in a hoarse voice. "You knelt next to me just so, and then, and then…" His voice trailed off and he put his fist on his forehead. "Damn, and then I do not know." He held his arms out and Maggie went into them gladly. Her body was on fire, for she well remembered what he did not … and what happened after.

"Take one moment at a time," she said, somewhat breathlessly. Perry might not consciously remember what, but his body and subconscious did. As she settled next to him all thoughts of what she'd been going to do fled. Anything else could wait.  One of Perry's arms went around her, and the other stroked her breasts. His cock was once more rigid and straining toward her, and he tangled her legs with his.

Perry feathered tiny nipping kisses over her neck, and his breath swept hot and exciting on her skin. She smelled the brandy Nash earlier coated Perry's lips with, and the soft musk of the man she loved.

"Show me, Maggie. Show me what we like, and help me to remember. Surely it's not mere sex, but love and excitement between us." He pinched her nipple just one tiny step short of pain, and Maggie melted. This was what she craved, and what Perry did so well. Nothing either Nash, Felicity, or the doctor said was going to stop her helping them to achieve full release, and hang what happened after. There was no way something so good could be bad for him.

Secrets. That’s what Perry has. He holds them close so others don’t use them against him. But keeping those secrets involves his siblings. He can’t do it all himself. Maggie wants her happily ever after, but due to circumstances out of her control that isn’t possible and won’t be in the foreseeable future. Those around her just look at her as another servant, except those who know the truth. When an attack happens and Perry is left for dead everything changes, for both of them. But will they be able to work together with his brother to find the perpetrator? When the battel ends close to home will good or evil prevail and will there be a happy ending. This is the final book in this series and it will be missed. There is the underlying story of their father but I think that is wrapped up in the end and if you’ve read all the books you will probably agree. Once again Raven has given us another series and a cast of characters to love, and even some to hate.

Peregrine is Lord Corby’s eldest son and heir to the Brigstock Dynasty. He is publicly known as Prosy Perry. Though he dislikes the label, the name serves him well as the perfect façade for his true nature. Loyal to the kingdom and working secretly for the government, Perry is busy defending the realm against Bonaparte&#039;s supporters who seem resolved to weakening his country. He is fiercely dedicated to his country and family, and can sometimes find the pull of both to be difficult crosses to carry. Both his work and his love life are sacred and secretive, and only his beloved Maggie knows his true nature. With Maggie, Perry can share his true emotions and be himself. When Maggie’s safety is called into question, Perry finds he must act swiftly, to save both his true love and his own life. Maggie has yet to become Perry’s bride, yet she never doubts for one moment that theirs is a love of the truest nature. Her gentle and loving ways bring out Perry’s tender and playful side; a side which isn’t always seen by the rest of society. When their blissful idyll is interrupted and Perry is called away on business, Maggie’s well being is threatened like it never has been before. Only when this happens is her true, courageous character seen by those around her. Hiding out as a housekeeper, Maggie’s resourcefulness is called upon, and when danger creeps slowly into her own life, Maggie proves her bravery can match that of Perry’s any day. Whilst Maggie keeps up the pretense of being housekeeper for Perry’s brother and his wife, her lover takes up a path of danger and subterfuge. Spies and traitors abound, with even a wicked lady villain thrown into the mix. When Perry becomes the victim of an act of hideous violence, it is down to Maggie and her resourceful ways to arouse Perry’s memory, in a way only she can. With a simple yet intriguing plot, Peregrine’s Prize unfolds itself to the backdrop of ambushes on the roadside, riderless horses, swift beatings and secret messages. Added to this is the sexual playtime of Perry and Maggie, which adds a spicy twist to this tale. The side characters of Perry’s family are well outlined, and even have their own stories in other books by the author. Their presence is not too overwhelming and I found that this read concentrates very nicely upon the main plot between Perry and Maggie. I liked the relationship between hero and heroine, feeling that both were portrayed to their best, both in and out of the bedroom. The plot moves swiftly along and is generously interspersed with sexy scenes and generous conversation, which again, allows the story to move along at a good pace. For a historical read with politics, intrigue and spicy sex, Peregrine’s Prize is a fun book to add to your reading collection. - See more at: http://www.coffeetimeromance.com/BookReviews/peregrinesprizebyravenmcallan.html#.UyXYHego5dh